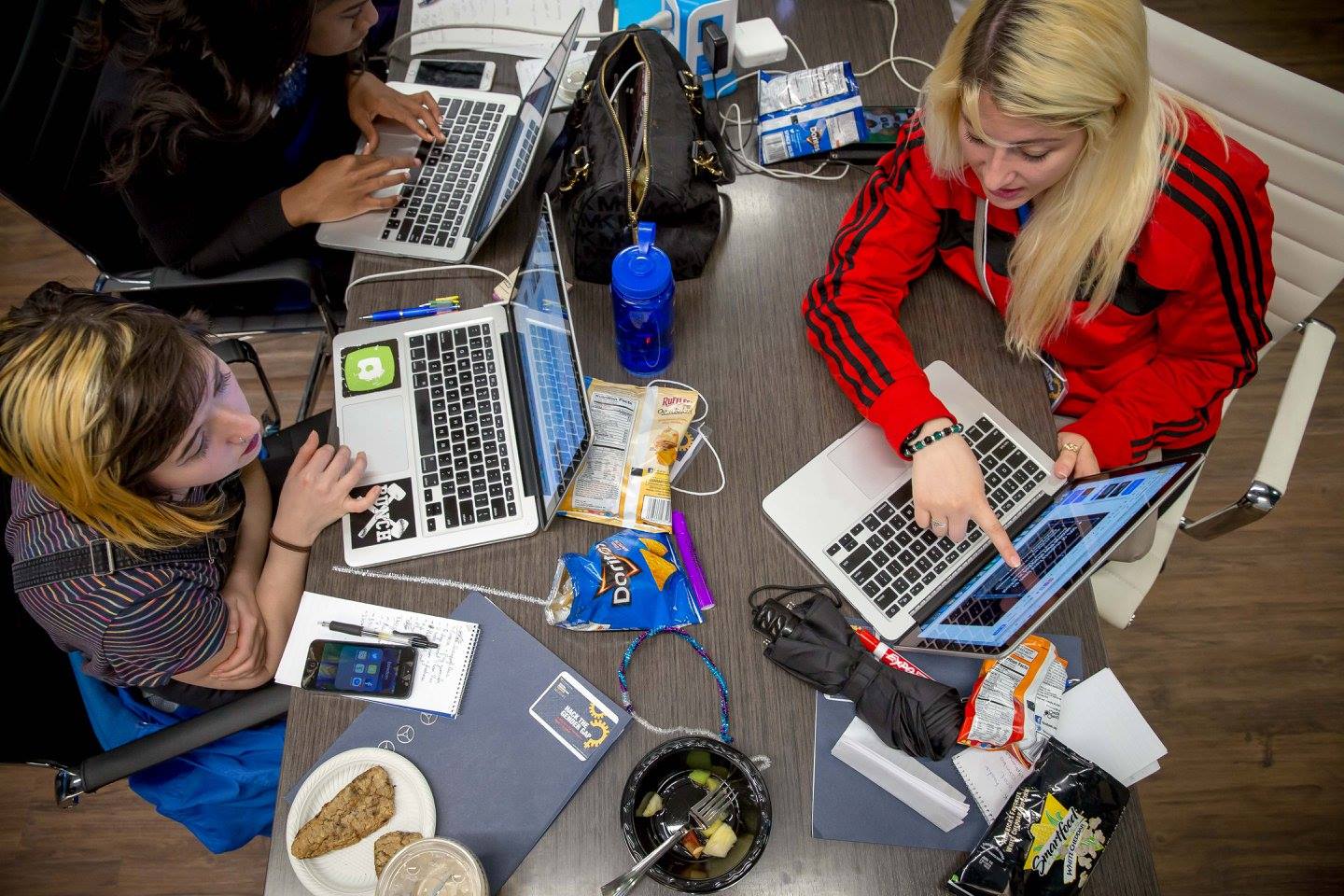 The following is coverage from West Virginia University of a recent ‘Hack the Gender Gap’ event, which MediaShift co-hosted with the Reed School of Media. See more coverage here.

Makers are going to make, so why not gather them in the same place to collaborate? That was the idea of the Women’s Internet of Things (IoT) makeathon, held April 1-3 at West Virginia University’s Media Innovation Center.

"I’m confident the gap will close one day, and I was glad to be one small part of the process."

More than 50 students from across the nation attended the makeathon, which was developed to empower women to experiment with and dip their toes into the IoT field. The weekend was packed with women tapping their potential to solve a current problem in the media industry.

The first night of the makeathon was all about getting comfortable with one another and meeting other women, from students to professionals.

The main activity was the introduction of do-it-yourself electronics in the “petting zoo” stations. There were gadgets and gizmos galore, from a hobby-computer called an Arduino to a 3D printer. WVU StreamLab’s technology called a “riffle,” a thinner Arduino, also made an appearance. Participants learned how to solder robot pins with blinky eyes that many of them proudly wore the entire weekend.

I was impressed at how quickly everyone picked up the new technology in such a short amount of time. These women were unafraid and ready to innovate.

The morning was a blur, filled with more meeting and greeting and a kick-off message via Google Hangout with Umbreen Bhatti. Bhatti, a human-centered design coach who focuses on real human needs, gave us a pep talk about how to be problem solvers, empathize with users and use journalism for the greater good.

And then came the challenge: Identify a media or journalism problem and solve it using the IoT. The “media” parameter was set wide on purpose, so the solution could range from focusing on fixing a problem for media professionals or just using an app. From there, we were set loose to start working in teams.

The organizers had divided us into teams, and our team name was derived from an object that each participant received when she arrived at the makeathon. My team – Team Scissors – was composed of Mary Chuff, a journalism student from Penn State; Birdie Hawkins, a strategic communications and recreation, parks and tourism resource student at WVU; Chelsea Bricker, a strategic communications student at WVU; and me, a journalism and wildlife & fisheries resource management student at WVU. Our mentor-facilitator was Kate Boeckman, a tracker of wearables and other new technologies for Thomson Reuters.

That was especially apparent after a thorough explanation of IoT from BuzzFeed fellow Christine Sunu. She inspired us with her talk about devices that automatically connect to the internet, like a coffee maker that starts making coffee an hour before someone’s first appointment on a Google calendar.

After going back to our group huddle room, we shifted our attention to a problem in the media. We wanted to focus our wearable on working women rather than the generation gap. Women in their mid-to-late 20s sometimes are unsure of how to make new friends, especially in a new location, and we wanted to create a way for working women to find each other, stick together and help each other.

After a hysterical and motivational presentation from Tiffany Shackelford of the Association of Alternative Newsmedia about how to make money off an idea, we returned to our room and pulled our two concepts together.

Thus was born the Bonobo (not to be confused with the men’s clothing brand). It’s a keychain that “checks in” a woman when she arrives at work via GPS. Her location pops up on the app, which includes the locations of other women in the network to show that, “We’re all in this together. We’re all strong women at work now.” Other features on the app include an advice wall, event postings and coupons for socials.

The name stems from bonobo apes because, in their society, females are the dominant sex. The Bonobo reflected the entire weekend of empowering women to chase after their dreams, despite societal boundaries.

After an exhaustive day of thinking and planning our idea, and the looming presentation, we called lights-out around 9:45 p.m.

The last day’s wake-up call was a presentation by Gina Dahlia, an associate professor of journalism at WVU. We learned all about how to give a killer presentation in fewer than five minutes, lessons that we directly applied to our pitch.

Our pitch was the focus of a two-hour brainstorming session on Sunday, and my team was excited and prepared. Putting the presentation together helped sharpen business skills I didn’t know I had.

At last, it was time for us to present our ideas to the judges. Seven other groups also presented unique solutions to completely different problems. All had excellent, impressive solutions. And then came the waiting game as the judges deliberated. Boeckman treated Team Scissors to coffee, and we nervously stirred our iced caramel macchiatos for what felt much longer than 30 minutes.

At last, they announced the winners. The Bonobo was not the winning idea, but that was OK. The judges were lovely and helpful and went through all projects, offering advice and tips for everyone.

Although we didn’t win, I was really proud of Team Scissors. We were five different women with totally different backgrounds who banded together to encourage others to do the same. The makeathon showed me that competition among women isn’t necessary and that we should build one another up instead of tearing each other down.

During the weekend, I witnessed feminine genius in a unique way. We will continue to hack the gender gap. I’m confident the gap will close one day, and I was glad to be one small part of the process.

Jillian Clemente is a journalism and wildlife & fisheries resource management sophomore at West Virginia University. She loves to tinker with all aspects of the Internet of Things and hopes to bridge the technology and outdoor realms to help better the environment. She is a writer, hunter, bird nerd and pun lover. @jillyclementine