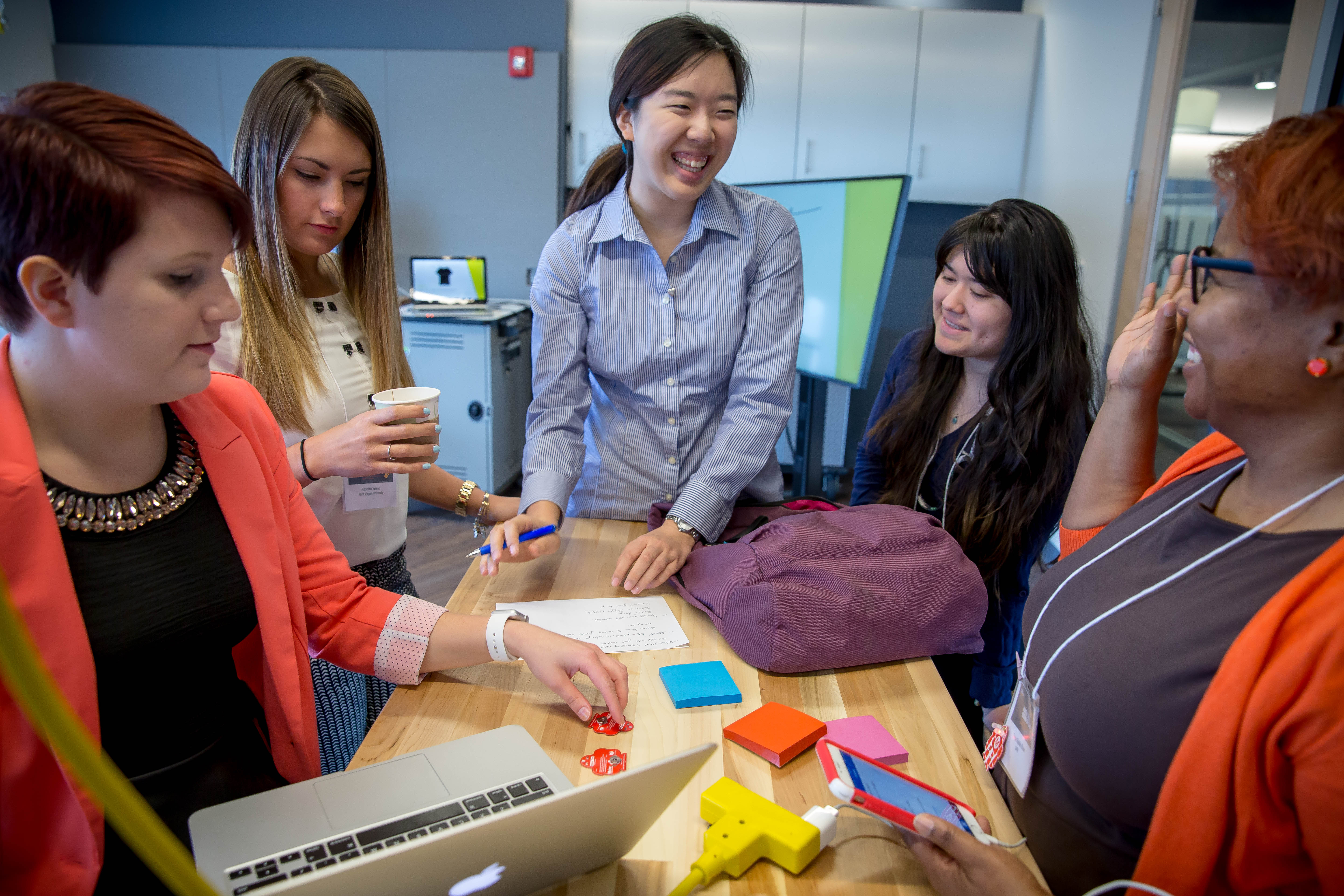 Team Clothespin works on their project at the Women's IoT Makeathon. Photo by David Smith / WVU.

Overheard at the Hack the Gender Gap makeathon: “I never heard of an Arduino … I thought it was that TV thing.” Another woman: “It’s a mini-computer.”

Conversations and questions like these were commonplace at the Women’s Internet of Things (IoT) Makeathon that kicked off April 1 inside the Reed College of Media’s new Media Innovation Center at West Virginia University. The event, produced by MediaShift and the college, brought together college-aged women to “envision their role and influence in the emerging ‘smart-world’ market” and help them see themselves as entrepreneurs and leaders in journalism and technology.

"It’s really critical that we create spaces for young women where they can ideate among themselves and support one another.” - Michelle Ferrier

The women worked in teams to conceptualize and create startup ideas to solve problems in media, then pitched their ideas to a panel of judges.

Click the image to read all the posts. (Photo courtesy of Al Tompkins, Poynter Institute)

The projects were expected to meet four main criteria: feasibility, viability, desirability and how well the project incorporated IoT elements. Keynote speakers, all female, punctuated the event with pointed messages about design thinking; the IoT and what its products look like; how to make money with your product; and how to present an effective pitch.

But why have an event like this? What does it mean for young women, and is it important for them to have events for only their gender?

The women rotated to stations of a “Petting Zoo” that introduced soldering skills with a “Makey” robot solder skill badge, created small projects like a buzzer and a blinking LED with Arduino microprocessor boards, checked out a 3D printer, and learned about a water sensor project.

The maker space in the Media Innovation Center at West Virginia University hums with activity as attendees of the Hack the Gender Gap Makeathon work on their “Makey” robot solder skill badges. Photo by Susan Zake.

In the “maker space” of the Innovation Center, only three of the 12 women in the room raised their hands when asked if they knew how to solder. They were encouraged to try it by Bob Britten, an assistant professor at WVU, and Christine Sunu, the GE Fellow in BuzzFeed’s Open Lab for Journalism, Technology, and the Arts, who offered words of wisdom like “Any day you make something is a good day,” and “It’s cool if you break it.”

Shaleah Ingram worked to correctly solder two LED bulbs to the red, robot-shaped shield. She laughed as some stinky smoke rose from the table. “I think I’m gonna make a fire.”

Shaleah Ingram, a senior broadcast major at West Virginia University, smiles as smoke rises from the soldering gun she is learning to use at the Hack the Gender Gap Makeathon. Photo by Susan Zake.

Growing up, some of the gender roles in her household were pretty traditional. “With my mom and my dad, when it comes to putting things together, he’s like ‘you’re not good with putting stuff together.’ He wants to do all of it…let me put this table together, let me put this cabinet together,” Ingram said. “I think [the Makeathon] switches the traditional role of what women can do.”

The feedback from those events was incredible, said Mark Glaser, MediaShift’s executive editor. Participants said, “I really learned stuff. I did something for the first time [that was] entrepreneurial. I didn’t get this at my school so much.”

Eunice Lee, a sophomore journalism major in the news and online track at Northwestern, is a student in the Knight Lab there.

“Events like this are a perfect fit for us,” she said, because they combine “all our loves” in technology and journalism. Lee attended last year’s VR conference and found the female companionship supportive, unlike the intimidation that might be found in the “very male-dominated” tech industry. She also found the entrepreneurial aspect valuable. “It’s a lot more tech-focused and interactive- and multimedia-focused, and so being able to maybe pitch an idea to wherever you’re working at…it’s going to be a valuable skill set. It’s frankly amazing.”

Her classmate at Northwestern, Rosalie Chan, attended a “really big” hackathon at the University of Illinois at Urbana-Champaign and found it to be “definitely overwhelming, like mostly men there.” The junior journalism and computer science major lamented the lack of diversity in the media industry and also in the technology industry. “It’s not really for women, and that’s ridiculous,” she said.

One of the teams works on developing its idea in a room inside the Media Innovation Center at West Virginia University. The team members are: Kate Boeckman from Thompson Reuters (far left along the wall), Jillian Clemente from WVU (plaid shirt), Mary Chuff from Penn State University (sitting in window), Birdie Hawkins from WVU (at board) and Chelsea Bricker. Photo by Susan Zake.

Dana Coester, the creative director of the media innovation center, sees events like the Makeathon as a way to honor the legacy of the university’s work in digital divide issues.

“We really wanted to do a Makeathon that was going to address divides, and that was the year ‘GamerGate’ sort of exploded,” she said, referring to the controversy surrounding a campaign of harassment and threats of violence made against several women in the videogaming industry. So the issue of the gender divide was the first one chosen.

As a self-described woman of technology, Coester sees it as a lonely place. For each of the last five years, she attended the Augmented World Expo, a conference and expo devoted to augmented reality, virtual reality and wearable technologies. Coester continues to be surprised that she is one of only a handful of women in attendance. “I keep thinking that next year it’s going to be different, but it’s not,” she said.

The issue of who “owns the system” has a profound impact on people’s lives, Coester said, but “the people who’ve written the systems — they did not design them for women. They’re not designed by women. The gap is going to get wider not narrower, and I’m also worried about it becoming even more intrusive and more insidious.”

Her concerns are echoed by Tiffany Shackelford, executive director of the Association of Alternative Newsmedia and one of the keynote speakers. In regards to women having equal opportunities with men in tech careers, she said, “The truth of the matter is that [the industry is] still a club, and it’s not getting better. In some ways, I think actually it’s getting worse.”

Tiffany Shackelford talks about how to market a product and have a strong business plan. Shackelford’s keynote was delivered largely in Dr. Seuss-style verse. Photo by Susan Zake.

Shackelford said Gen Xers like her have “just sort of taken on being men, right, like I act like a man…I think about my Naval aviator dad in my head and I think, ‘What would daddy do?’ And that’s how I act,” she said.

She said it worked to push her career forward, but “that’s bullshit and that sucks and that’s why these [events] are important.” Shackelford wants to teach women to “understand how to think, how to celebrate differences and how to say ‘yes, this is my point of view and we’re 52 f***ing percent so, yeah, you are gonna listen.’”

While driving to the Makeathon from Ohio University with her team of students, Michelle Ferrier, OU’s associate dean for innovation, research, creative activity and graduate studies, said the conversation in the car was about spaces where the female students were interacting with young men who didn’t know as much as they did but “had a bigger mouth.” She said, “It’s really critical that we create spaces for young women where they can ideate among themselves and support one another.”

She also cautioned, though, that there’s a “flip side” to the discussion, and that women need to “support one another in what we do and that women also can be trolls. We need to learn how to work and play together and not be crabs in a barrel trying to tear each other down.”

Members of Team Clothespin celebrate after winning first place in the Hack the Gender Gap Makeathon. The team’s entry was called CARDful and was designed to help college students monitor their credit and spending habits. (L to R) Rebekah Kambara from WVU; Trista Thurston from Ohio University; Antoinette Yelenik from WVU, who were mentored by Tanya Ballard Brown from NPR. Photo by Susan Zake.

The need to support each other is one of the points Maryanne Reed, dean of the Reed College of Media at WVU, hopes students take with them from the Makethon. It’s important, she said, to have professional colleagues and friends who “you can rely on as you go out into the world and you face some pretty difficult situations. Those networks are often what keep you going and help you move to the next level.”

She said the Makeathon is the kind of event “we should be doing as schools of journalism and media around the country…because that’s what we’re facing in the industry.”

Ultimately, Reed said, “We have to innovate or die.”

Watch a video slideshow from Hack the Gender Gap