At National Library Week, A Look At How Libraries Transform in the Digital Age 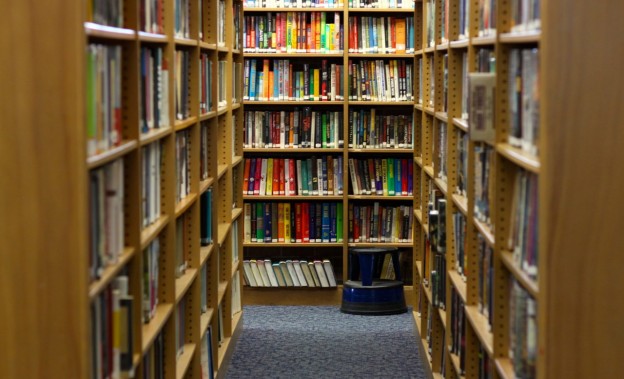 Two leaders in the United States’ library system’s new digital era — the ALA’s Sari Feldman and Bibliolabs’ Mitchell Davis — talk to Publishing Perspectives editor-in-chief Porter Anderson about the ‘creative commons’ that libraries have become, a community mecca for makers and a partner in grassroots creative leadership.

This year’s National Library Week, April 10-16, has special resonance and not just because Libraries Transform is its theme.

The real kick is that the campaign, led by the world’s oldest and largest such organization, the American Library Association (ALA), now has shifted its target: time to tell the public.

Initially, the smart graphics and “why the hell not?” attitude of the campaign rallied the library community, itself — librarians, their boards and their backers, essential stakeholders in a vast network of people in academic, public, school, government and special libraries: the 58,000-strong membership that forms the ALA.

“But now the campaign is external,” says ALA President Sari Feldman. The mode and methodology behind its launch last October, Feldman says, “is much more about getting policy makers, funders, and our communities engaged with this idea of library transformation, and then about how libraries transform individuals and communities.”

The core message is contained in this campaign video. The message: Libraries no longer are places in which you simply download bits of culture you need; instead, they are places from which to upload culture, contributing your and your associates’ creative work to the widening dynamic of a digitally empowered world.

In this video, you get a fast fix on exactly how this is not your mother’s library:

You catch the drift fast in those “because” messages — topical, contemporary, catchy:

The architect of this new messaging effort, Feldman is not just waving the warm-and-fuzzy banner of a nice press release at your inbox.

The seat of her intention is in the powerhouse Cuyahoga County Public Library system centered in Parma, Ohio where, as executive director, she’s establishing a series of Innovation Centers — with well-equipped audio and video recording studios for patrons to use at no cost.

“I like to say this is the ‘creative commons’ that has happened to libraries.

And when we brought Sari Feldman together for a joint National Library Week interview with Mitchell Davis, founding CBO of BiblioBoard based in Charleston, S.C., it was immediately apparent that they’re poster-executives for the public-private partnership that has enabled the American library system to blast past the nightmares of funding cuts now robbing the U.K. of more than 8,000 of its library jobs and hundreds of community facilities.

In the U.S., Davis points out, his BiblioBoard team is focused on something much wider than its SELF-e partnership with Library Journal that makes it possible for international self-publishing authors to get their e-books into libraries.

Meet Creator, described as “a Web-based tool that enables you to easily create and publish multimedia anthologies to the BiblioBoard library platform to share with patrons everywhere.” Creator is training cultural institutions — certifying them to join forces with their networked libraries — so that those community-based cultural outfits can reach their own constituencies and go far beyond them. The “Express Your Mission” Challenge is promoting the process, credentialing and empowering community efforts through just such library Innovation Centers as Feldman has pioneered in Ohio.

A Sense of Place for Digital Capability

“The library is like the antithesis of Amazon, in many ways,” says Davis, whose print-on-demand integrated systems company BookSurge was bought by Amazon in 2005, two years before the introduction of the Kindle, as the predecessor to what now is CreateSpace.

“The library is a human thing that doesn’t go away,” Davis says, “because we can get a package shipped from Seattle the next morning. The reality is that [a corporation like Amazon] can never care and connect with a local community the way a library will. And putting that sense of place into digital capability? — there aren’t any organizations that can do that other than public libraries.

“But it takes a lot of work, trying to get the funders to understand this,” Davis says.

“I did a paper on this, looking at the community engagement phenomenon as a whole. When I looked at where libraries were finding money for their work in supporting the maker space in their communities, it was all across the board. There was zero pattern. Funders just think it’s that important to support the maker space, and if it works, if it’s successful, then those funders will prioritize it and invest in it.”

“Mitch,” Feldman jumps in, “I couldn’t agree more, and you’re so intuitive to recognize this. You’re talking about libraries at the center of our community life, the place where we create equity and opportunity, and now, we create new culture.”

As an example of what Davis and Feldman see as this direction for libraries, when Feldman’s Garfield Heights design-and-prototyping Innovation Center opened on Feb. 12, county residents suddenly had free access to:

Library patrons simply take an orientation session, then get to work. The Cuyahoga system now is creating targeted programming for local entrepreneurs who will use these Innovation Centers to test and iterate their offerings. And these local branch libraries are transforming themselves into business-creation hubs.

A Sharing Economy Based on Trust

“I often talk about how libraries originated the sharing economy,” Feldman says. “We built a model that’s about that trusted relationship. I trust you to use my equipment, to be in my space,” just as her library has trusted its patrons to borrow those books for so much longer. And you trust me, a stranger, to come in and use everything as a platform for discovery and creation. We really have a deep history in that value around trust in the library.

“Today when somebody wants to use a new digital tool, that same sense of, ‘I don’t want to ask a question because it’s a stupid question, right?’ They can come to the library. It’s a place that welcomes them, embraces them, there are no stupid questions. You can trust us. And we trust you.”

Feldman credits the BiblioBoard SELF-e program that today is piloting its own platform for self-publishing at libraries, Pressbooks Public, with the broader context in which Innovation Centers now are arriving at libraries.

“We found out, using the SELF-e platform,” she says, “from our aspiring writers in the community was that what they really wanted was readers. They didn’t expect to become blockbuster bestsellers, although they probably wouldn’t turn their backs on that,” she says with a laugh. “But with what BiblioBoard has done, we have this platform that enables our aspiring writers, people who create around the word, to have readers discover them. That could never have happened.”

“And that’s about demystifying,” Davis says, “demystifying in the SELF-e case, what publishing is.”

The history of publishing’s traditional routes to a following — and by extension to a fan base of music lovers, or a lute maker’s coterie of devoted musicians, or a sculptor’s channel to art collectors — has been defined by scarcity, Davis says. This is the gatekeeping model that placed expert criteria between the maker and the potential audience-consumer. Just as SELF-e puts that potential readership Feldman is talking about within reach of local indie authors, the broadening mission of library-based maker support offers linkage, creative people producing and presenting and, with luck, winning a following, bonding with appreciative consumer-fans without the hobbling expectations of celebrity.

“To me, the thing we got right with SELF-e,” Davis says — and what he now expects BiblioBoard’s Creator program and Feldman’s innovative library transformation to reflect — “is an inclusivity and exclusivity” that comes from a much tighter loop of work and response than in the past. A writer, a maker, produces something; a straightforward community of support develops the exclusivity of acclaim at the end-user level instead of at a gatekeeper level.

“We have access to community in a different way than we’ve had before,” Feldman, the librarian, says. “We’re saying, ‘Don’t just come and be a passive recipient of books and information” at a library, “come and be an active creator. Meet the other creative people in the community. Impact the local economy.”

The library once was a temple of others’ information. Now, we have the participatory library, the library as interactive with the creativity of the community’s intelligence, enabling development and production.

“Coming into the library industry isn’t an easy thing to do,” Davis concedes. “We were lucky that our first customers were national libraries and archive programs, national libraries of Finland and Spain,” and London’s British Library. “As we got into the market and realized that we weren’t going to be an e-book vendor” such as Overdrive and other library-e-book distributors, “we developed Creator so we could engage with dance troupes and radio stations and bands and photographers and painters and everybody else creative in the community.

“The libraries have the people, the local knowledge, the space. We want Creator and SELF-e to be the operating system, the software that ties all this activity together. Record your album in the library, upload it with our software: we’re the place of debut. In May, we’re launching a public access site so that libraries aren’t the only places to roll out the work.”

“It’s evolving,” Feldman says. “This is working with libraries as partners, unique to the United States, the idea of libraries as vendor-partners” based in the creativity of the community.

“This is advancing the digital possibilities in our communities” Feldman says.

“And this is discovery marketing for libraries,” Davis says.

It may be time to go back to your local library.

Formerly an anchor, reporter, and senior producer with CNN and a critic with The Village Voice, Porter Anderson is a journalist and consultant focusing on the digital disruption of book publishing. He is Editor-in-Chief of Publishing Perspectives, the international trade-industry magazine created by Frankfurt Book Fair and German Book Office New York.

For more on the development of the Libraries Transform campaign and its launch in the autumn of 2015, here’s a video about the project: