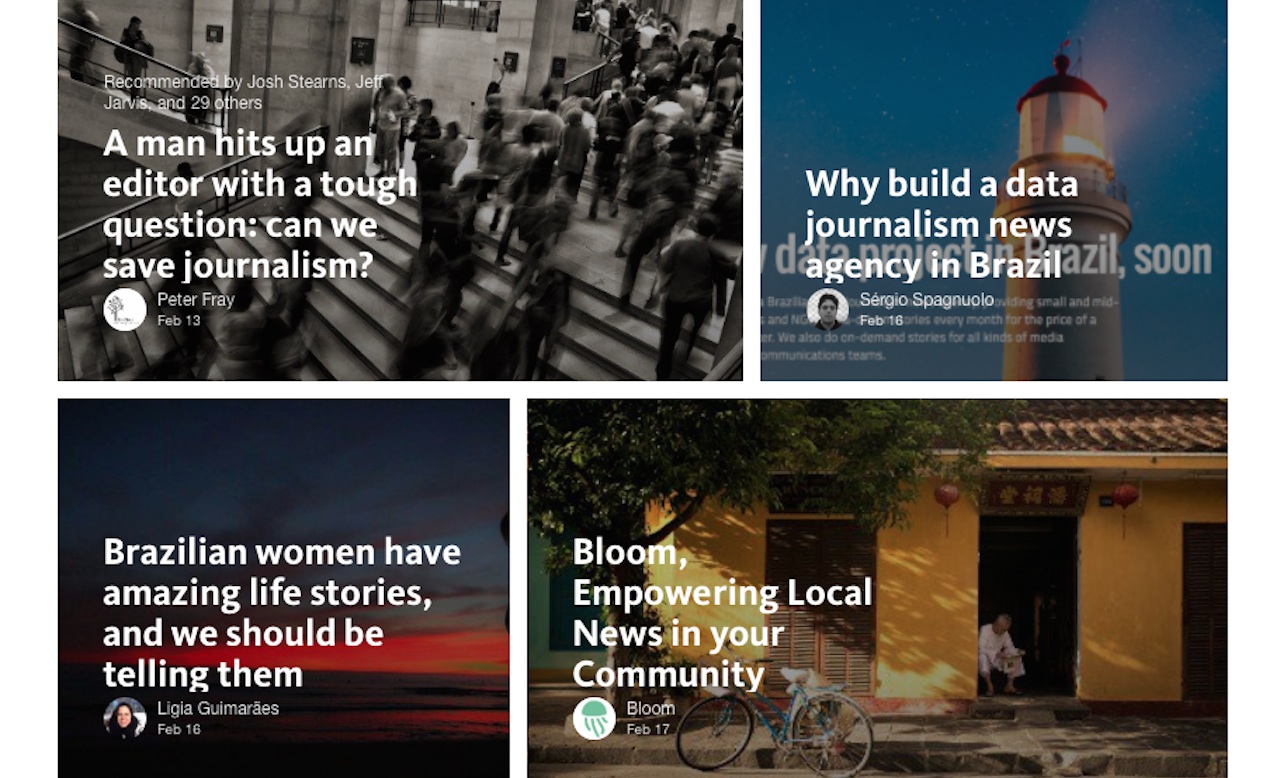 A screenshot from the Tow-Knight Center's Medium page.

Last month, CUNY’s Tow-Knight Center for Entrepreneurial Journalism welcomed 18 new fellows to New York City for a four-month exploration — and application — of entrepreneurial journalism. The 2016 cohort, which includes fellows from 12 different countries, will spend the spring studying entrepreneurship and building their own media startup ventures.

Past Tow-Knight fellows have gone on to launch successful startups around the globe, including the storytelling platform Narratively (Noah Rosenberg, class of 2012) and the Twitter search tool Keepr (Hong Qu, class of 2011).

The 2016 cohort, which includes fellows from 12 different countries, will spend the spring studying entrepreneurial journalism and building their own media startup ventures.

“I’ve been starting to go through and reflect on where our fellows have gone and what they’ve done since,” said Jeremy Caplan, director of education at the Tow-Knight Center. “It’s kind of exciting.”

Several of this year’s Tow-Knight fellows will be writing posts for MediaShift’s Idea Lab in the coming months, as well as posting regular updates on Medium. In the meantime, here’s a quick snapshot of four fellows and their projects, excerpted from the full list, here.

Bio: “Deniz Ergürel is a technology journalist and a social entrepreneur aiming to help people better understand the challenges and opportunities of new technologies, all in an effort to improve the quality of our lives. He is the founder of Haptic.al a news service that brings the best virtual & augmented reality stories.”

Project: “Haptical is dedicated to curate top virtual & augmented reality news from around the world in a weekly newsletter. The aim is to give decision makers and entrepreneurs a better understanding of the growing VR and AR markets.”

Bio: “Ghazala Irshad is a multimedia journalist focused on diversity, women’s rights, refugees, Muslims, and the Middle East. She is also a social media strategist with experience in the advertising and PR industries. Ghazala has eaten and Instagrammed her way around the world with the UAE-produced travel show Peeta Planet, tweeted the Arab Spring from Egypt, and taught photography and English to refugees from Southeast Asia to the Middle East. Her work has appeared in The Guardian, Gawker, Roads & Kingdoms, and more. Ghazala now aims to channel her experience and interests in a new venture as the founder of a travel community to connect young Muslim travelers and inspire immersive exploration.”

Bio: “Stephen Jefferson has been a software developer for the past decade, primarily working on freelance projects for small businesses.  Through experience, he has acquired a passion to also work outside of code and manage his own projects.  Stephen formed a nonprofit in high school to raise awareness for skateboarding in his hometown of Loudoun County, Virginia.  Stephen continued his entrepreneurial spirit by founding Bloom in 2014 to explore new opportunities for journalism.”

Project: “Bloom empowers local news to be shared more intimately with its community.  The platform allows journalists to leverage geography in their stories, offering readers a more personal experience for places they view important.”

Bio: “I am a journalist, researcher and editor with an academic background in journalism and media studies, and international development. I am also the founder of Her Zimbabwe, a women’s web-based platform promoting feminist thought leadership in Zimbabwe. With most of my work experience being in the non-profit sector, I am keen to use this opportunity with CUNY to enhance my understanding of for-profit media and revenue streams.”

Project: “Her Zimbabwe, which is an online startup gathering news, critique and analysis from young Zimbabwean women.”

The deadline to apply for next year’s fellowship program will be announced later this year. More information about the fellowship is available here.