Insights From the Launch of ‘Civil Comments’ at Willamette Week 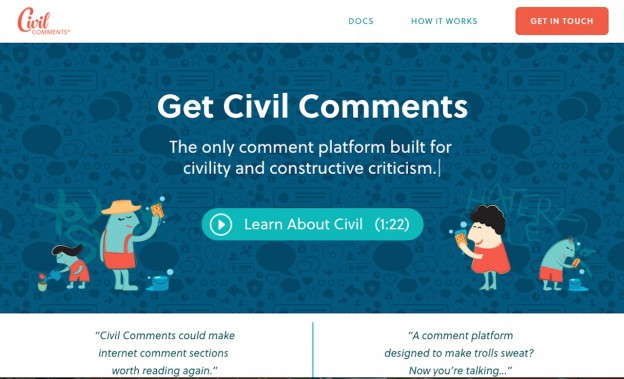 Civil Comments launched at Willamette Week, its first newspaper partner, last month. The Civil Comments platform aims to clean up the comments section by requiring users to rate submissions for civility and quality.

Lizzy Acker is no stranger to harassment in the comments section. As web editor at the alternative newspaper Willamette Week in Portland, Oregon, Acker used to spend untold hours breaking up vitriolic cyber-fights, censoring hateful comments and trying to moderate a digital trollosphere that never goes to sleep.

“There were certain people who spent more time on the site than me,” Acker said. “It could be really overwhelming.”

"People are talking about the facts and the issues, instead of calling each other monsters." - Aja Bogdanoff

Enter Civil Comments, a new platform that aims to clean up the comments section by requiring users to rate submissions for civility and quality. Civil Co.’s platform launched at Willamette Week, its first partner, last month — and Acker says the tone of conversation on the newspaper’s website has already improved dramatically.

“We haven’t seen any personal attacks and we haven’t had any spam,” Acker said. “The quality of comments is much higher.”

Insights from the launch

Civil Comments requires users to log in and rate four comments, including their own, for quality (not good, sorta good or good) and civility (yes or no) before their comment is submitted for consideration by other users. According to Aja Bogdanoff, CEO and co-founder of Civil Co., only about 2 percent of comments have been blocked for incivility so far — perhaps a sign that commenters are choosing to self-censor.

“We had expected a lot more rejections from the community, but people are not even trying to post the really awful stuff,” Bogdanoff said. “There are still plenty of people who are angry at each other, but everybody has been able to express themselves in a way that’s civil. They’re not name calling or threatening to kill each other.”

When Willamette Week first informed its top contributors about the switch to Civil Comments, Acker says the decision sparked some pushback from users who worried that the new system would discourage comments (by making the process more cumbersome) and stifle dissenting opinions. But so far those outcomes have been largely avoided.

Regarding freedom of expression, Bogdanoff says that Willamette Week’s users appear to be allowing unpopular and passionate submissions to go through, as long as they’re civil.

“It’s not a ‘kumbaya’ kind of thing happening,” she said. “The comments are still very vibrant. We’ve been happy to see that.”

There are also early signs that Civil Comments is turning the newspaper’s comments section into a more inviting space for new commenters. One reader tweeted last month that the platform had made him “willing to engage.”

.@HelloCivil has caused me to rediscover week. It’s become one of my morning routines. https://t.co/wBzOlATuHo — Matthew Bogart (@MatthewBogart) January 21, 2016

In terms of overall comment volume, the long-term impact of Civil Comments is still being figured out — but user contributions certainly aren’t taking a nosedive. Only 6 percent of all users have abandoned their comments before finishing the submission process, and Bogdanoff estimates that about half of those abandoned posts would have been rejected by the community anyway.

Overall, the newspaper’s comment volume has decreased about 20 percent since the launch, but Acker says that’s a reasonable trade-off, especially in the short term as users get familiar with the new system and begin to understand its benefits.

“Some of our old comments were ones we didn’t want on the site to begin with,” she explained. “I think the numbers are down more than we’d like overall, but we’re a place that’s interested in experimenting. We know we can’t expect to have everything perfect after a few weeks.”

The future of online comments

The launch of Civil Comments comes amid a growing debate about the future of online news comments. As I wrote in a post last month, many news organizations have chosen to nix their comments sections altogether, citing the abundance of hateful language and the challenge of moderating those posts. But other ventures, including Civil Co. and The Coral Project, are trying to figure out how to preserve the best of the comments section — diverse voices, community feedback, space for civic dialogue — without all the vitriol.

As Civil Comments prepares to launch with additional partners, Bogdanoff says she’s encouraged by the early results at Willamette Week.

“We’re watching these threads and saying, ‘This doesn’t even look like Internet comments,'” she said. “Sometimes it seems like people suddenly swallowed a dictionary. They’re talking about the facts and the issues, instead of calling each other monsters. It’s working incredibly well.”