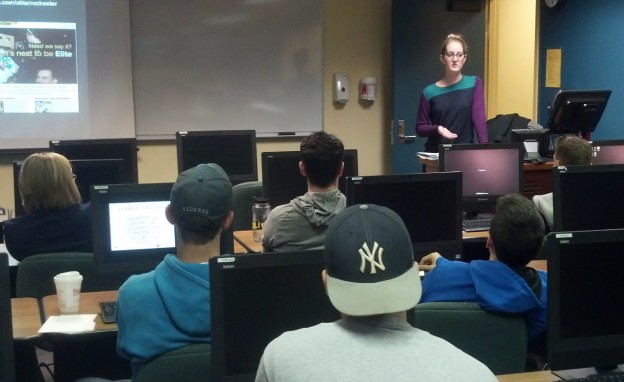 The vast majority of students — not to mention many teachers  — live and breathe social media connections. We tap into virtual communities for personal and professional reasons, integrating them with our “real-world” lives. At least at the individual level.

But what of the notion that online community can enhance and support in-real-life-community on a larger scale? How can we get students to understand that process? What real-world examples can illustrate it?

"The driving force is the engagement and finding ways to build that relationship among the community, yourself and the business." - Breanna Banford

A starting point, of course, is assigning as class reading some of the very smart thinking about building community engagement from people such as Steve Buttry, director of student media at LSU’s Manship School of Mass Communication; and Josh Stearns of The Dodge Foundation and its Local News Lab project. Jan Schaffer, executive director of J-Lab, similarly weighed in with a smart post reflecting on lessons from the civic journalism movement and their application to current efforts to foster more engaged, participatory journalism.

Collaboration, community conversation, and interdependence of journalists and their communities are all getting a lot of attention these days, and rightfully so. To quote Buttry, these are things that “elevate our journalism.” Readings on these topics help students understand and formulate best practices for using social media and other online tools to create community connections.

But connecting with community members on an intellectual level and supporting people as they actually build the real-life, interpersonal ties so vital to thriving communities aren’t the same thing. How can we help students understand the value that extending into the offline world has for the community-building process?

One way I’ve found to bring this lesson home is inviting a guest speaker who’s a local community manager for Yelp — the popular social media app for finding entertainment, restaurants and the like — to describe her community-building work.

San Francisco-headquartered Yelp has about 140 such managers in cities around the United States and internationally. In Rochester (NY) the position is held by Breanna Banford, a 27-year-old native of the area who moved to Connecticut for college but returned to Rochester to take a job there doing social media marketing for Xerox Corp. She moved to Yelp in January 2013.

Taking it to the streets

A major part of Banford’s job, naturally, is wrapped up in building the virtual community around Yelp. As part of her presentation she tells the students that “when you are in this world of social media, you need to be connected with technology 24 hours a day.” Most of her workday is spent on the Yelp site, she says.

Yet where the presentation gets really interesting, and valuable for the students, is when she talks about the part of her job that is aimed at “bringing people out from behind their computers to meet each other.”

The management of a virtual community is just the starting point, because the other side to her job entails organizing and promoting events that allow the businesses whose operations are covered by Yelp to show people what they can do rather than just tell them. “That’s really at the core of what I do,” Banford tells the students.

“It’s important for me, the businesses and the community to mingle,” she said in one recent class presentation, describing how her work builds real-world community. “The most beneficial thing I see when I host events is to have new friendships form,” she added.

Yelp’s main purpose in all of this, of course, is building its own brand while simultaneously promoting the businesses whose wares are rated, reviewed and commented upon by the online Yelp community. But the concepts extend nonetheless to journalism, anticipating new roles such as engagement editors — whose jobs seem very much like Banford’s in their focus on the online-to-offline community building.

Banford says that when she organizes an event the goal is to “to give an exclusive group of people an exclusive experience.” This sounds a lot like using events and membership as a value-added experience to being a part of the news organization’s community, as The Guardian and The Wall Street Journal are trying. In Rochester, Banford has been a part of launch parties held for new issues of (585), a Rochester-based bimonthly lifestyle magazine, which are a similar idea.

Overall, Banford’s description of her work and the impact it has on community-building is one the students find impressive and useful on a couple of levels.

First, of course, hearing about her job represents a tangible career in which students can use their interest and skills with social media. Claire Sauter said what she heard from Banford “translated into what I think I want to do in an actual position that I wasn’t aware of before.”

But they also come away with better understanding of the virtual community/real world nexus. Christopher Saar said the events Banford described would be “a good opportunity to meet new people. You could make real-life friends off that.” Gianna Sarkis said information from Yelp helps the restaurant where she works fine-tune its customer service.

Sauter observed that when so much online interaction reduces the need for people to meet in real space, it was good to hear of something that “brings the community together not just virtually but physically.”

Banford would agree with that. “The driving force is the engagement and finding ways to build that relationship among the community, yourself and the business,” Banford said, calling the result “a deeper connection you don’t get any other way. Because people need other people.”

Jack Rosenberry is a professor in the Department of Media and Communication at St. John Fisher College in Rochester, New York. He also is the research chair for the Special Presidential Initiative Research Call by AEJMC and a member of the Kettering Journalism Educators Learning Exchange.