Toward an Inclusive Journalism: Reflecting the Communities We Represent 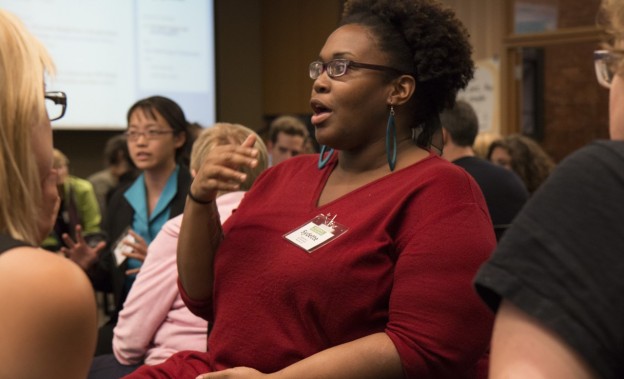 
“The newspaper has basically become a mirror for two percent of our population. The other 98 percent don't see themselves reflected in the news product.” - Michelle Ferrier

Last November, as racial tensions sparked mass protests at the University of Missouri, you might remember that journalists landed at the center of the firestorm they were trying to cover. The situation began when protesters, suspecting that reporters would spread only “twisted, insincere narratives,” established a “media-free zone” on campus that they attempted to enforce with a human blockade. When video footage of a confrontation between protesters and young photographer Tim Tai went viral online, the cybersphere erupted into debate over First Amendment freedoms and the rights they guarantee to reporters.

As an intrigued journalist, I read many of the explainers and op-eds written in defense of my craft. While I certainly agreed with the legal arguments, it struck me that the articles were often missing a much bigger question: Even with the constitutional right to practice journalism, shouldn’t we care about earning the social license?

At the Experience Engagement “un-conference” in Portland, Oregon, in October, this question framed many of the discussions about inclusive journalism and the need to reengineer the relationship between journalists and communities. But in the aftermath of the Missouri incidents, many observers around the country seemed immune to the idea that sticking a camera in a stranger’s face without their consent might be a little bit problematic, even if it’s legal. The result was a missed opportunity. In the rush to hail Tai as a “hero of journalism” and commend his courage and bravery, the media created a story about constitutional rights at the expense of a long-overdue examination of how journalism can better serve marginalized communities, especially those of color.

“It perpetuates distrust when journalists ‘commit’ acts of journalism in communities that have typically been disenfranchised from the news product,” said Michelle Ferrier, associate dean at the Scripps College of Communication and president of Journalism that Matters. “We have to build relationships with communities that we’ve never listened to before.”

‘Nothing about us without us’

To begin that process, journalists must first acknowledge that the deep public mistrust on display in Missouri didn’t materialize out of the ether. From the New Left demonstrations of the 1960s to the Black Lives Matter rallies a half-century later, journalism has fully earned its reputation for marginalizing and misrepresenting grassroots political movements and minority communities, a legacy on display in Baltimore and Ferguson last summer when reporters, as Washington Post contributor Terrell Jermaine Starr aptly puts it, “seemed more concerned with the property damage than with the emotional damage that prompted it.”

Meanwhile, there’s also a broader, structural problem at play. With advertising revenue drying up and circulation numbers stalling, many legacy media organizations have attempted to preserve their profit margins by cutting costs — a strategy that leaves their newsrooms stretched thin. The result is that time-crunched reporters must often settle for quotes from easily accessible “official” sources, excluding the vast majority of community perspectives. “The newspaper has basically become a mirror for two percent of our population,” Ferrier said in an interview. “The other 98 percent don’t see themselves reflected in the news product.”

Amid these trends, it’s hardly a surprise that communities feel wary about journalists. But it’s a big problem. Sure, citizens don’t have the right to enforce “media-free” zones in public spaces, but they do have every right to tell interview-seeking journalists to get lost, and there’s little reason to think they won’t. In the age of Twitter and Tumblr and YouTube, it takes only an Internet connection, not a printing press, to communicate with a global audience, giving protesters and other misrepresented minorities the choice to tell their own stories when they think journalists are dropping the ball. “There’s a power shift happening,” said Mike Fancher, former executive editor of The Seattle Times. “Journalists need to understand that it’s happening with or without them.”

If journalism is to remain relevant, relying on constitutional rights won’t be good enough. Journalists need to rebuild trust, especially in the minority communities that for so long have been neglected in the news. How to start? At our event, one answer came up again and again: “Nothing about us without us.”

The “nothing about us without us” ethos represents a departure from journalistic norms, which generally call for reporters to keep their sources at arm’s length and to avoid ceding any editorial control to folks outside of the newsroom. The thinking is that, as professionals, journalists are best equipped to decide what stories get told and how they get told. Any disruption to that top-down editorial flow is presumed to take too much time and to invite self-interested pushback from people who insist on a certain message or representation.

There are many situations when these editorial processes make sense, like when a story deals with corruption or malfeasance or any other issue that places the journalist in professional opposition to their subject. If one role of journalism is indeed to “afflict the comfortable,” as the saying goes, there will be moments when sharp elbows are what’s needed.

But the other half of that age-old saying, of course, is that journalism should “comfort the afflicted.” That’s a very different challenge, and judging by the mistrust of reporters on display in Missouri (and around the country), it’s an area where journalists are falling short. The “nothing about us without us” approach is an opportunity for journalists to reverse that trend by giving community members — especially the most marginalized — a stake in their own representation.

What does that look like in practice? Consider an example from Oregon, a state with a tumultuous racial history of its own. Nearly 70 years ago, the Vanport flood of 1948 destroyed the homes of more than 15,000 Vanport residents, most of them working-class and many of them black. The tragedy only deepened in the months that followed as displaced minorities struggled to find replacement housing in a city where African-Americans were excluded by law from most neighborhoods.

In the decades since, the media has covered Vanport’s legacy with occasional anniversary stories recounting the flood and including a few scattered quotes from survivors. This formula is a journalistic mainstay, but a series of recent Vanport storytelling projects offer a model for how journalists can do it better.

One of those initiatives, the Vanport Mosaic, is helping survivors share first-person accounts of the flood and its aftermath. The key is collaboration, said Laura Lo Forti, the project director. Rather than dispatching journalists to extract stories from the community, the project team is hosting free multimedia workshops designed to help community members tell their own stories.

These oral histories are being screened at historic churches and public libraries across Portland, drawing standing-room-only crowds to learn about the city’s legacy of racial exclusion — and to discuss how it still surfaces today.

“We are bringing the story back to the community where it belongs, but we’re also inviting a broader community to come learn from it,” Lo Forti said in an interview. “It’s an opportunity to have conversations that need to happen.”