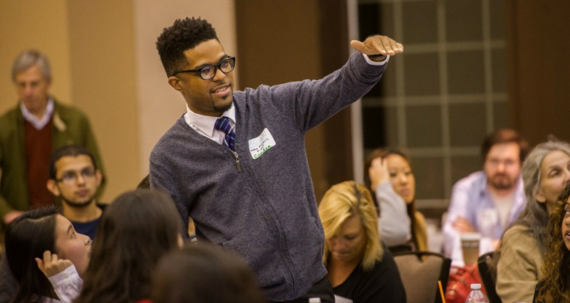 This piece was co-written by Mike Rispoli.

Engagement is a big buzzword in journalism today.

"If we had to put into one sentence what we’ve learned, it’s that creating a space for people to speak for themselves and listen to their neighbors is powerful, potentially even transformative."

News outlets across the U.S. are hiring “engagement editors,” employers encourage journalists to interact with readers online and through story comments, and new tools are constantly being developed to help newsrooms better reach their audiences.

All of these efforts go a long way toward bridging the gap between newsrooms and communities. But what if the future of journalism lies not only in building the right app or tech tool but in developing deep and meaningful connections between reporters and residents?

That’s what Free Press’ News Voices: New Jersey project set out to discover six months ago. We hit the pavement and met with civic organizations and residents to listen to their concerns about local news coverage. We went to local journalists to find out what they needed to better engage their audiences.

And we brought them all together at public forums to figure out how newsrooms and communities can support each other.

So far we’ve organized two such events, the first in New Brunswick and the second in Atlantic City.

While certain elements were constant, the people and conversations varied. We’re making plans for events in Asbury Park, Camden, Morristown and Newark in 2016.

We’re still experimenting, and we have a lot to learn, but here are the lessons we can share from the first six months of News Voices: New Jersey.

1. Journalists want to engage with their communities, but they don’t think they have the resources to do so.

We worried that reporters and editors wouldn’t want to participate in an open-ended conversation or risk getting criticized for hours on end about stories the community didn’t like.

We were pleasantly surprised all around. Almost every newsroom we spoke to was already on board with the idea of engagement, and all were open to participating in offline, IRL events. Many just weren’t sure how to do it effectively. The biggest question they always had was: How do you get people to show up?

Outreach isn’t easy. It involves building relationships with people over time; a lot of one-on-one conversations in person, over emails and phone calls; and showing up when the benefits of doing so aren’t entirely clear. When we explained that we were here to do that work, newsrooms were happy to accept the help and turn out their own staff. Some were skeptical — they’re journalists, after all — but they were also game.

2. Residents are eager to talk about the media’s role in the local issues they care about.

The communities where we’re hosting News Voices events are facing some pretty serious issues: job losses, wage theft, income inequality, housing, toxic pollution — the list goes on. We wondered whether the need for quality journalism would seem too abstract in contrast.

It turns out people are eager to talk about local journalism. And when we tell them they can play a role in coverage, they’re eager to know how. Among the questions that came up during the forums and in our post-event surveys were: How do the media choose the stories they feature? How can community members reach out to reporters? What makes a story attractive to a reporter? As one attendee put it, “How does the media work?”

We’ll be working throughout 2016 to come up with meaningful answers to those questions.

3. When community members are critical of the local media, it’s because they understand how important it is.

People don’t need to be told the media is important; they see its influence around them all the time. And when they’re critical of the media, it’s because they want and need it to serve them better. They may not understand the inner workings of story selection or the reporting process or how headlines get written, but they know those things matter.

When people complain that the press ignores their neighborhoods, it’s because they know that press coverage can get the attention of people in power and make change happen. When people complain that news coverage of their communities is too negative, it’s because they feel that news outlets have the power to dictate a narrative that becomes a self-fulfilling prophecy.

What we hear in these comments is people appealing to those in power (yes, those overworked reporters and editors may forget it, but they hold a lot of power). What we hear are heartfelt requests for more and better coverage. Those requests represent an opportunity to build relationships with new audiences.

When non-journalists talk about what matters to them, they talk in terms of issues: poverty, jobs, housing and so on. But journalists don’t write issues; they write stories.

So in our discussions, we try to help both parties translate issues into stories by teasing out those basic questions: Who, what, where, when, why and how. We start by asking about information sources: What would you need to know? Who would you need to talk to?

Once we drill down to facts and people, the narratives start to emerge. So do the points of access — documents, policies, specific questions — that can help tell the story.

This translation process is the most fundamental way we’re trying to show community members how to talk to newsrooms.

5. Every community’s engagement needs are different.

There’s been a lot of discussion this year about whether it’s possible for local news to compete nowadays, for money and eyeballs, with giant platforms emerging online. But Matt DeRienzo from the group LION (local independent online news) says we shouldn’t fret that cookie-cutter sites like Patch don’t work. “You can’t create the Pizza Hut of local news,” he wrote, “and who wants to eat the food at Pizza Hut over their local, authentic pizza place anyway?”

That’s how we feel about local news engagement.

Atlantic City is a very different place from New Brunswick — demographically, geographically, economically. In fact, each of the communities we’re working in has unique needs. The one-on-one outreach that goes into News Voices events gives us the opportunity to listen to what matters to people in each community long before an event, and then incorporate what we’ve heard. We may be using a handful of standard ingredients — most importantly, deliberative dialogue — but the specifics of our program and the design of our follow-up depend on the flavor of each place.

If we had to put into one sentence what we’ve learned, it’s that creating a space for people to speak for themselves and listen to their neighbors is powerful, potentially even transformative. Creating that space is the most valuable thing our project has done — so far.

But what we’ve heard time and again is that people want follow-up, especially in places where residents feel journalists have maligned or ridiculed them: “People come here, we have a meeting, we show up and talk, and nothing happens.” The more hardship defines a place, the wearier people are of talking about community problems. They want to start talking about solutions, and they want the news media to be part of that conversation.

That’s why we’ll be devoting much of our energy in 2016 to building the relationships and continuing conversations that begin at our forums.

We’re looking at setting up community advisory boards that would include both journalists and non-journalists who are invested in quality local news coverage. We’re looking at how we can help newsrooms pursue their own goals of audience engagement. We’re exploring ideas and resources from projects like Restorative Narrative and Solutions Journalism and seeing how they might respond to the needs and desires people have expressed.

And we’re learning as we go. For as much as we discovered in 2015, we know that 2016 will bring even more lessons.

Want to get involved in the News Voices project? Email Mike at [email protected]