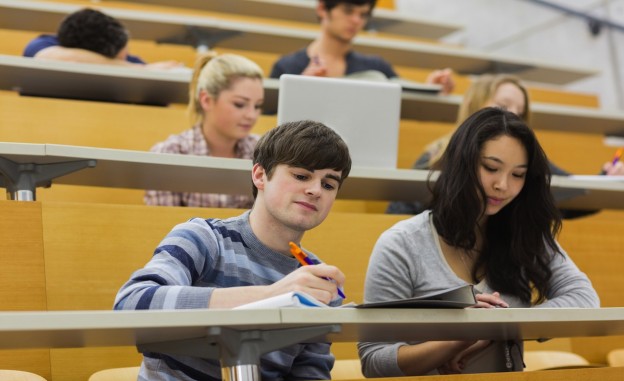 Melanie Deziel has an undergrad journalism degree from the University of Connecticut and later graduated from Syracuse University’s Newhouse School in 2013 with a master’s degree in arts journalism. Out in the professional world, she wrote a much talked-about investigative piece about women in prison for the New York Times and now works at Time Inc. She has enviable clips and a lengthy resume — a young journalist’s dream.

“You can’t work at a publication anymore and completely step away from how it makes money.” -Melanie Deziel

Except she’s not a journalist. Her job title is “director of creative strategy” for Time Inc., but Deziel calls herself a storyteller. “I’m trying to help brands understand how to tell stories in a way that’s editorial,” she said. “Sometimes I joke that I’m just trying to teach brands journalism.”

For years, journalism students have entered public relations upon graduation, finding more stability and better pay in an industry that valued their writing skills and media savvy. But today’s journalism graduates, like Deziel, have another option: branded content, the preferred digital term for what used to be called “advertorial.”

Deziel’s New York Times piece about women in prison? Netflix paid for it.

Good native content should mirror the brand that publishes it, said Deziel, whose first job out of grad school was as a content strategist for Huffington Post.

“When advertisers would reach out to Huffington Post in search of branded content, it was my job to use editorial sensibilities to come up with something that aligned with what they were looking for but also provided value for the readers in a way that they were used to from Huuffington Post,” she said. “So for us what was most native at the point would be listicles and slideshows.”

When she moved to the Times, the company wanted to publish content that fit the paper’s reputation and readers’ expectations.

“What’s typical in the Times is really valuable, in-depth reporting, so that was what they wanted to root their native advertising in, as well,” she said.

The result, the Times first “paid post” from in-house agency T Brand Studio, was Deziel’s 2014 reported narrative: “Women Inmates: Why the Male Model Doesn’t Work.”  Journalists on Twitter praised the story, and no less of a standard bearer than David Carr Tweeted: “All brand-sponsored journalism does not suck.”

Of course, all branded content isn’t deeply researched investigative pieces, either. Then again, neither is most journalism. But respected legacy media companies publishing branded content gave implicit industry approval to the form. And once that door opened, in came the money. According to research firm eMarketer, U.S. companies will spend $5.7 billion on native advertising in 2016 and nearly $9 billion by 2018.

That kind of financial promise is rare in journalism and a draw for those looking to apply their editorial skills to something more lucrative.

“I didn’t want to do something that always felt like it was dying,” said Jesse Oxfeld, a former editor at Gawker and New York Magazine who is now director of content at Vox Creative, the in-house agency for Vox Media.

“They sit down and have a series of brainstorms around ‘what can we deliver that will serve this client’s goals, make them happy, be interesting to our readers, and we can do at this price point?'”

Oxfeld becomes involved at the post-sale point, leading the native ad team to create the content the pre-sale team sold.

“To some degree, that’s basically being a magazine editor,” Oxfeld explained. “Working with in-house staff and outside freelancers to hone what it is we actually want to do, get reporting and research done, get things written, get photos, edit the copy, make the copy sound as good as possible, package it together, put in a headline and make people want to click on it.”

Those skills are similar to what’s taught in journalism programs, especially magazine classes, across the country. At Drake University in Iowa, home of the E.T. Meredith Center for Magazine Studies, Catherine Staub leads the magazine journalism program. A former magazine writer and editor, Staub also founded the content marketing firm Lexicon in 2003. Her students enter the program with hopes for traditional jobs at glossies, she said, but, nearing graduation with heavy debt loads and uncertain futures, they also see branded content as a way to use the skills they learned in school.

“Magazine journalists have absolutely all the skills and understanding and insight to be the perfect content marketers,” Staub said.

“While content marketing creates a whole new set of opportunities for magazine journalists, it is not the field for everybody,” she said. “It does require somebody who is comfortable mashing together marketing and journalism, and that is not right for everybody.”

Journalism schools have always taught ethics, but changes in the media industry have altered the conversation. The American Society of Magazine Editors revised its editorial guidelines in 2015, deleting a rule stating: “Editorial staff should not participate in the creation of advertising.” The new guidelines say only that the difference between editorial content and paid content “should be clear to the average reader.”

In a FAQ explaining the guidelines, ASME responded to criticism about the new language: “The guidelines concerning conflicts of interest and differentiating between advertising and editorial content effectively address the most important challenges arising from the practice of editors working on advertising.”

Failing to incorporate these industry realities into a journalism curriculum is irresponsible, said Elizabeth Hendrickson, a former magazine editor who now teaches at Ohio University’s E.W. Scripps School of Journalism.

“I know on the surface it looks like we’re arguing for the devil,” she said. “But without advertisers we’d be out of business.”

Grounded with knowledge about journalism ethics and best practices, students can decide for themselves what they’re comfortable pursuing and practice whatever they do in a professional, ethical way, Hendrickson said.

“We still have plenty of standards. We are still driven by these principles,” she added. “But I think to hold up these strawmen has no substantial benefit, not for students or practitioners.”

Practitioners may have already made up their minds about the supposed evils of branded content or at least acquiesced. In a 2015 survey of journalists’ attitudes toward native advertising, only 8 percent considered it the “death of journalistic integrity,” while more than 40 percent viewed branded content positively, according to eMarketer.

When Melanie Deziel graduated from journalism school in 2013 and got an offer to join Huffington Post’s native advertising team, she had to Google the term. Journalism students today don’t have the luxury to be ignorant about branded content, or any part of the business side of media.

“You can’t work at a publication anymore and completely step away from how it makes money,” she said.

While she knows the work she does isn’t pure journalism, Deziel says her success in branded content helps sustain it. Not that journalists-turned-branded content creators don’t have their doubts.

“There will be moments where you wonder, ‘What have I done? Can I ever go back?’” she said. “You have to temper that with the knowledge that you’re contributing to the newsroom and the publication’s ability to keep doing the thing you love.”

Correction: This post has been updated to correct the year Melanie Deziel graduated.