What Students Need To Understand About Covering Race 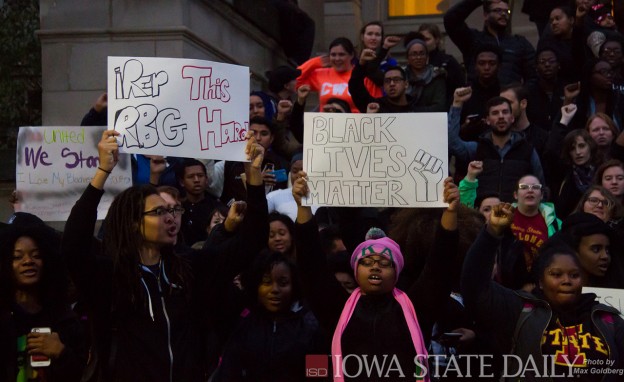 Protests at Missouri have led to the spread of demonstrations nationwide. Photo by Max Goldberg on Flickr and used here with Creative Commons license.

When University of Missouri student protesters’ clash with members of the media went viral last week, I couldn’t help but wonder how student journalists were faring.

“It’s their story, ultimately...When they said ‘no media,’ we said ‘OK, we get it.’” – Katherine Knott, managing editor of The Maneater.

Protesters called for no media presence as they camped out — saying they had finally created a safe space on a campus where being a student of color means encountering outward hostility from your fellow classmates — and bringing journalists’ identities into sharp relief. White people, by and large, react to conversations about race with varying degrees of discomfort, and the press remains mostly white — a problem that’s carried over into digital journalism, despite its promise of democratization through access.

The uproar called to mind my own experience covering race issues as a freshman student at the University of Wisconsin-Madison and a cub reporter with less than three months under my belt at The Badger Herald, one of the school’s student newspapers.

It was November 2010, less than two weeks after my newspaper had run a large photo of a white student dressed in a racist faux-Native American costume, headdress and all, front and center on the day-after Halloween issue. (It’s still immortalized in the photo slideshow, posted online with the story.) The photo sparked a lot of anger and hurt within the multicultural community. It was also another strike against the Herald, which, like scores of other news outlets, has a fraught history covering race issues.

Not long after that, the campus diversity office sent out an email to members of campus diversity organizations, offering students free coffee and bagels if they’d come to a “diversity photo shoot” for use in recruiting materials. Students said the move was disingenuous and a deliberate effort to misconstrue the experiences of students of color on the largely white Midwestern campus, for the price of free carbs.

Students convened for a meeting in the university’s multicultural student center to talk about next steps, and I was sent to cover the meeting. What should have been straightforward coverage of a meeting — the kind of easy story I cut my teeth on working the city news beat — devolved into a heated exchange, directed at me.

I was repeatedly asked to speak for the paper’s editorial decision to run the headdress photo and made every effort to avoid doing so, even as the situation continued to escalate. I felt panicked: I didn’t understand where the hostility stemmed from, I didn’t want to be part of my own story, and I felt suddenly, painfully unsure of myself.

I wasn’t sure if I was allowed to be there, in this university-owned space, as a fledgling journalist, but it was made abundantly clear that my presence wasn’t welcome. I was the only white person in the room. And I didn’t yet know that calling out racism is not mutually exclusive with journalistic integrity.

Tressie McMillan Cottom, an assistant professor at Virginia Commonwealth University, calls it a “divine feedback loop,” where journalists rely on their sources to call something racist and refuse to do so themselves.

“People see racism but no racists, and media will only report on what people say is racist,” Cottom wrote in a recent blog post. “The feedback loop can feel like a noose when you are organizing against the very racism people might agree exists but that no one will name.”

Being confronted by my peers was a proudly formative experience, in retrospect. But in the moment, I desperately tried to curry favor with the only student who would go on the record with me, but only if I would share my notes for the story before it ran — highly forbidden by editorial policies. I shared the notes in a desperate Hail Mary, I confessed the deed to my editor before the story ran, and I was suspended from the paper for one week, leaving me feeling deeply unhappy with how I had navigated the situation.

It’s all too common that student journalists are sent to cover tense situations, like last week’s protests on Missouri’s flagship Columbia campus, without being equipped with the necessary tools.

Katherine Knott, managing editor at The Maneater, MU’s independent student newspaper, said the news thrust her staffers, most of whom are freshman and sophomore students, into the ramped up pace of daily production, a significant uptick in producing from the Maneater’s usual once-weekly print product.

Knott and her staff covered for months the events leading up to members of Concerned Student 1950, a group so named for the year the university admitted its first black student, camping out on the Carnahan Quad: from the student government president posting online about being called by racial slurs, an anti-Semitic symbol scrawled in feces in a dorm bathroom, and dozens of other events captured in an oft-linked interactive timeline.

By the time the Missouri football team said Nov. 7 they would boycott all team activities in support of a graduate student’s hunger strike, the national media had moved in, and were met the following day by “no media” signs posted at the periphery of the students’ improvised campsite, declaring the area a “safe space.” Students wanted control of the movement’s message and worried the story would be misconstrued by the press – a decades-old protectionist mentality reinforced by coverage of last year’s unrest in nearby Ferguson.

Somewhere around the time the story went national, the narrative of students battling institutional racism shifted to students battling the media. And because hell hath no fury like a reporter scorned, members of the media vocally criticized the students for refusing them access, arguing that journalists are essentially entitled to stories told in public spaces.

“We (minorities) don’t necessarily always trust mainstream media to tell our stories the way we think they should be told because the history shows us that, time and again, we’ve had narratives that have demonized us or made us into violent people,” Cristina Mislan, an MU assistant journalism professor, told a Maneater columnist. “There are so many different stereotypes, and those stereotypes continue to be told (in the mainstream media). And we know those stereotypes because we live them.”

While Maneater staff weren’t involved in any of the headline-making clashes, like a student reporter’s impassioned First Amendment defense as a communications instructor at the camp called for some “muscle” to forcibly remove him, Knott said she wishes the staff had been better prepared for their presence as journalists to be actively challenged.

“I definitely wish we had given them more tools to be able to advocate for themselves,” Knott told me over the phone. “As students, we belong wherever students are allowed … I [want] them to have the ability to say ‘I belong here.’”

In one instance, Knott dispatched a young reporter to “have eyes” on the campsite after rumors swirled that the university chancellor was there, visiting with students. The reporter was looking on from the sidewalk, but protesters told the reporter she wasn’t allowed to be there, so she picked up and returned to the newsroom.

That reporter was legally allowed to be standing on public property at a land-grant university, which is abundantly clear now, just as I quickly realized that I was not beyond my rights as a student when I entered the multicultural students’ center as a freshman. But there’s a fine line between asserting your legal authority to be in a space and causing further strain to a community trying to heal.

Knott admitted her staff is not racially diverse, with an overwhelmingly white staff that mirrors the composition of MU’s student body. But she doesn’t think that much affects the way the paper has covered the protests, or any issue.

For some students, the campsite was their temporary home, and Knott said the Maneater had nothing to gain by being “combative” in challenging the protesters’ space.

“We aired on the side of respecting their space,” she told me. “It’s their story, ultimately … When they said ‘no media,’ we said ‘OK, we get it.’”

Knott said the paper needs to make a better effort to build relationships with campus groups who might not be readers before they find themselves at the heart of a big story. Diversity training is good, but relationships go a long way in building trust and later being allowed access. We also need to know more about any news sources that purport to be the voice of a community.

It’s critical for journalists to know the bounds of their own experience and how their background shapes the lens through which they view and report the world. There’s always a balance that must be struck protecting your rights as a journalist and respecting the rights of others.

Katherine Krueger is a writer and editor in New York City. She is a breaking news reporter for Talking Points Memo and University of Wisconsin-Madison alumna. She tweets frequently @kath_krueger.