In China, Harsh Penalties for ‘False News’ Could Muzzle Journalists 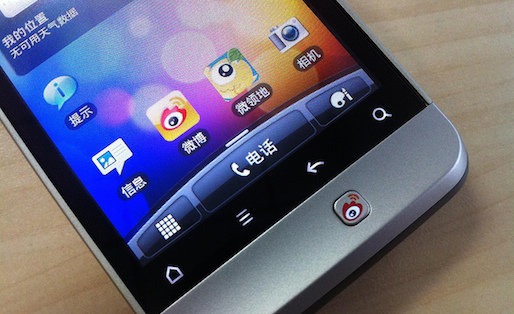 Weibo (second icon from left) is a Chinese social media platform popular among citizens looking for more authentic news across the country. Photo by bfishadow on Flickr and reused here with Creative Commons license.

China’s journalists and bloggers, already under threat of persecution, have faced new risks since November 1, when amendments to the country’s criminal law came into effect. Under the amendment, passed in August by the legislative body the National People’s Congress, those convicted of spreading false news about disasters or epidemics will face harsh penalties.

The clause added to Article 291 threatens a prison sentence of up to seven years for fabricating false information related to “hazards, epidemics, disasters and situations involving police,” or intentionally disseminating such false information that causes “serious social disorder.”

"With the vaguely worded clause about 'serious social disorder,' journalists whose reporting is deemed not in line with official narratives could potentially face charges."

The amendment can be used by the government as a way to deter independent journalists and bloggers from reporting on matters of safety and security. And, with the vaguely worded clause about “serious social disorder,” journalists whose reporting is deemed not in line with official narratives could potentially face charges.

In China, death tolls of disasters, epidemics and riots are a sensitive topic. Citizens’ distrust of government statistics runs deep but, as CPJ has documented, those who carry out independent investigations risk facing harassment or arrest. Without access to information beyond what the state provides, the government effectively determines what the “truth” is. Any journalists who report differently could be accused of fabricating news.

Rumormongering and its implications

The new amendment will broaden the scope of rumormongering that can be punishable by imprisonment. Journalists in the country already face the threat of charges for false news. In August, financial reporter Wang Xiaolu was accused of “fabricating and spreading false information about securities and futures trading” over his article in Caijing magazine that said the China Securities Regulatory Commission was examining ways for securities’ companies to withdraw funds from the stock market. The state press agency Xinhua reported that the article caused “unusual fluctuations” of the stock market. Soon after his arrest, Wang, who is in pre-trial detention, appeared on the official state broadcaster China Central Television (CCTV), apologizing for his “subjective” reporting that caused “a significant adverse impact on the market.”

“Anti-rumormongering laws are never really about deterring the spread of rumors per se,” said a Chinese journalist, who asked to remain anonymous for fear of reprisal. The journalist showed CPJ a report widely shared in China this month that wrongfully reported the death of a famous songwriter. The story first appeared on social media, and many news organizations, including CCTV, reported on it. The journalist pointed out the lack of official reaction to the false news and told CPJ the Chinese government does not appear to care about the spread of false information that is not politically sensitive. “Anti-rumormongering laws are intended to deter people from saying things the government doesn’t like. It is to create an atmosphere of fear,” the journalist said.

The new amendment is part of an ongoing effort to rein in online reporting and sharing of information on social media that the authorities see as dangerous and destabilizing. In 2013, the Supreme People’s Court and Supreme People’s Procuratorate — China’s top court and persecutors’ office — issued a ruling that social media users who post libelous information viewed more than 5,000 times or forwarded more than 500 times can be charged with defamation and jailed for up to three years. Sharing false information deemed to cause “serious social disorder” can result in a charge of “picking quarrels and provoking troubles,” which carries a maximum five-year jail term.

Sina Weibo is a Twitter-like service in China. Photo by Jon Russell on Flickr and reused here with Creative Commons license.

In December 2014, Ye Xiaozheng, a regular contributor to Xizi, a local news website in Huizhou prefecture, Guangdong province, was arrested and later charged with “picking quarrels and provoking troubles,” according to Radio Free Asia. The charge was in relation to articles he wrote on Internet forums Tianya and Xizi about an environmental protest. Police alleged that Ye fabricated and spread false information and that his articles caused a protest involving more than 300 people, according to the People’s Daily, the Communist Party’s official newspaper. Ye is in custody while he awaits the verdict in his trial, Radio Free Asia reported.

“The new amendment gives the government more convenient excuses to cover the acts of jailing innocent journalists,” the journalist, with whom CPJ spoke, said. With 44 journalists in prison as of CPJ’s most recent annual prison census, China is the world’s worst jailer of journalists. New regulations and laws like the one coming into effect Monday will give authorities more leeway to persecute the press.

Online reaction to the amendment has mostly been mocking. A post about it on Weibo account “Toutiao News,” which shares news stories, had attracted more than 1,900 comments by Thursday. The comment with the most “likes” that evening referred to how reporting by state media often contradicts the reality of a situation and asked: “With the new law, wouldn’t it be that organizations like Xinhua and CCTV…won’t be able to complete their prison sentences before the end of time?”

Yaqiu Wang has a Master of Arts in International Affairs from George Washington University. Her articles on civil society and human rights in China have appeared in Foreign Policy, The Atlantic, China Change and elsewhere. Follow her on Twitter @Yaqiu.