How the ‘Spotlight’ Film Gets Journalism Right 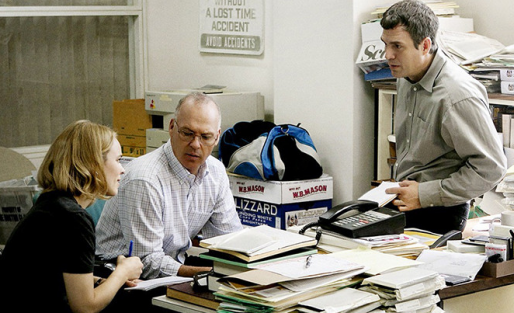 I don’t recognize most cinematic depictions of journalists or journalism. Caricature seems to be the default mode, and the people that I have been around my entire adult life become superheroes, cads, cynics and manipulators, working in a system that rewards volcanic egos, deeply rooted chicanery and excess at every turn.

“Spotlight” shows how the Boston Globe Spotlight team investigated the abuse of Catholic boys and girls by dozens of priests, and beyond that, how the church hierarchy covered up this epidemic for years. It’s a remarkable film — and I’m proud that three of the four Spotlight team members depicted are John S. Knight Journalism Fellowships alumni:

I’m certainly not the only journalism aficionado who admires the film. NYU Prof. Jay Rosen, who is not given to hyperbole, tweeted that it’s “almost a perfect movie. Subtle and restrained. And better than ‘All the President’s Men.’”

“Spotlight” gets the journalism right — the tedium, the obstacles, the stress, the sense of being mired in a story without fully grasping it. The perseverance. The doors slammed in your face. The unexpected revelation that unlocks a different door. And the magnitude of the endeavor.

Repeatedly, as the team is inching ahead in its reporting, helpful friends and colleagues warn them what they’re up against, with variants of, “Uh, you know that you’re going after the Catholic Church, right? And that this is Boston?” They do.

I was reminded of a scene in “All the President’s Men,” when Bob Woodward and Carl Bernstein go to Ben Bradlee’s house to tell him that Watergate is about to explode. Bradlee says to his young reporters, standing outside in the dark because they fear being bugged, “Nothing’s riding on this except, oh, the First Amendment to the Constitution, freedom of the press, and maybe the future of the country.”

Great drama. But in actuality, according to Woodward, that’s not what Bradlee said. What he said was, “What the hell do we do now?” Which is the right question, and the one that reporters and editors ask themselves every day: what do we do next to get the story?

The Spotlight team is inventive in figuring out how to get this story. They pore over Catholic Church directories from several decades to create a database — using VisiCalc! — of priests who mysteriously are reassigned after complaints of sexual abuse. And they post incriminating documents online, which is standard now, but not typical in 2002.

The JSK Fellowships doesn’t take credit for the great work that Robby, Sacha and Mike did on this story, of course. But we are proud of them. They are emblematic of our fellows and our program, and the film portrays them that way. They are devoted to their work, and to doing it to a high standard. Their humanity shines through in every scene, especially when they are dealing with sexual abuse victims or talking about the toll the story is taking on them. As Mike wrote to me in an email, “The truth is, we care.”

And they are seeking to hold the powerful to account, which was, is and always must be a core value of journalism. At their finest, our journalism institutions have been bulwarks against power, and especially the abuse of power. The church worked very hard to stymie the Globe. It threatened legal sanctions if the Globe used any information derived from unsealed court documents. The Globe was strong enough to resist. One of the realities of journalism’s disruption is that weaker journalism institutions cannot always resist.

There’s a wistfulness to much of the commentary about the movie, a wistfulness that reluctantly concludes that “Spotlight” chronicles a kind of journalism that is now lost. One commenter on my Facebook page loved the film but called it “old time journalism, the kind that doesn’t exist anymore and couldn’t happen today. A requiem for a lost profession.”

The Best of Journalism

“Spotlight” to me is not a paean to journalism’s past, but to journalism’s best. Lots of accountability journalism is needed, and lots is being done. The Associated Press investigation into seafood imported from a slave island in eastern Indonesia led to more than 2,000 fishermen being rescued. A quick scan of the Pulitzer Prize winners and finalists turns up more great examples.

And it’s not just the big guys. The 2015 Pulitzer Prize for Local Reporting was won by a team at the South Bay Daily Breeze, in Torrance, California. The Daily Breeze (circulation under 60,000) spent months decoding the Byzantine terms of the contract of the superintendent of a tiny school district, and found that he had been paid more than $660,000 — twice what the superintendent of the Los Angeles Unified School District was making. Investigations ensued, the superintendent was fired and legislation was introduced to hold school districts more accountable.

There’s lots of innovation in investigative/accountability journalism, coming not just from legacy news operations but also from organizations like the Center for Investigative Reporting, ProPublica and the Center for Public Integrity. We’ll be seeing a lot of great work in the next couple of months as we review applications for next year’s JSK Fellows. Year in and year out, and now more than ever, reading the great work that is being done and the great ambitions of people seeking to be fellows is uplifting and even inspiring for us.

Which brings me back to “Spotlight.” I spent the entire movie on the verge of tears — the kind of tears you get when your kid has done something you’re proud of. They were tears of pride in the craft of journalism that I love so much.

The John S. Knight Journalism Fellowships is seeking journalists and journalism entrepreneurs to join them in creating the future of journalism. The deadline is Dec. 1, 2015. Apply today!

Jim Bettinger is the director of the John S. Knight Journalism Fellowships program at Stanford University. After graduating with honors from the University of California at Santa Barbara in 1969, Jim Bettinger worked in daily newspapers for the next 20 years, as a reporter, editorial writer and editor at the Riverside (California) Press-Enterprise, and at the San Jose Mercury News, where he was city editor/AM. He was a Stanford Professional Journalism Fellow in 1982-83. He was named deputy director of the Knight Fellowships program in 1989, and he became director Sept. 1, 2000. In the department of Communication he has taught courses in opinion writing, feature and analytical writing, and literary journalism. He has also taught creative non-fiction in Stanford’s Continuing Studies Program.