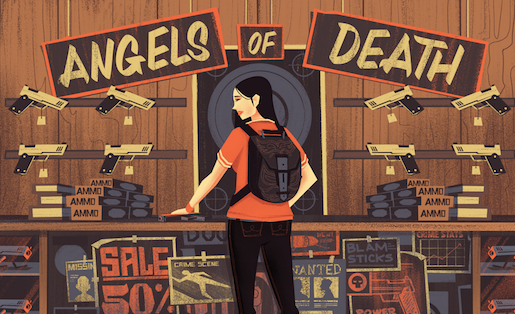 The story "Angels of Death," which was commissioned by the Contently Foundation, won an award for investigative reporting. Screenshot courtesy of Contently.

Click on the image for a look at the full series. Original photo by Jeff Djevdet and used here with Creative Commons license.

Anyone paying close attention to the sub-headline of the Guardian’s recent piece on corrupt justice might have caught something unusual: “Divorced mother Margaret Besen tells her five-year struggle to get justice, just one story in the hundreds of judicial transgressions across the U.S. revealed in a Guardian and Contently Foundation for Investigative Reporting collaboration.”

"What we are trying to do is say that great investigative reporting can be paid for by a for-profit corporation and non just non-profit entities." -Sam Slaughter

Just what is the “Contently Foundation for Investigative Reporting” and how does a content marketing startup, Contently, fit with investigative reports at the Guardian? It turns out that the Foundation was launched a little over a year ago, funded largely by the startup that was founded in 2010.

Whereas Contently pairs up brands looking to tell their own stories with writers skilled to help them do just that, its non-profit arm — the foundation — aims at both producing investigative journalism and training the next generation of investigative reporters. The collaboration with the Guardian is its first big tie-up with a major media outlet after publishing its own reports on Medium.

“What we are trying to do is say that great investigative reporting can be paid for by a for-profit corporation and not just non-profit entities,” said Sam Slaughter, the vice president of content at Contently. “Ideally, we’d like to see other brands and startups do something like this.”

Note: Contently also publishes The Freelancer, a magazine about the freelance industry, and MediaShift occasionally cross-posts stories from The Freelancer on these pages.

“It suggests that most investigative reporters see their bosses cutting back on investigative work and feel pressed to deliver quickly on those projects that are approved,” the Poynter Institute’s Rick Edmonds remarked when the study was released.

ProPublica, the independent non-profit newsroom focused exclusively on investigative reporting, started producing stories in 2008 to counter the idea that investigative work was a “luxury” few newsrooms could afford. Its financial model — funded by the Sandler Foundation and other philanthropic contributions — mirrors that of the Center for Investigative Reporting (CIR), the 38-year-old stalwart of investigative journalism endowed with support from foundations and generous individuals and families.

The Global Investigative Journalism Network has compiled a list of non-profit organizations around the world committed to investigative reporting. Clicking on the various organizations, it’s easy to see that most — if not all — of them also receive the bulk of their financial support from philanthropic organizations and individuals.

While the contributions these organizations make are undeniably positive, the financial models behind them aren’t as appealing to those eyeballing journalism’s financial woes.

A state-by-state data analysis on complaints against judges featured in a recent Contently.org investigation. Infographic by Contently.org and reused here with permission. Click to enlarge.

“In financial terms, ProPublica is a liability,” PandoDaily reporter Hamish McKenzie wrote back in 2013, in a piece that — as if it were predicting the future — speculated what might happen if a content marketing company like Contently were to finance an investigative journalism unit.

It was a thought experiment back in 2013, and while it’s come true in a certain way, it’s by far the exception rather than the norm.

“There are other foundations that do what we’re doing, but they’re in a whole different world than what we are,” Slaughter said, acknowledging that it’s rare for a corporation to fund investigative reporting. “But we founded it because we were journalists who were disappointed that mainstream media outlets weren’t doing the important long-form investigative work we believe in. And we were making money from the software business.”

‘Proof is in the Pudding’

That “software business,” of course, is Contently. As Columbia Journalism Review once put it, “Contently functions similarly to an ad agency, except that client brands get ‘content’ instead of ads.”

To ensure that no conflict of interest might occur between the kind of sponsored content Contently produces and the muckraking journalism the foundation might pursue, the Contently Foundation was established as an entirely separate corporate entity, Slaughter said. In addition to the Guardian, it’s partnered with the Atavist, Gawker and Medium to cross-publish content.

But should the journalism industry — and more importantly, the public — really trust a so-called brand agency with reporting public interest and accountability journalism?

“We have to prove it,” Slaughter said. “People trust the New York Times to cover the banking industry even though banks are advertised there. I think for us, it’s the same thing. If it comes down to investigating someone who’s a Contently client, we’re not going to let that stand in our way.”

And more than a year after its launch, Slaughter says “the proof is in the pudding.” The Foundation, which currently works with about a dozen mostly freelance reporters, has published six investigations, including one that won an award from the American Society of Journalists and Authors. Its editorial supervisor is Brad Hamilton, who previously headed the New York Post’s investigations unit and is helping build educational resources for the Foundation.

Margaret Besen filed for divorce from her husband, Stuart, in 2010. The question of whether justice was biased regarding their court settlement and other settlements is the topic of the Contently Foundation’s latest story. Photo by Alan Chin for Contently.org and reused here with permission.

The Contently Foundation doesn’t have its own office, and its reporters typically collaborate remotely via email — although they’re welcome to work from Contently’s headquarters in New York City if they want to, Slaughter said. Not having a physical office or full-time staff helps the Foundation keep costs low and puts 70 percent of what it spends into writers’ pockets, he said.

Whether other for-profit entities might move into this space is unknown. But Slaughter, at least, is confident this alternative model to funding investigative reporting can work, and that other philanthropic arms of corporations ought to focus on it as well. “They can do so effectively without tainting that non-profit,” he said.

As for where the Contently Foundation is headed next, Slaughter says he wants it to raise more money, spend more money, hire more journalists and do more reporting.

“The bigger we can get, the better we can do this.”