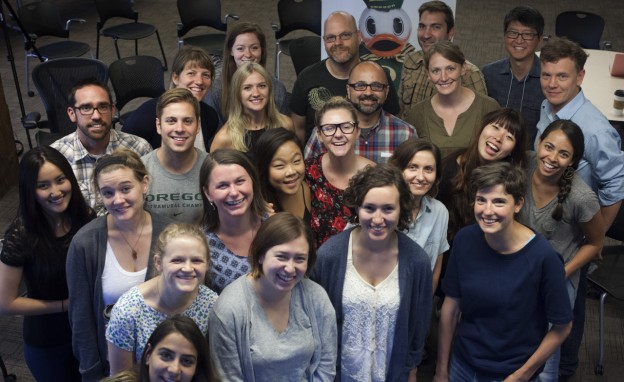 Story Arc students and coaches gather for a photo on the last day of the Story Arc Workshop. Photo by Rob Finch.

On Wednesday evening, University of Oregon master’s student Stephanie Essin and her team began with a story idea about a dancing clown. By Sunday morning, they’d crafted a thoughtful examination of racial identity and gentrification in northeast Portland.

“The story turned into something with a lot more substance than red noses and face makeup,” Essin said.

“The story turned into something with a lot more substance than red noses and face makeup." - Stephanie Essin

In June, the University of Oregon School of Journalism and Communication hosted its third summer Story Arc Cinematic Journalism Workshop, bringing 18 talented participants together with 6 professional coaches and giving them four days to develop a short work of cinematic journalism (with longer versions to be completed over the summer).

Co-sponsored by the Agora Journalism Center, the four-day Story Arc workshop reflected the Center’s twin pillars of media innovation and civic engagement. As participants interacted with their diverse set of subjects — from Portland’s first black, Muslim clown to a group of cancer survivors riding in the World Naked Bike Ride — they were encouraged to craft their stories within the context of community.

For the team coached by Blue Chalk Media associate producer Natalie Taylor, that meant understanding how Nicole McKinney, aka Nikki Brown Clown, had adapted to the steady push of gentrification in northeast Portland. One particularly poignant scene shows McKinney discussing how rising housing prices in Portland have driven black families further and further away from their traditional neighborhoods, making it more difficult for them to reconnect.

“Racial issues are very much part of the national conversation right now,” Taylor said. “I was really proud of the video we showed on Sunday morning.”

The team’s full-length video will be posted on the Story Arc website later this year. Here’s how it came together.

A storytelling workshop is certain to yield moments of crisis. In a sense, Taylor said, that’s its raison d’atre.

For Taylor and her team, the crisis began on Thursday afternoon, when during an interview with McKinney they sensed that their questions were falling flat. The team had arrived thinking that McKinney’s Muslim faith would be a central theme for the story, but after more than two hours, the interview had produced only isolated moments of compelling insight.

On Friday morning, the team met to devise a rescue plan, this time with the help of Rob Finch, Blue Chalk Media’s award-winning creative director in Portland. Finch’s outsider perspective helped move the story in a new direction. After reading the interview transcript, he pointed out that racial identity and urban gentrification — not religion — appeared to be at the heart of McKinney’s lived experience. The lesson: to find authentic stories, the first step is to listen.

On Friday afternoon, armed with a stronger focus, the team returned to McKinney’s home for a second interview. The change of direction paid off. This time, the conversation with McKinney was candid and revealing, and the insights were authentic. “Going back was absolutely the right decision,” Taylor said. “It turned out great.”

At the heart of Story Arc’s ethos is the belief that compelling narrative — not fancy equipment — makes for great storytelling. But when the two come together, the results can be pretty darn cool.

On Saturday afternoon, after two grueling days on the reporting trail, the team put their interview questions aside and set about filming Nikki’s performance at the “Good in the Hood” festival in northeast Portland.

Using Canon C100 Mark II cinema cameras, Essin and Zach Putnam captured stunning footage of Nikki Brown Clown dressed in full costume, dancing alongside members of her community. Putnam says the cameras allowed the team to shoot at cinema-quality 60 frames per second, without all the headaches that often accompany high-end gear. “I find Canon’s cameras intuitive,” he says. “And the footage looks gorgeous.”

Bruce Ely of The Oregonian, center, listens to student questions about his octocopter during the Story Arc Workshop at the George S. Turnbull Center. Photo by Wes Pope.

The cameras were part of an impressive suite of equipment that Canon loaned the School for the event. Park says when the company reached out last year to discuss opportunities for partnership, he suggested Story Arc. Come June, Canon delivered, sending more than $60,000 worth of high-end cameras, lenses, and other equipment, as well as a company representative to offer technical support and training.

“That relationship was a huge game-changer,” Park said. “Everything this year has a slightly different look because of the high-end cameras. It was a great privilege for Canon to agree to come.”

The Virtue of the Graveyard Shift

As Taylor’s team returned from filming on Saturday evening, time was running out to turn their hours of interview and B-roll footage into an edited project. By 9:30 a.m. on Sunday, they would need to prepare a roughly two-minute “scene” — essentially a preview of the longer story they’d be completing over the following weeks.

When Putnam, Essin, and LiLi Bayarmagnai met to begin editing, it was already 5 p.m. — less than 18 hours from show time. They faced a daunting task. In three days, they had collected more than four hours of interview footage — content they now needed to finish transcribing. By the end of the night, that transcript totaled 70 pages. “This team set a record,” Pope said later. “I think it’s going to be a record that lasts forever.”

At 3 a.m. Sunday, the team finally finished a two-minute scene to present just hours later. Taylor, who joined Blue Chalk Media in 2014, says the caffeine-fueled late-night blitz would help prepare students to succeed as professionals. “You’re usually going to have a crazy deadline in the professional world, so the time crunch is a good lab,” she says. “It puts people in this crucible where they’re able to shine in the moment.”

The team’s story about Nikki Brown Clown — and others from Story Arc 2015 — will soon be available on the workshop’s website.

Ben DeJarnette is a media researcher and freelance journalist based in Portland, Oregon. DeJarnette has M.A. and B.A. degrees from the University of Oregon School of Journalism and Communication, where he studied models of civic engagement in journalism. His writing has appeared in Willamette Week, The Eugene Register-Guard, Oregon Quarterly, and others.