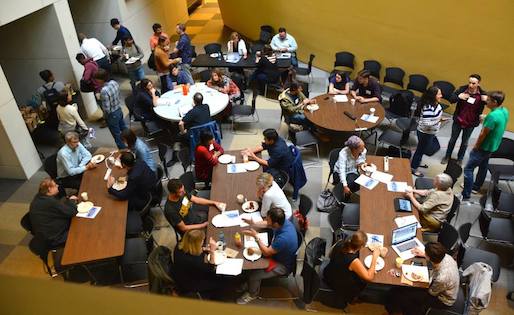 Collaborating at Collab/Space SF at KQED. Photo by Christine Rosakranse.

MediaShift’s Collab/Space SF workshop, which took place on Saturday, September 12, focused on a major question: How can great audio and podcasting startups survive and thrive?

With podcasting as the current Next Big Thing in media, it was a necessary question to address. And given the technology boom happening in San Francisco and Silicon Valley, it was also the chance to hear from eight different startups and media projects focusing on audio innovation. The event fittingly took place at KQED’s headquarters in San Francisco, the most listened-to public radio station in the nation, and was sponsored by the Donald W. Reynolds Journalism Institute at the University of Missouri.

Posted by MediaShift on Wednesday, September 16, 2015

What is podcasting anyway, and what is with the new wave of audio?, by Alivia Blount, Medium

“I had a great time and I really look forward to future sessions. If I could do this one again I would take back my lame, regressive, end-of-the-day intro answer as to what I had learned…and say instead that I am always inspired and enriched by a group of like-minded folks who are really doing things, but it isn’t always easy to say what was learned, at least not right away. I can say I learned I’m able to pull off a decent Donald Trump in a pinch, at least as long as my line is limited to a single ‘no.'” -Seven Morris

“Learned a ton and met some very interesting people. I think that the hosts did a wonderful job in setting a positive and energetic tone for the day and allowing us to have positive interactions with other attendees.” -Michael Winters

“I thought it was a great event and I’m really glad I went. I would only change one thing: the presentations and much of the day focused on the business end of the podcasting world. I would love to have a podcast day when we could focus on the nitty-gritty of storytelling through broadcast/podcast form. For example, show lengths — which is ideal for which type of podcast? Tone and themes of podcasts. Pace. Incorporating comments or no? What is the best way to engage the audience with your specific type of content? If you have a science podcast, what should you focus on? etc. Basically more editorial-type workshopping. Looking forward to the next one!”

“Collab/Space gave us targeted feedback on our startup, and introduced us to a community of experts motivated to help media thrive in the Internet age. I’m grateful to have taken part.” -Ben Werdmuller, Wavelist

“I wish we had had more time and a bit more of a structure so we could have addressed our challenges more directly. I don’t know if the improv approach really works for this type of conversation when there are limits to what is possible and we’ve already thought through so much of what was suggested but we couldn’t say that in order to direct the conversation on a more productive path.”

“I don’t think we needed to perform the skits. I think that the exercise of brainstorming a random podcast idea without saying ‘no’ was a really good one. It helped our team to have a productive discussion later in the day. But the purpose was accomplished without performing. I would have rather we used the time spent performing to have longer discussions with our teams, or to allow attendees to go to a second company for a different discussion.”