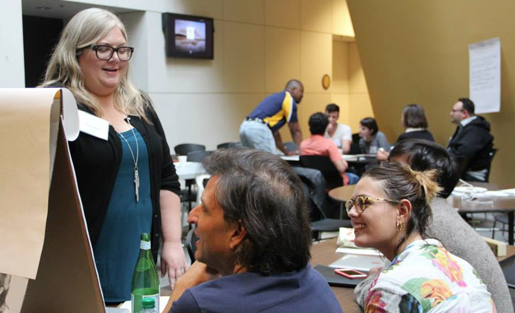 At Collab/Space San Francisco, dozens of audio journalists and podcasting entrepreneurs came together to discuss the future of their craft. It was my second Collab/Space, and like the first one in NYC, the event did not disappoint. No one can solve industry problems on their own, but together we would try.

"The path to innovation isn't shaped by apps and platforms, but instead by the power of community, the spirit of collaboration, and the ideas we find in one another."

As a visual journalist, I was an observer, deeply curious about audio storytelling but without the experience of a seasoned professional. Fortunately, it didn’t matter. I was in excellent company.

The Future of Public Radio

I quietly perched in the back as Steve Henn, NPR’s technology correspondent, delivered an eye-opening presentation about the future (and challenges) for NPR.

Topics like fundraising and underwriting, synonymous with advertising in public media-speak, quickly surfaced. Public radio, like other legacy news industries, was in the middle of an existential crisis. At NPR, the local member station model needed to evolve, but how?

The audience rippled with questions after Henn’s presentation. Amid corporate mergers, is there a difference between public and private media? How will local public radio stations survive? Should they exist at all? The answer was yes. At least, for now. Sara Sarasohn, a public radio veteran working on NPR One, insisted that the best audio storytellers were still in public radio, and audiences want to consume local content. Her words rang with optimism. The perfect hand-off to a group of entrepreneurs who were ready to change the game.

Channing Kennedy gets in the spirit of the afternoon improv exercise. Photo by Laskshmi Sarah.

Teams from Audiosear.ch, PodClear, Radio-Canada’s Thematic Audio Thread, Raur, CIR’s Reveal News, SpokenLayer, Streamr and Wavelist presented their products in a typical five-minute startup pitch and atypically laid their souls to bare. They outlined the challenges they faced  (scaling was a common thread), which would be the focus of breakout group brainstorms to find potential solutions.

This is what Collab/Space does best: Invite individuals who care about the cause, regardless if they’re a reporter, editor, developer or visual journalist like myself, and tap into their creative juices to help organizations tackle important challenges.  SpokenLayer needed to connect with more media companies. Reveal and Audiosear.ch needed to scale their operations.

It wasn’t about finding the right answer or the best solution. Rather, the mission of bringing people together created a powerful source of ideas, and even more important, connections. The day-long event at KQED was a refreshing reminder that the path to innovation isn’t shaped by apps and platforms, but instead by the power of community, the spirit of collaboration, and the ideas we find in one another.

Ok. #NoLie going to #CollabSF was one of the best decisions I've made in ages. Met so so many great, kind, smart, helpful ppl!

Yvonne Leow is a recent graduate of the John S. Knight Fellowship at Stanford University this year. She was previously a senior associate at North Base Media, a venture capital firm investing in journalistic enterprises in emerging markets. Before she transitioned to the business side, she was the director of video at Project Thunderdome, where she created and led a visuals team to produce fun and impactful multimedia projects. Prior to that she was a regional video producer for the Associated Press and a video journalist at The Seattle Times. Now she spend most of her time experimenting with mobile messaging and exploring new media business models. Outside of the newsroom, she is the vice president of the Asian American Journalists Association and a member of IRE | NICAR and the Online News Association. She has taught visual storytelling workshops at local newspapers across the country, Chicas Poderosas, NPPA’s Multimedia Immersion workshop, and was an adjunct professor at ASU’s Cronkite School of Journalism.