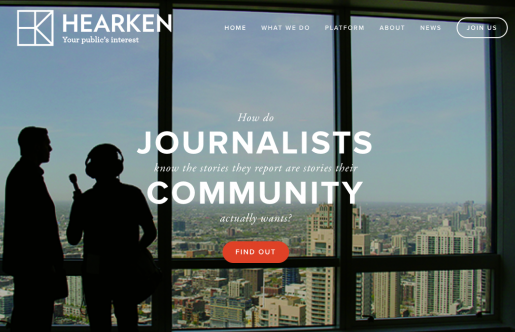 Hearken invites the public into the reporting process by allowing audiences to suggest story ideas, vote on their favorites, and provide valuable feedback when choosing stories to assign.

I’ve been obsessed with one particular (and surprisingly provocative) question about the news industry. And so I’ve been posing it to all kinds of journalists and newsrooms. It is: How do newsrooms know the stories they report are stories their audience wants or values?

I have yet to find anyone with a satisfying answer to it. For the most part — this is what happens after I ask it. It’s usually followed by a long, uncomfortable pause, lots of umms. Some journalists are offended. They say “it’s not my job to report what the audience wants” (exposing underlying assumptions that either the audience doesn’t know what they want, or if you asked them, they’d want idiotic stories or stories that aren’t “important”).

"While oftentimes journalists make great choices and have noble measures for decision-making, they've been protected them from the messy business of actually learning what their communities want to know and then delivering it."

The journalists who aren’t offended by the question usually default to answers about “news judgment” or “gut feel” or proof around metrics (clicks, shares, etc.). Some reporters say they examine popular stories, try to decipher what exactly made that story get a lot of shares, comments, (i.e. popularity) and then attempt to repeat that thing, with mixed results.

Metrics are of course important, but the approach of letting the metrics drive decisions is still like driving a car with the rear view mirror. You’re oriented toward what’s already passed, toward decisions that have already been made — not what’s possible.

What do audiences want?

Good news, though. I have gotten a few refreshingly honest responses from reporters to that question: How do you know the stories you report are stories your audience wants? But everyone wanted to be anonymous.

We have no evidence. Our newsroom chases the topics we can get money to cover, not what our audience has shown they actually want.
— Anonymous reporter 1, Kansas City

Until you asked that question — I just assumed this is the way to do it. No one in the newsroom questions why we choose the stories we do, and now that I think about it — it’s kind of messed up.
— Anonymous reporter 2, Miami

I do not know. (How many people have just admitted that?)
— Anonymous reporter 3, Chicago

Not many reporters have just admitted that. And for some reason, this critically important question is one that reporters and newsrooms have been able to get away with not having an answer to for a really long time.

Journalists have long enjoyed a default status as appointed authorities, despite there being no license needed to be a journalist, no test to take. I myself benefited from this state of affairs and got into journalism accidentally.

Journalists aren’t the only ones who ask great questions or have great story ideas. But they’re the only ones who get to to pick and choose the stories they find valuable, or what they think their audience will find valuable. While oftentimes journalists make great choices and have noble measures for decision-making, they’ve been protected them from the messy business of actually learning what their communities want to know and then delivering it.

I believe not having a good answer to this fundamental question — and a strategy to match — is the dirtiest secret and biggest problem facing journalism. After all, if you’re not making content people clearly want and value, your business model is at odds with the digital era — in which clicks and shares and time on page mean dollars, and news consumers have unlimited choices for stories that are personally relevant. And it’s not like the news consumers don’t know what information they find valuable. They’re site-hopping and Googling it all day long, every day.

The problem is while people can find information about almost anything, it’s still hard to trust information offered by random people. How do we know that the stories and answers offered by strangers, or the articles from these endless newly minted sites, are true, aren’t biased, have been fact-checked, vetted, approached through the lens of fairness?

That’s after all, what journalists and trusted news brands are supposed to offer. But journalists aren’t usually the ones filling out Yahoo Answers or Quora. And despite the feeling that we can learn anything these days by digging deep enough online, all of the information people wonder about, look for and desire isn’t necessarily Google-able, and most of it hasn’t gone through the rigor of journalistic processes.

So returning to the scene of the question: How can journalists know the stories they report are stories their audience wants? There are myriad, legitimate ways to answer it.

I have one framework to offer I’m calling “public-powered journalism.” (Please feel free to use the term, too). It’s not user-generated content. It’s not crowdsourcing in the traditional sense. With public-powered journalism, journalists still do their important and necessary jobs of making fair decisions, gathering the facts, synthesizing complex information and making it digestible. The public is not responsible for generating the content or providing answers.

It’s that the public gets a direct say, and actual direct power in what journalists are reporting on. People (who are not journalists) get to put forward what they want to know, and there’s a process for newsrooms to respond accordingly.

Reactive stories are what most people think of when they think of “the news.” It’s when reporters react and report on what’s happening in the town, the region, the world, the industry. Examples: This building has burnt down. This person is running for office. This team won. So-and-so said this shocking thing. This pig pooped in a cop car.

ted stories happen because someone in a newsroom (reporter, editor, producer, etc.) has come up with an idea, noticed some trend, or knows some piece of information they think is worth spending time and resources to cover. Press-initiated stories can lead to incredibly important investigative, enterprise pieces, because oftentimes the press is privy to trends and information most people aren’t.
But those breakout stories don’t happen every day. What does happen every day is someone in an editorial meeting brings up an idea they have and that group of people in power debate the merits of that idea using their particular news filters, until that story idea is either approved or killed.

Either way, in both reactive and press-initiated stories, the audience isn’t brought into the process until it’s too late to say whether or not they wanted they story. Instead they’re let in after all the major decisions have been made about what to report and why, after stories are published, and after reporters have moved onto their next assignment.

But now imagine a different process. Imagine there are more people than the few journalists and editors in that room putting forward great ideas for stories and making decisions on what to report. Imagine lots more people from the community get to weigh in, anyone gets a seat at that table. And imagine their ideas and level of interest actually matter.

Imagine there’s a process by which they don’t need to know an actual journalist to be invited into that room, or to need to know someone who knows someone who knows a journalist to get their questions answered, or idea made into a story. Imagine that email or Tweet they sent with an idea actually made it out of the bowels of some reporter’s inbox and into true consideration. Imagine that journalism, one of the most important institutions protecting our democracy and shaping our collective understanding of what it means to be alive at this point in history, has a more democratic process for deciding what news we all get. That is public-powered journalism.

So this is the awkward point in the post in which I say something like, “Full disclosure: I’ve been experimenting with these ideas as a journalist / member of the public for years, and developing a tool set to support this new story type. And hey — it happens to be something someone can actually buy and use.”

It’s called Hearken, and I wrote about our company’s values and ideas via how we rebranded (from Curious Nation) in this post. Hearken grew out of a news experiment I founded and executive produced at WBEZ called Curious City. It’s a simple idea: the stories newsrooms do come from the insights of individuals, not from Twitter trends or following the wave of getting traffic on what color that dress actually is.

Individuals get to ask questions about what they haven’t seen covered in the news. They get to weigh in on each other’s ideas and provide validation that a story would be worth dedicating resources on before reporting is done, and actually determine a subset of the stories newsrooms offer. And if newsrooms so choose, to actually invite the folks who ask the great questions that turn into stories along for the reporting (Love it when this happens; it’s user-testing for news products in the field).

Suddenly, everyday people are represented in the news without needing to have done something notably terrible or remarkably wonderful, or by being a bystander to something terrible or wonderful. Newsrooms get stories no other newsroom is doing, and stories that are directly relevant to their audiences. And members of the public get to share in the super power that reporters have long had: the ability to ask questions and get answers from just about anyone, including people in power.

Regardless of whether or not you work in the news, or are interested in buying what Hearken is selling, I hope to see more experiments allowing individual members of the public direct power in determining some of the news they get. I hope to see more processes and tools for better answering this fundamental question: How can journalists know the stories they report are stories their audience wants?

In this era of dashboards and data and endless trend reports, there’s still no substitute for simply just talking to people.

Jennifer Brandel (@JenniferBrandel) has been experimenting with journalism since the early aughts. She founded the popular WBEZ’s Curious City series in 2011 and is taking lessons pioneered on that project to other media organizations via Hearken. The bulk of her reporting experience has been for public media, having reported pieces for WBEZ, NPR, APM, PRI, and playing characters on the CBC’s WireTap and Radiotopia’s Love + Radio. Prior to radio, Jennifer started a women’s workout happening called Dance Dance Party Party, managed the 2010 Third Coast International Audio Festival Conference, and worked a variety of odd jobs. Her multimedia work has been published in The New York Times and Vice.