No Unions, No Problem: How Freelancers Are Fighting for Their Rights 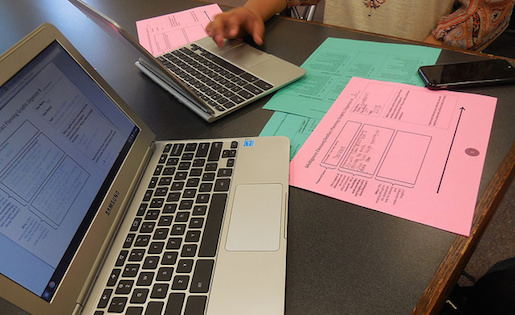 Photo by theunquietlibrarian on Flickr and used here with Creative Commons license.

“Brooklyn is like a goldmine. We can find so many people. Writers are actually very affordable in New York, which is very nice.”

That’s Sean Beckner, CEO of media company Viral Nova, in a New York Magazine piece about his wildly successful (and recently purchased) content farm. He’s responding to a question about how Viral Nova finds and pays writers — the company was worried it wouldn’t be able to properly staff the editorial team — but was “happily surprised at how little New York writers will work for.”

“A big problem is that freelance writers often think of themselves as artists or truth-tellers, which they are, but they’re also a business." -- Scott Carney

It’s a callous answer, but Beckner is right. Writers, in Brooklyn and elsewhere, often work for a pittance or, in the case of writing for big media brands, exposure. As the Internet has lowered the bar to entry for professional writing, and media companies feel the squeeze of shrunken profits, rates have hollowed out for all but the elite tier of professional writers.

Photo by niclas and used here with Creative Commons license.

Of course, writers are also finding more opportunities than ever: Blogs, content mills, media companies, and even brands are producing a deluge of content, and they need writers. Not all freelancers are struggling, but many serious problems still remain.

Stagnant rates are just one of the many frustrations currently facing the growing freelance community. The current tax system punishes the self-employed — which some classify as double taxing. The lack of benefits can lead to exorbitant out-of-pocket costs. And exploitative contracts, which sometimes remove lucrative revenue opportunities such as book and film rights, have also been a longstanding problem.

Then there’s the issue of just getting paid at all.

“Forty-four percent of our members reported issues getting paid in the previous year,” said Sara Horowitz, Freelancers Union founder and labor lawyer. “On average, our members are owed over $10,000 in unpaid invoices and spend 36 hours tracking down each missing payment. This is completely unacceptable.”

(Freelancers Union is not technically a union and serves the freelance community as a whole, not just creatives.)

Part of the problem is that freelancers, unlike the many editorial staffs currently unionizing, are legally classified as independent contractors, and therefore can’t unionize under the 1935 National Labor Relations Act.

While some freelancers have built successful careers despite these challenges, these significant problems only seem to be getting worse. But now, some freelancers are starting to fight back.

“Some media companies only pay $250 for a reported article that may take you months because they can offer exposure,” he said. “The problem is that you can’t eat exposure.”

Carney has been an investigative journalist for over a decade, is an author of two books, has been published in such publications as Wired, Mother Jones and Fast Company, and is a senior fellow at the Schuster Institute for Investigative Journalism.

Recently, his biggest focus has been two projects: WordRates and PitchLab, which he funded through Kickstarter. The projects are meant to tackle two of the biggest problems he sees in freelance writing: stagnant rates and exploitative contracts.

WordRates, which he characterizes as Yelp for freelancers, is meant to hold editors and publications more accountable for the way they operate. Freelancers can submit how much a certain publication pays, similar to other rates databases, but WordRates goes much further, letting them leave reviews and ratings of specific editors, compare contracts and find contact information (something that is often hidden by editors).

Like Yelp, WordRates carries with it the potential for abuse — it’s easy to imagine vindictive writers trying to sabotage an editor’s reputation — but for the most part, Carney sees the project empowering freelancer writers who are often left to navigate byzantine methods of working with publishers.

“There’s a bunch of secret handshakes, and a bunch of unwritten rules, in terms of preferences that you’re not supposed to violate,” said Clayton Purdom, editorial director at video game culture magazine Kill Screen and a longtime freelancer for publications such as Pitchfork and The A.V. Club.

But Carney doesn’t just blame editors and publications for these issues. He also lays some of the fault at the feet of freelancers themselves. “A big problem is that freelance writers often think of themselves as artists or truth-tellers, which they are, but they’re also a business,” he said.

This idea of freelancing as a business venture, rather than a passion that also pays, underlies Carney’s other project: PitchLab. The idea derives much of its structure from the literary agency model — mentors are paid by commission to help writers develop their pitches, shop them around to different publications and negotiate better rates and contract rights.

“That idea of negotiating and using publishers against each other is something I have no problem with, and other writers need to feel more comfortable doing,” Carney said. “That’s something the paparazzi does. If they snap a picture of Brad Pitt cheating on Angelina Jolie, they’re not going to sell it to the first publisher that says yes, because that’s not the value of that piece.”

Carney realizes that the agency model comes with its own issues, but he still believes it’s a better alternative to the relatively informal one in place now.

“The book-publishing industry, which is still somewhat exploitative, has a better system in place for writers,” he said. “Agents play interested publishers off one another for better rates, while also taking care of more of the business side of things.”

Neither project has been officially released yet — the funding on Kickstarter concluded in May — but Carney reports that progress has been “fantastic.” Ultimately, he wants freelancers to get “the right value for their work.” When the projects eventually launch around Labor Day, we’ll begin to see just how powerful accountability and agents can really be.

Shared workspaces have been in vogue as of late, but Kyle Chayka hasn’t been impressed with how they accommodate writers.

“They all have this heavily, heavily corporate vibe,” he said. “There are these glass wall offices and very stiff, cookie-cutter desks. You definitely feel like you’re in a company. And in some, there’s a stigma against taking phone calls in a main area.”

Chayka — a prolific full-time freelancer who has been published in the New Yorker, the Awl, and Al Jazeera — thinks freelance writers deserve a space better suited to their craft. He, along with freelancers Peter Moskowitz and Alana Massey, are currently organizing a kind of artist’s collective meant specifically for freelance writers, journalists and researchers, complete with a writer-oriented shared space and on-demand business support.

As Chayka says in the Medium post announcing the venture, the team is “devoted to showing that freelancing can be a long-term career choice in the era of online media.”

The project originated organically from his dissatisfaction with other shared working spaces, as well as his longing for the kind of shared creative drive often seen at editorial offices.

“Looking around, being on Twitter all day and hearing and seeing all the people in their offices interacting with each other… I often miss that camaraderie as a freelancer,” he said. “But I don’t think we’re not unable to replicate it. We can have that community for ourselves just as easily. We can make it.”

He plans for the space to be “creative, motivating and comfortable” — and certainly there will be no ban on taking phone calls. Overall, the team hopes to foster a sense of camaraderie and shared purpose.

But their goals go beyond the social and spatial issues faced by freelancers — they also plan to offer business services similar to Carney’s PitchLab.

“I would really like to see it function as a kind of business umbrella that can help people operate their own businesses,” Chayka explained. “Whether we’re supporting people with accountants or health insurance or even something like a sales team that helps you refine your pitches and get in contact with your clients — I think all of those things are the most helpful things that we could provide to freelancers.”

So far, he’s received around 100 applications for membership, which is currently priced at $150 to $350 a month depending on needs and usage. Eventually, Chayka wants to lease as many coworking spaces as possible around New York so freelancers working in Queens, the Bronx or any borough can have easy access to a space that fits their needs.

Still, he’s quick to note that he sees the endeavor as a lifestyle project, not a growth-oriented business venture. “I think it can be self-supporting,” he said. “I think it’s something that if there is enough demand, we would probably try to get grant funding or have different business supporting us so that we could offer the space as cheaply and as widely as possible.”

At this point, the initial space is set to open this October, though where exactly that will be hasn’t been decided.

It’s worth noting that Chayka’s project has geographic limitations — freelancers who live outside New York won’t be able to join. But, like Carney’s project, a workspace built for freelancers by freelancers has the potential to disrupt longstanding notions about what life is like for the self-employed.

As the so-called “gig economy” continues to take hold across the United States, the challenge to organize collectively and fight for worker’s rights in the absence of unions will be a big one. Carney and Chayka may just be showing a way forward.

This piece originally appeared in Contently’s The Freelancer, and was produced in partnership with Fast Company. It was originally published, in a modified form, in Fast Company’s Future of Work section.

One response to “No Unions, No Problem: How Freelancers Are Fighting for Their Rights”