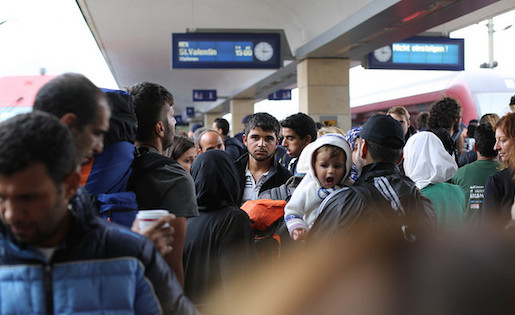 Stories of refugees moving en masse to Western Europe from Syria and other conflict-ridden countries have moved into digital rights territory, as access to communications networks has become vital for those navigating unfamiliar terrain on foot while facing increasing pressure from border authorities in Southern and Central Europe. Alongside mapping and GPS applications, messaging services and social networks are critical tools for people to communicate and strategize among themselves.

“I don’t ever want to pit humanitarian needs in a crisis against each other, because it’s not an either-or, but the communication needs are obviously very vital and need to be available at a moment’s notice.” -Kate Coyer

In Hungary, Serbia and Germany, local volunteers have responded by providing refugees with mobile phones, phone credit and WiFi access by whatever means necessary. Kate Coyer, a professor of communications studies at Central European University in Budapest, has worked with colleagues and friends to bring portable WiFi hotspots to crowded areas, along with power strips and backup batteries for mobile phones. In an interview with New Scientist, Coyer said, “I don’t ever want to pit humanitarian needs in a crisis against each other, because it’s not an either-or, but the communication needs are obviously very vital and need to be available at a moment’s notice.”

Online discussions about the mass influx of people into Western Europe have turned hateful in some social media circles, with multiple local German politicians receiving threats of violence and even death in response to their work to help welcome newcomers to their communities. German MP Ozcan Mutlu, who is of Turkish origin, reported that he received a message telling him, “It’s time to get Auschwitz, Buchenwald, etc. working again — that’s where you filthy Turks belong!”

Similar tensions are playing out on Facebook, and have provoked criticism from users and political leaders who say the company is not doing enough to curb or respond to hate speech targeting refugees. The company this week announced plans to work with the German government to limit hate speech and xenophobia on their networks, after German Justice Minister Heiko Maas spoke about the matter directly with Facebook executives. Maas announced a task force including Facebook, the Ministry of Justice, Internet service providers and other social networks that will aim to identify hateful content and remove it more quickly from the platform.

Ecuadorian media freedom group Fundamedios is facing closure over allegations that it has become politically partisan. Ecuador’s Communications Secretariat has begun proceedings to shut down the NGO, giving the group ten days to defend itself before a final ruling. Ecuadorian President Rafael Correa has been engaged in a battle with media critics over the past several years, and in 2013 passed a restrictive Communications Law deemed by many to be the most draconian in the region. “Not content with persecuting, harassing, fining and verbally abusing critics in the privately owned press, the Ecuadorian government is now threatening to dissolve the leading press freedom organization,” said the Committee to Protect Journalists’ Carlos Lauria in response to the news.

Iranian Facebook user gets seven years in jail, but no due process

Iranian Facebook activist Shahsavandi Shirazi was among eight Facebook activists arrested in 2013. In 2014, Shirazi was convicted of insulting the Supreme Leader Khamenei and late founder of the Islamic Republic Ayatollah Khomeini, conspiring against the state, and publishing pornographic images. Last week Shirazi told the International Campaign for Human Rights in Iran that, in judicial proceedings, she was denied access to a lawyer, interrogated about private matters and charged with crimes she never committed. Shirazi says the pages she managed on the social networking site were non-political and closer in nature to citizen journalism.

Veteran journalist Pravit Rojanapruk was detained by the Thai army for allegedly posting information online that “disturbed peace and order.” This is the second time Pravit, a senior reporter for the leading English-language daily The Nation, has been detained by authorities in Thailand.

In mid-October the Austrian parliament will vote on the controversial “Staatsschutzgesetz,” or State Protection Act, which would establish ten new surveillance agencies (one federal, nine provincial) and grant them far-reaching powers to monitor citizens with little judicial oversight. The law dictates that all data collected through the program must be kept for a minimum of five years in a central database. The law also explicitly encourages cooperation with foreign intelligence agencies. The legislation was drafted following terrorist attacks in Paris and Copenhagen earlier this year, and is attracting vehement criticism from many Austrian institutions, as well as the public. An online petition against the Staatsschutzgesetz, organized by Austrian privacy group AK Vorrat, has already garnered over 12,000 signatures.

Libraries have long been ardent supporters of free access to information and privacy, and have at times stood to defend their patrons’ rights to protecting the privacy of their reading habits. That battle took on new form recently, when a library in the U.S. state of New Hampshire, the first in the world to participate in the anonymous web browsing network Tor and allow patrons to use the networks via its relay technology, were contacted by the Department of Homeland Security through their local police department. Following a meeting between local police and city officials, the library consulted its board of trustees on the matter. The library trustees agreed to reinstate its participation with Tor.

The Internet Engineering Task Force and Internet Assigned Numbers Authority granted .onion websites “Special Use Domain” status, enabling administrators for sites on Tor Hidden Services to apply for SSL and TLS certificates. The move should result in a substantial improvement in the security of .onion websites.

The Washington Post released a new video series, “Global Threats to a Free Press,” which includes video testimony from thirty journalists, bloggers, photographers and activists worldwide who have faced direct threats because of their work. Global Voices authors Endalk Chala (Ethiopia) and Ali Abdulemam (Bahrain) are among those featured.