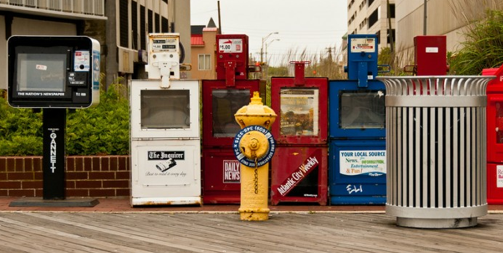 One of the main goals of our News Voices: New Jersey project is to elevate the role of communities at their local media outlets. To that end, we asked our Garden State members to tell us how they consume news, what issues they care about, and how well they feel local media reflect their communities. More than 300 people responded — and their answers were informative.

Over half of the respondents said their communities don’t get enough local coverage. This result reflects what previous research has revealed: In a state with 565 municipalities, there simply isn’t enough local, regional and statewide news coverage of New Jersey communities.

"It backs up what we’ve been hearing from both newsrooms and residents across the state: We need to collaborate to strengthen local journalism and bring more perspectives into the news."

Newsrooms in the Garden State have seen dramatic staffing cuts in recent years, a fact our members noted. Meanwhile, half of all survey respondents said that the New York City–Philadelphia broadcast stations that dominate the airwaves in New Jersey also overlook their communities.

Runaway media consolidation has had a dramatic impact in New Jersey, said a survey respondent from Rumson. “The past two decades have seen local newspapers bought out and either eventually closed down, absorbed or just hanging on with little local coverage,” he said. “The loss of local news has a great effect on community well being.”

A quarter of respondents feel that local media outlets present an inaccurate view of their communities. “I’m a person of color,” said a respondent from Asbury Park, “and the media only talks about my community when some crime takes place, but [ignores] the day-to-day events and struggles of the people.”

A respondent from Jersey City echoed this sentiment. “The crime rate in my area is high, and that fact always overshadows all of the good parts about my community.”

A Sample of Survey Responses

“New York City and/or Philadelphia-based news [outlets] seem to mostly tell stories of everything that’s wrong with New Jersey and very little of what we’re doing right,” said a respondent from Mendham. “There are over 8.9 million people living in the Garden State and yet ‘the news’ is only focused on Chris Christie.”

“It’s difficult to make decisions about the local government,” a respondent from Milltown said, “when there’s little to no information about the candidates.”

“As with most states,” said a respondent from Westfield, “the New Jersey statehouse corps has been significantly reduced and all reporters are overworked, lacking resources for investigative journalism.”

A respondent from Sparta captured what so many people across the state feel: “Our community is ignored.”

Indeed, the most dramatic survey result is this one: A resounding 84 percent of respondents said they want the media to cover local issues. This response is in sync with national data from the Pew Research Center, which recently found that nearly 9 out of 10 residents follow local news and say it plays an important role in their lives (admittedly, our survey was far less scientifically rigorous than Pew’s*).

Topics covered by the Pew Research Center study, conducted in association with the John S. and James L. Knight Foundation.

The amazing responses from our members reinforce News Voices’ plans to bring communities into the debate on the future of journalism. It backs up what we’ve been hearing from both newsrooms and residents across the state: We need to collaborate to strengthen local journalism and bring more perspectives into the news.

We hope to create a network of newsrooms and residents in New Jersey to benefit both groups. We aim to build the capacity of journalists who are being asked to do more with less, and we hope to encourage those same journalists to better represent and respond to the needs of local audiences.

Scroll through the data below for our complete survey results. And to get involved in the News Voices: New Jersey project, email me at [email protected].

On a scale from 1 (awful) to 5 (excellent), how would you rate your local news outlets?

Which subjects do you wish local news outlets would do a better job of covering? (Check all that apply.)

Where can you find news and information about your community? (Check all that apply.)

Website run by a newspaper, radio station or TV station: 42%

Black, Spanish-language or other ethnic media: 2%

I can’t find news and information about my community: 11%

How well does local media coverage reflect your community? (Check all that apply.)

Local media outlets provide an accurate view of my community: 20%

Local media outlets provide an inaccurate view of my community: 25%

*Free Press invited our members and others who live in New Jersey to take this survey so we could get a better sense of their perspectives on local media. We promoted the survey through email outreach and social media, making the link available to anyone who wanted to take part. Our goal was member engagement rather than social science research, and the results should be viewed with that in mind.