A Student’s Perspective on Online Learning at Syracuse 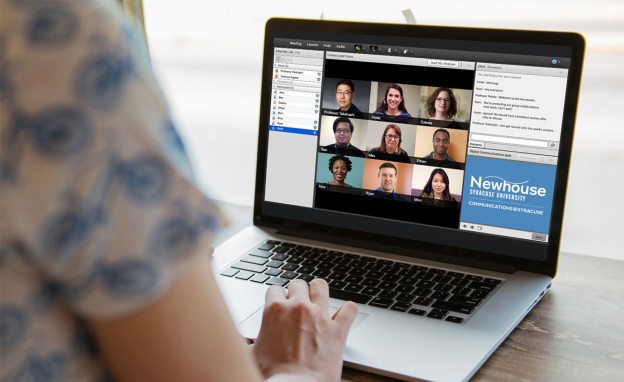 Today, I had a Twitter exchange with a few classmates as to whether the word “Internet” should be capitalized. Our professor chimed in by tweeting about the difference between “internet” and “Internet.” This casual exchange represents a breakthrough.

"By the end of our 15-minute small group session, we were chatting comfortably. Blog posts began to appear...and our hashtag became even more active." - Robert Bierman

We’re classmates in the online [email protected] master’s degree program offered by the S.I. Newhouse School of Public Communications, and a few weeks in we’re already comfortable enough to shoot the breeze via the class hashtag #DigCommSU.

Let me tell you how it’s been so far.

Getting the Class Format and Technology Platform

Syracuse professors teach our classes via a platform developed by 2U. In addition to offline textbook readings, our assignments each week are hosted on this platform. As it turns out, the technology is the easy part of our experience as students. It’s fascinating to see the robust way the professors can structure class using the tools available to them.

In the time between live classes, assignments include about an hour of video lectures, broken into segments, some of which include an essay question, which can then become a discussion thread in which both the class and the professor participate.

An online task list tracks the week’s action items. This is helpful for people like me who grab an hour when possible throughout the work week to complete our assignments. Weekly quizzes are hosted online.

Our projects are serious and on public display. For Intro to Digital Communications, each student created a WordPress blog for weekly reflection writings, and we tweet to the #DigCommSU hashtag. For Multimedia Storytelling, we post our projects to YouTube.

Each live class convenes for 115 minutes per week. Essentially, it is a 15-person videoconference that also includes a chat function (with an “’Everyone” chat and one-to-one chat capabilities). The professor can break us into smaller discussion groups, which we did in last week’s class, then reconvened as a whole class to compare notes. In next week’s class, my classmates and I will, for the first time, take on the role of presenter as we each share a PowerPoint analysis of a social platform.

If you are getting the idea that these are rigorous courses, you are correct.

In my first week, I was amused (and distressed) to discover I have gotten so accustomed to taking silly online quizzes, that I tried to wing it on my online academic quizzes. Big mistake! Now I finish all the assignments before clicking “attempt quiz.”

Getting to Know Each Other

An important part of school is developing relationships with classmates and instructors. In an age of social media, that would seem easy. I’ve discovered, however, that the “first day of school jitters” are the same with online education as they are with in-person classes.
Despite warm-up sessions preceding our first class, a meet-and-greet online with Dean Lorraine Branham and other opportunities to get comfortable with the online format, it took a while to develop the bravery to speak up. It went something like this:

Week 1: As part of our asynchronous assignment, we were required to answer an essay question, then comment on a classmate’s answer. Everyone answered the question. Then we waited. Who was going to comment on someone else’s answer first? Someone finally did, then another, then another. It became a lively discussion by class time. During our live class, we listened intently to our professor. I tried not to look at it, but I could feel the red icon that indicated the class was being recorded mocking me. The chat box was active, but few of us spoke up via our web cams. After class, we played another waiting game. Who would post their inaugural blog entry first? A few days later, at the urging of our professor, the posts began to appear.

Week 2: Activity on our class hashtag picked up — mostly posting of articles, but no discussion. The discussion questions on the asynchronous assignment were answered quickly, and the fear of participating seemed to dissipate. In class, the chat box died down a bit compared to the previous week as we participated more on camera. It was starting to feel comfortable. Then we broke into smaller groups. I suddenly found myself staring at four classmates, none of us knowing who was supposed to speak first or whether one of us was to lead the discussion. After some awkward chit chat, we began answering three questions posed to us by our professor on the digital notepad. By the end of our 15-minute small group session, we were chatting comfortably. Blog posts began to appear within a few hours of class, and our hashtag became even more active.

That brings us to today’s casual exchange on Twitter. My classmates feel like classmates. We are not only studying digital communications at the post-baccalaureate level using the latest digital tools, but we’re also getting to know each other as people.

I suspect when we meet in person for the first time at our on-campus immersion in November, we will have forgotten that we met on a digital campus.