Should a Student Newspaper Use a Rainbow Icon After Gay Marriage Ruling? 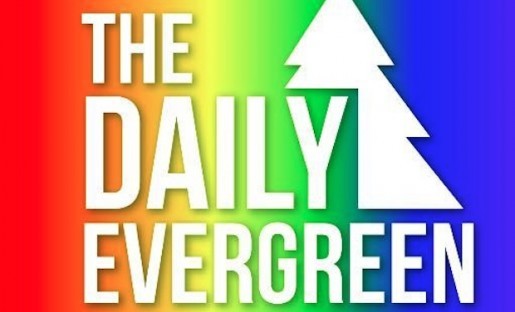 In the immediate aftermath of last month’s Supreme Court decision legalizing gay marriage nationwide, The Daily Evergreen editors at Washington State University placed a rainbow filter version of the paper’s logo as its Twitter profile pic. At least one conservative news outlet was dismayed by this decision.

As The College Fix tweeted in response to the rainbow-ized Evergreen image, “A college paper forfeits any semblance of objectivity with a rainbow icon. … You do realize that members of your community who disagree with today’s ruling may no longer trust your reporting?”

"The reason we changed the icon to show support had everything to do with being mindful of our readership..." Hannah Street

The Evergreen team’s tweeted comeback: “Oh no, you caught us! Yes, as the student voice of WSU we proudly support rights for all our students. How dare we.”

A college paper forfeits any semblance of objectivity with a rainbow icon. Following @BuzzFeed? #collegemedia https://t.co/JY05l9c0V4

Oh no, you caught us! Yes, as the student voice of WSU we proudly support rights for all our students. How dare we. https://t.co/IXIdUaVB9q

@DailyEvergreen You do realize that members of your community who disagree with today's ruling may no longer trust your reporting? #ethics

The debate, on its merits, is interesting — spotlighting questions of journalism versus activism, objectivity versus editorializing and the proper methods and spots to take principleds stand.

Below, Daily Evergreen managing editor Hannah Street and The College Fix associate editor Greg Piper were kind enough to weigh in with their takes on the DE’s rainbow filter decision. At the close of the post, I also offer my own perspectives.

“The reason we changed the icon to show support had everything to do with being mindful of our readership, especially since The Daily Evergreen champions itself by its slogan as ‘The Student Voice of Washington State University Since 1895.’ [On the day of the SCOTUS ruling] we were mindful that a large portion of our student body was celebrating a positive change in their life, a change that means access to rights. Although we represent all the voices of our student campus, including the ones that don’t agree with the SCOTUS ruling, yesterday was not about them. We would have been remiss not to take the opportunity to support our LGBTQ population. …

“The paper’s stance of supporting equal rights for our students does not impact the objectivity of our news reporting. That’s the short of it. I do understand the concern [of possibly alienating readers who disagree with the SCOTUS ruling], but I hardly think a newspaper’s job is to pander to meet each and every sensibility’s notion of the truth. In regards to the source of this debate, I don’t appreciate accusations of subjective reporting from an organization that flaunts its bias in its slogan [The College Fix slogan: “Your Daily Dose of RIGHT-Minded News and Commentary from Across the Nation”] and benefits from blatantly conservative backing. If there was a legitimate concern for a fellow news organization’s reputation of objectivity from College Fix, I missed it.

“Also, I do not, as a journalist, understand the idea that objectivity in reporting is some kind of weak facade, or ‘semblance’ that is easily shattered. News reporting, by practice, is rooted in verified facts. It is for us, anyways. But this was not a news report. We didn’t write a news brief in rainbow-colored font. This was a showing of support for our students, and holds no bearing on our reputation of excellent objective news reporting. Our readers understand that.”

“Dylan Byers at Politico noticed it first with BuzzFeed’s Twitter icon. [See one Byers tweet below.] I thought it was an isolated incident among mainstream media until I saw the Daily Evergreen used the rainbow background too. I’ve praised the Daily before, but I consider it completely inappropriate for a straight (no pun intended) newspaper — not its editorial board, but the paper institutionally — to take a side on a contentious political issue. I’d be miffed even if they put a vaccination needle as their icon to snub the anti-vaccine crowd.

This is not something news organizations do, is it? pic.twitter.com/oAtZxxmK5u

“It’s not The New Republic or The Stranger or even The Daily Show, but the paper of record for Wazoo, and not even independent from the school — which means it may have needlessly provoked conservative state lawmakers to question whether the taxpayer-funded Office of Student Media is teaching its journalism students the ethics they’ll need in a professional newsroom. Pointless provocation at a time when student media are under regular attack from trigger-happy administrators for really important news coverage.

“As a native Northwesterner and longtime Seattleite, I also know a bit about eastern Washington — where I have bright-red relatives — and its political climate. Even if the population were as liberal as Seattle, I’d think this was an unethical move. But happening in Pullman, it’s a finger in the eye to the surrounding community, who now have even less reason to think they’re getting the straight dope (again, no pun intended) from the paper, at least on any issue with a socially liberal position.”

Visible Nod to Big News of the Day

I’m a regular reader and fan of both the Daily Evergreen and College Fix, so in this case my two cents center strictly on the merits and not the media involved. All things considered, I personally support the Daily Evergreen’s rainbow filtering in this instance.

The temporary use of the image as the paper’s main Twitter pic was a small but visible nod to big news of the day — and the gigantic spin-off Facebook filter fad the SCOTUS ruling spawned. It didn’t strike me as a co-opting or cheapening of others’ struggles, as some have argued. It also didn’t come across as extreme or even out of touch with the majority. Instead, it’s a sign of support for a legal right more than 60 percent of Americans agree with — a number that is probably even higher among college students and residents of Washington state, where gay marriage was already legal. (Although as Piper mentions that support may not extend with the same fervor to the part of the state where WSU is based.)

In addition, the Daily Evergreen’s rainbow filtering recognizes the old walls separating subjectivity and straight news are crumbling or nonexistent in young news reader’s eyes. And it is an effort to reach the outlet’s audience where it most treads — the social media arena.

I mean, seriously, in respect to the latter, we’re talking about Twitter. It’s not sacrosanct. It’s simply a tool for sharing the news, taking stands and engaging with readers and the wider web. In that respect, the Daily Evergreen isn’t saying you have to support gay marriage legalization. It’s just implying its editorial board does, and let’s talk about it if you’d like.

So, everyone has won. The Daily Evergreen took a stand of sorts, Piper weighed in and a worthwhile wider discussion is being held.

My only hope is that the discussion remains impassioned and reaches greater depth and breadth — in part through news reports, feature stories and commentaries that do not have 140-character limits.

One response to “Should a Student Newspaper Use a Rainbow Icon After Gay Marriage Ruling?”