Inside the Empathy Machine: VR, Neuroscience, Race and Journalism 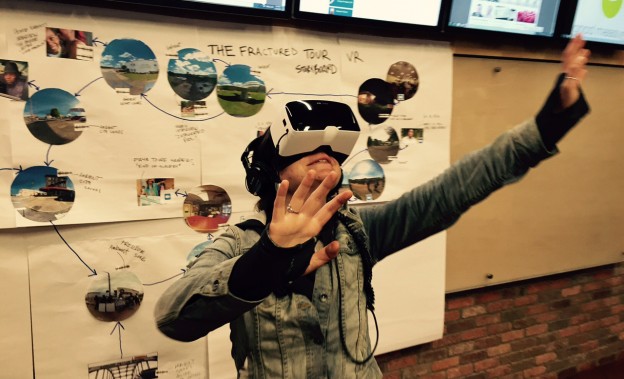 Ashley Rogers sat in a swivel chair, wearing a Zeiss VR One headset and over-the-ear headphones. As events in a world unseen to the rest of us unfolded, she fidgeted, looked around, flinched and screamed, and reached out for the safety of invisible handholds, and then reflexively held her arms up in a defensive posture. She was experiencing Sisters, a VR ghost story mobile app. The remarkable aspect of her behavior (besides the fact that she was a non-enrolled student who just showed up one day after hearing we were experimenting with augmented and virtual reality)  was the sheer physicality of her reactions and her sense of embodiment in a virtual world.

"Weary of perpetually mounting the 'shiny object' defense, I want to note up front that I am not using technology for technology’s sake."

Virtual Reality immerses the viewer in a story environment from an embodied perspective. Although the current market is driven by entertainment and gaming, early practitioners such as USC’s Nonny de la Pena and filmmaker Chris Milk of VRSE are exploring journalistic and documentary applications, and are discovering that the storytelling power of VR may lie in its potential as a tool of empathy. Our experiment in VR explores its use in reporting on race and social justice — subjects that are rife with tension and divisiveness.

Weary of perpetually mounting the “shiny object” defense, I want to note up front that I am not using technology for technology’s sake. My social documentary work has always looked to new technologies to push conversations in new directions, and this tour is its own kind of social documentary. We use “tour” in part as a reference to VR’s initial commercial applications of 360° panoramic tours, and also as a nod to fellow journalist’s David Leonard’s location-based experiment Fatal Tour, which asks the user to embody narrative in an unexpected way. For this experiment, we used simple off-the-shelf available software, hardware and improvised narrative possibilities to explore a tour of divides in one community in the VR app “Fractured Tour.”

The Fractured Tour app opens on a 360° panorama of local Selma activists at the Edmund Pettus Bridge protesting the reenactment of the Confederate Battle of Selma. Photo by Joel Beeson

The Science of Empathy and Race

Neuroscientists have been exploring the use of VR in terms of empathy and embodiment in light of new understandings of what is called the mirror neuron system. These brain cells trigger when a primate carries out an action but also activate when it watches another primate doing the same act, making a virtual simulation in the brain – an essential skill for social interaction and learning. Some neuroscientists believe this process gives virtual reality its power to create empathy and to build connections across divides of race, gender, age and class.

These divides exist whether an individual is consciously aware or not. Italian researchers learned that race was a significant factor in disparities in how people feel other’s pain, with “Caucasians reacting more dramatically to white people’s pain than African people.” Another study confirmed this and found that racial bias existed in people’s a priori perception of other’s pain, with both white and black Americans – including health care workers – assuming that black people feel less pain that whites. Recent research by British and Spanish scientists found that virtual “body swapping” reduces bias and heightens empathy for “out groups.” In this study, when white people virtually experienced the “owning” of a black body part or whole body, negative biases against black people diminished.

Mirrored Neurons, “Mimicry” and the Troubled Terrain of Racial Empathy

Everything about these conversations – and the science itself – is wrought with the tensions, anxieties and realities of our current toxic cultural and linguistic world. While the potential for creating empathy in these experiments is intriguing, even scientists’ use of the term “mimicry” and “owning” of a black face or body reopens wounds of black and white discourse, and the distress over colonization of black bodies, the legacy of blackface minstrelsy and many forms of pop culture appropriation. One of the researchers, Manos Tsakiris, references John Howard Griffin’s book, “Black Like Me,” which was recently resurrected in response to Rachel Dolezal’s masquerade as a woman of color.

Griffin, a Catholic journalist, was a white Texan who darkened his skin and traveled in the Jim Crow South in 1951 passing as a black man to experience firsthand the wounds of racism. Griffin’s greatest revelation was simply discovering the privileges of being white: “an important part of my daily life was spent searching for the basic things that all whites take for granted: a place to eat, or somewhere to find a drink of water, a rest room, somewhere to wash my hands.”

While “Black Like Me” has generally been respected as a journalism experiment, columnist Steve Rose, in his piece for the Guardian “From Ali G to Rachel Dolezal: The colourful history of blacking up,” aptly notes of Griffin’s book that “the African-American experience had already been fully and faithfully chronicled by actual African-Americans of the era, let’s not forget.”

These tensions were front and center as we reported and edited “Fractured Tour.” Though we are not discounting the potential for racial healing through “body-swapping” in Virtual Reality environments, we ultimately decided instead to explore embodiment through perspective and place-based immersion in our story journey.

The Past Hasn’t Gone Anywhere

This year Selma, Alabama, once again became “ground zero” for media attention 50 years after Dr. Martin Luther King led nonviolent marchers across the Edmund Pettus bridge into the face of police brutality, galvanizing the national will to strengthen voting rights in the South. Like most commemorative anniversaries, Selma’s landmark history was packaged by media industries and politicians for easy consumption, trivializing its most important ideas and lessons, and obscuring deeper and persistent injustices that continue to afflict our country. Back grounded in all the media hoopla around the President’s visit and the release of the Hollywood film, “Selma,” was the fact that 2015 marks the 150th anniversary of the end America’s deadliest war, and with it, the abolishment of slavery through the 13th Amendment to the U.S. Constitution.

In late April, two groups of students and faculty from journalism programs that – on the surface – have very little in common (Morgan State University, an urban, historically black institution and West Virginia University, a predominately white school in a rural state) traveled to Selma for a collaborative reporting project called Bridging Selma. At the behest of two deans — MSU’s School of Global Journalism and Communication’s DeWayne Wickham and West Virginia University’s Reed College of Media’s Maryanne Reed — we embarked upon an exploration of Selma’s racial and social trajectory as an experiment in social justice reporting.

Within hours of arriving in Selma, media coverage of yet another death of an unarmed African American man, Freddie Gray, at the hands of police provided a painful backdrop to our journey. The immersive experience in Selma also eerily foreshadowed the tragic events that would unfold in the following weeks with the massacre of nine men and women in Emanuel A.M.E. Church in Charleston, South Carolina. As we edited stories about the Confederate flag, white supremacy, and economic slavery, it was clear the ghosts of Selma’s fractured past had not gone anywhere and continue to haunt deeply our country and culture.

Disrupt The Story Form Itself

The project also revealed the inadequacy of journalism conventions in covering race, class and injustice. As Ferguson and the Baltimore riots unfolded, critique of journalism coverage became one of the main ingredients of the emerging narrative. The 24-hour cable news cycle and long-held conventions of daily journalism (notions of objectivity, binary coverage, “balanced” reporting or simply telling “both sides” of the story) have become practices that can also serve as shields for journalists, educators and students and that inhibit their ability to confront complex and divisive topics. These issues were unraveling volubly on the streets of Baltimore even as they quietly unfolded in Selma in our own reporting. As Morgan State University’s Wickham noted, “We knew this already – it’s why we are embarking on this experimental classroom – we want our students to be uncomfortable.” One way to disrupt journalistic practice – practices that inhibit new conversations – is to disrupt the story form itself.

Screen shot of unprocessed 360° video of the gospel group, The Angelic Harmonizers, at the Clinton Chapel Zion A.M.E. Church in Selma, Alabama. Video by Joel Beeson and Emily Pelland

Inside the Empathy Machine Part II

This article serves as an introduction to the cultural landscape that informed, and challenged, our approach to producing a VR social documentary piece on race and racism. It remains an experiment in process and can be experienced in 3D with a VR headset, such as Google Cardboard, Samsung VR Gear or Zeiss VR One, or can be viewed 2D on a mobile device.

We discovered that, for VR, we had to rethink every storytelling convention we’ve learned and how we go about working in the field as journalists. We have more questions than answers, but we’ve documented the process to candidly share our problem solving for other journalists and educators who are experimenting in VR. In  “Inside the Empathy Machine Part II: The Fractured Tour” we’ll take you behind the scenes and share the steps we took in the making of the app, from the cameras and software we used, field techniques, the mistakes we made, to the storyboarding and narrative decision-making process.

The learning potential (and steep curve) was illustrated when Emily Pelland – Morgan State University student who co-produced this project – commented, “What would I do differently next time? …Everything.”

One response to “Inside the Empathy Machine: VR, Neuroscience, Race and Journalism”