How a Mini-Hack Can Move Students Forward 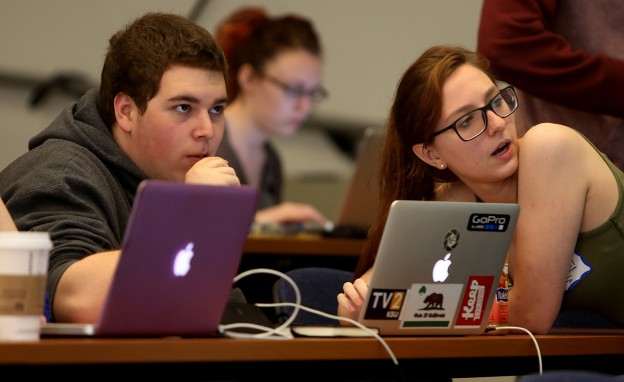 The idea to hold a hackathon at Kent State began with one sentence in a proposal for an AEJMC/Knight News Challenge Bridge Grant. I wanted to hold an environmentally themed hack, perhaps a smaller version of the international Ecohack World event, to inspire my journalism students to approach technology in a more “hands-on” way and bring a different mindset to their practice of journalism.

Some of them already used a few of PublicLab’s open-source, environmental testing tools in our class project documenting the Cuyahoga River. Could we develop or enhance some of our own tools and make them beneficial to journalists’ work? Was a hackathon the best way to give my students a jumpstart toward learning about programming?

The problem with hosting a full-scale hackathon was that I didn’t have the first clue about what it takes to pull one off. But I quickly found out.

Hackathons, at least the student-run ones, are weekend-long events where participants try to build working prototypes of their ideas and see how they might translate into the real world. The biggest ones run by students, like MHacks and PennApps, draw between 1,300 and 1,500 participants — PennApps plans to host 2,000 hackers this fall, which would make it the largest. Major League Hacking, which calls itself the “official student hacking league” on its website, listed 60 hacks scheduled for the spring 2015 season alone.

Hacks are one great way to introduce people to techniques for making practical things from the skills they’re learning in school, said Pranav Vishnu Ramabhadran, director of PennApps. “The idea is to take whatever you have available to you and come up with something completely novel.”

Engineers and mentors from sponsoring companies like Google, Facebook, Microsoft and Comcast attend and mentor students on how to use their software or products effectively.

At the end of what typically turns into a mostly sleepless weekend, judges pick the most innovative, high-impact and effective hacks and award prizes that range from money to software to free Internet access or hosting.

Some things to note about hackathons, whose participants come with high expectations:

Once I learned more about how hacks worked, I knew I couldn’t pull one off with the time, money and people I had available. Plus, when I excitedly talked to my journalism students about 36 straight hours of “tech-i-ness,” their eyes glazed over and they lost interest. They couldn’t see the relevance of the hack to the profession they are pursuing.

Turns out, first-time hackers often feel intimidated, even if they’re computer science majors. “People can get very discouraged at the start. We focus very hard on making sure no one gets left behind,“ Ramabhadran said.

For her first hack, Melanie Nesteruk, a photojournalism and digital sciences major at Kent State University, attended Space Apps 2015 in Cleveland at NASA’s Glenn Research Center. “I was nervous,” she said via email. “I knew there would be some amazingly talented programmers and engineers there. I kept thinking to myself ‘I’m not a programmer. I’m a photographer. What am I even doing here?'”

Planning a day of technology

So we changed our thinking and started planning what we called our “mini-hack,” an all-day tech workshop to introduce journalism students to some basic programming and web skills. That way, we hoped they would feel more prepared to attend the Kent Hack Enough event the following semester. We named it “TechConnect 2015” and started to spread the word.

Posters designed in Canva were put up across the Kent State campus to promote TechConnect 2015.

The first 100 people to register were guaranteed a pizza lunch and a free shirt — the T-shirts were paid for out of the promotions budget in my grant. The pizza was largely donated by local businesses, so our “out-of-pocket” costs were less than $100.

We started lining up speakers and presenters in the areas we wanted to cover. Since data and mapping are important technical skills for journalists, our sessions were weighted heavily toward those areas. For the lunch break, we invited a keynote speaker, Bill Zawiski, from the Ohio EPA, who helped take the workshop full circle for the journalists as he explained how data is collected in the field, then made available for public use.

In the end, we were able to include all but the last three for the day-long workshop. If we do this again next year, we’ll keep those topics on our list and network harder to find instructors.

All the sessions involving code were hands-on and used jsfiddle.net, a developer tool that creates a code writing and output environment with lots of features that help ensure you’re on the right track. We displayed jsfiddle on big display screens in our auditorium and explained each step in the coding exercise. Volunteer instructors also roamed the auditorium to help anyone who got stuck.

The D3 session, led by HacKSU student leaders Robin Bonatesta and Paul Dilyard, was probably the most challenging, since its use presumed the highest level of coding skill of all the sessions.

Two Skype sessions that demonstrated how to use Silk and CartoDB may have been the least successful, not because they’re not great tools, but because it was pretty much a one-way conversation and less hands-on for the audience. The students thought they were good tools to learn about; it was the presentation that could have been more effective.

Aurelia Moser, a map scientist with CartoDB, leads a webinar during TechConnect 2015, held at Kent State University in April. Photo by Susan Zake.

The WordPress session, which explained how to purchase your own domain name and hosting service and launch your own WordPress website to showcase work, seemed to resonate best with the least experienced students.

The planning committee comprised six people, including my graduate assistant, the marketing coordinator for KSU’s School of Journalism and Mass Communication, a HacKSU member who worked in JMC’s tech support, the director of JMC’s tech department and Nesteruk, the student hacker.

The session leaders were a combination of HacKSU students (HacKSU holds almost monthly training sessions for its members, so they have great experience in leading seminars), one Kent State IS staff programmer, two outside reps from Silk and CartoDB and one Kent State professor (me). All of us chipped in to help in the audience as our participants worked through the coding exercises. Everyone volunteered for the day.

Once we figured out what we were doing, we spent about 10 weeks planning TechConnect. Close to 60 people attended, mostly students. Considering we held it the week before finals, we felt attendance was pretty good and will only get better with future events.

To get feedback about the day, we circulated a questionnaire to the participants. Interestingly, only one of the journalism majors who responded ever attended a tech-oriented workshop before.

The results were generally positive. The hands-on demonstrations were the clear favorites and the most effective, but students also liked the tools they heard about through the CartoDB and Silk webinars — they just wished those sessions were live, as well.

Audrey Fletcher, a magazine journalism major who graduated from Kent State in May, said on the questionnaire she “liked learning about tools that are quick and easy to use but still look nice. For those of us who don’t know a ton of code, it makes more things possible for us.”

Jo Ellen Corrigan, a researcher and content producer for the Plain Dealer in Cleveland, listens to one of the webinars during TechConnect 2015 at Kent State. Photo by Susan Zake.

Attendees praised the “intimate culture” fostered by the workshop, as well. One attendee commented the “presenters were enthusiastic and patient” and loved how directly involved he was in the sessions.

Marcia Pledger, a business reporter for the Cleveland Plain Dealer, said she “really enjoyed learning about how technology intersects with the ability to make content better.”

Some of the things we’ll do better or differently next time, if we repeat the event:

The workshop, said Nikos Frazier, a photojournalism major at Kent State, “showed me what I can do and what I can improve on and look toward in the future. “