Women Are Grossly Underrepresented in Journalism. This Startup Mag Wants to Change That 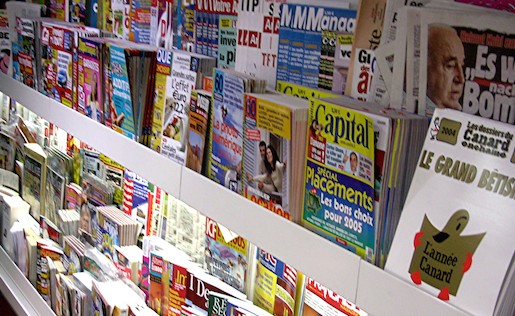 A 2014 study conducted by Vida, a research-driven organization that helps bring attention to women’s literature, found that female writers were shockingly underrepresented in general interest magazines. Last year, only 30 percent of articles in the New Yorker were written by women. The New Republic was even worse at 27 percent. And believe it or not, only 20 percent of bylines in the New York Review of Books were from women.

"The more time you spend in the industry, the more you see the way that men and women are treated differently. However, it has less to do with overt instances of discrimination and more to do with the issue of systemic biases coming into play." -- Jillian Goodman, editor at Fast Company and founder of Mary magazine.

Those troubling numbers will probably surprise you. The magazine industry is not the first field that comes to mind when we think of workplace gender inequality. But Jillian Goodman, an editor at Fast Company, has decided to take matters into her own hands. With the help of a cast of female writers and editors, Goodman is creating Mary, a general interest magazine that will only use female contributors and editors.

Goodman took to Kickstarter to raise $20,000 for the project. The campaign has already reached its funding goal, but will still be live for another week in case more people want to contribute.

I spoke to Goodman to find out more about what inspired her to build Mary, why women’s magazines need more investigative reporting, and the best piece of advice she has for all reporters.

How did you start your career in writing and editing?

I interned at and then was hired by New York Magazine as an online producer for their Vulture blog, and then I started as an editor at Fast Company in August of 2012.

What inspired you to create a publication made by women?

The more time you spend in the industry, the more you see the way that men and women are treated differently. However, it has less to do with overt instances of discrimination and more to do with the issue of systemic biases coming into play. The more time I’ve spent in the professional world and the older I’ve gotten, the more feminist I feel, and the more I find myself drawn to the things that women have to say.

Plus, the magazines that I like to read are primarily general interest magazines. You can get a wide variety of different types of stories and read different writing styles, but it’s discouraging when you see that the majority of the people writing those stories are male.

Of course, I don’t think male editors think that men are better writers than women. There aren’t overt biases. You just share a certain set of experiences with people who are like you in different ways. So when you’re a woman coming up against mostly male editors, you don’t have a ton of shared interests.

Would you call Mary a feminist publication?

Without a doubt it is a feminist project, in that it is interested in what women have to say. What I want to do with Mary is publish the same kinds of stories that you would find in the New Yorker. We want the same breadth of offerings. It’s just that all women are doing it.

Did you have any personal experiences in your career that led you to want to create Mary?

I’ve had the notion that I’ve wanted to create my own project for a long time. It’s fun and these are the parts of the job as an editor that I really like — working with writers and assembling the whole project.

In that same interview with Cosmo you mention that men’s magazines publish more investigative journalism than women’s publications. Why do you think that’s the case?

That’s kind of just the way that men’s magazines developed. A lot of these magazines have DNA that goes back to a time when men actually did think that women weren’t as smart and couldn’t handle investigative journalism. Of course, both men’s and women’s magazines have come a long way since then. Someone who works for Elle or Cosmo doesn’t feel hamstrung by that publication’s history. They don’t think that they need to write to the old idea of femininity. However, the way the publications developed, the models for men’s and women’s magazines are different.

Why do you think it’s important for women to write hard-hitting pieces? They could just as arguably be written by men, couldn’t they?

I want this to be a feminine project. Sure, there are a lot of male, feminist writers out there. But that’s just not what I’m interested in for this.

I attempted to fundraise privately first. I’m a very shy person, so the idea of making a project public before it was finished made me nervous. But building the project on Kickstarter was very helpful. It forced me to answer a lot of questions about Mary. It made it more real. I had to create a roster of writers so people could understand what the project was going to be. And the reception was wonderful when it went live.

I’m pleased with the number of donors and that we’re fully funded, but now I wish that we’d asked for more money. Paying people is really important to me, and I would like to pay my writers more. I hope people will continue to donate, so I can do more right by the fantastic writers who agreed to do this for me.

Is there going to be more than one edition of Mary?

I honestly don’t know. Right now I’m focusing on short timeframes. My mission is just to close out this Kickstarter.

What kind of advice would you give to women who want to write investigative journalism and in general?

The Mary website will go live soon. For now, maryreview.com will link you back to the magazine’s Kickstarter. Make sure to keep checking the page for updates.

The original version of this piece appeared on Contently. You can sign up for Contently’s newsletter here.

Jillian Richardson is a writer and humorist. She has written for The Content Strategist, The Freelancer, Shutterstock, The Maude, Styleite, BarkPost, and OpenView Venture Capital. You can reach her at [email protected] and see her writing portfolio at jillianrichardson.contently.com.