How Periscope Could Be Used for Context Delivery 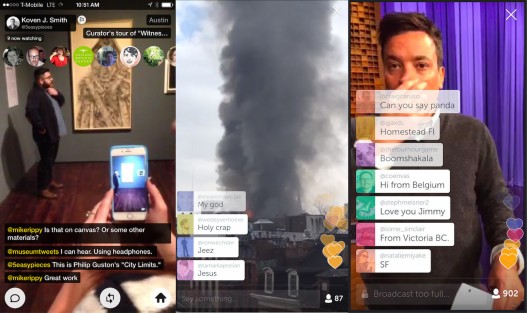 The app Periscope allows anyone with a smart phone to easily live stream video to followers. Photo from Storybench.

Since the latest wunderkind app Periscope, which allows anyone with a smartphone to easily live-stream video to followers, hit smartphones in March, media makers from YouTubers to talk-show hosts have been experimenting with how best to use it. They’ve taken us inside of people’s fridges, onto the soccer field, and into the thick of the recent Baltimore uprising:

"What’s unique about Periscope isn’t the 'what' of video and audio streaming, but the 'how' of instantaneous interactive content delivered to your mobile device."

The Washington Post recently experimented with Periscope when news designer Dan Worthington off-handedly used the app to live-stream his front page design of the newspaper’s sports section. Working on a deadline and answering questions from viewers as he drew, Worthington attracted over 9,000 viewers to his Periscope stream. This is exactly the kind of experimentation that journalists should be trying, says Matt Vita, sports editor for The Washington Post. Vita says he was happy to see Worthington experiment with the app, and the more experiments like this one could help draw back the curtain on what goes on in the newsroom.

“We forget as journalists how interested people are in how we go about doing what we do,” Vita told Storybench. “Long-term, I think it’s helpful as far as shining the light a little bit on the journalistic process at a time when people are very skeptical of the media and don’t often recognize the work, the care, the intelligence that goes behind it.” The Washington Post‘s PR team was pleased, too, and interviewed Worthington on his Periscope experiment.

But why Periscope? Why not other apps or media already at our disposal? What’s unique about Periscope isn’t the “what” of video and audio streaming, but the “how” of instantaneous interactive content delivered to your mobile device.

What presumably made Worthington’s sports design stream so intriguing for so many people was not just that they could watch him design the front page; it was that they could ask him questions and get answers immediately. It was a live “Ask Me Anything” with a journalist.

Journalists might see Periscope not as content delivery, but as context delivery. This potentially opens the door to a different format of breaking news reporting.

The one-on-one feel of a Periscope broadcast on your personal screen, inspired by its (currently) mobile-only transmission, allows news consumers to tag along with journalists out in the field. For Vita, that might mean taking five minutes to answer questions from the sidelines of spring training for college football. It could also enrich coverage for longer, press-heavy events. A reporter at South by Southwest, for example, might use Periscope for impromptu interviews throughout the conference. A journalist on the scene of a major protest can bring viewers with them.

Journalists are just beginning to explore the uses of Periscope. Vita says he has yet to have any serious conversations about how he or his department might use the app in the future. But that’s kind of the point. One of the best parts about Worthington’s experiment, says Vita, is that it wasn’t an order or objective that came from a department head or editor. It was spontaneous. He’d like to see more of that, from his paper and journalism in general.

“There needs to be an ethos or spirit of innovation and willingness to take risks and try things out and do things you’ve never done before in the media environment we’re in,” he says. “Be creative. Try stuff out. Don’t be afraid. That should be the biggest message that any newsroom should have today.”

Emily Hopkins (@genderpizza) is a journalist in Boston.

One response to “How Periscope Could Be Used for Context Delivery”