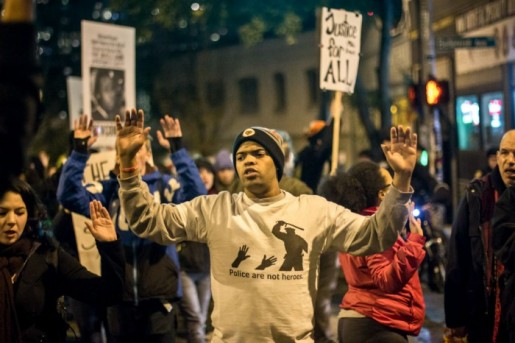 Protests at Westlake Park on November 24th, the day the grand jury handed down the decision not to indict Officer Darren Wilson for the shooting of Michael Brown. Photo by Jama Abdirahman.

Jama Abdirahman is a 22-year-old student at Seattle Central College. He loves photography and the Seahawks. His parents, who are from Somalia, hope he’ll become an engineer.

It’s unlikely that Jama would become a journalist. Journalism is dying, right? Plus, people of color made up just 13.34% of US newsrooms in 2014. That’s less than half the percentage racial and ethnic minorities make up of the US population overall.

The Seattle Globalist, a non-profit news organization of which I’m a co-founder and the executive director, wants to see that number change dramatically. Our own newsroom is the petri dish: our writers are 40% people of color and 20% foreign-born. Two of our three editors are women of color. Our board includes people who identify as a range of races, ethnicities, nationalities, and sexual identities.

People often ask me how we’ve built such a diverse organization, and I’ll get get to that in a moment. But what may be more interesting is why.

The why is surprisingly simple: we think the diversity of our writers makes for a better publication. Our mission is to elevate diverse voices through media, and we get there by creating opportunities for people who have often been underrepresented in the media – immigrants, people of color, young people, and many others – to produce interesting stories that people want to read.

We’re lucky to be here in Seattle: a fast-growing, hyperdiverse city with people from almost every country in the world. When we want to cover what’s happening in Ukraine and Russia, we look to our Ukrainian and Russian communities for fresh – and very different – perspectives. When we get a tip about international students turning to illegal work to help pay for tuition, we find an international student who can write about it. When Jama Abdirahman, a source in a story about increasing police presence targeting East African youth, tells us he wants to photograph the Black Lives Matter movement in Seattle, we help him publish a photo essay.

Citizen journalism has often been pitted against professional journalism – seen alternately as a shoddy stand-in for the top-quality journalism we could no longer afford, a powerful tool for direct democracy, or even heralded as the answer to the journalism crisis.

At the Globalist, we’re just opening the door. We’re giving everyday citizens access to the tools, skills, and editorial process that define professional journalism. They are getting mentorship from professionals – and in turn those pros are getting the best access to the community they could hope for. Perhaps all journalism is citizen journalism. We all have the same rights to access information. Pros just have more practice.

From Pros to First-Time Writers

We see this borne out in our work every day.

Many of our writers are pros: award-winning journalists who have written for local and national publications around the world. Editing their work is a breeze. They are familiar with where to go to find information. They know how to check their facts, record quotes, and write a nut graf.

And then many more of our writers are first-timers. They need guidance as they learn to interview, report, and write a news story: how do you turn your idea into a story? Who do you talk to? How do you convince them to talk to you? How can you pack all of this important information into a tiny little 600 word post that people will actually want to read? How do you get them to read it?

Our editors spend lots of time with these writers. They help identify sources, unbury ledes, and find photos. They push contributors to make that one last phone call, chase down that last bit of information, and check all of their facts. It’s not the most efficient way to put out a news publication, but it makes for fascinating stories.

And we’re seeing ripple effects in other Seattle media. Our writers have been picked up as guest commentators on local talk radio. Our stories have driven coverage of important issues affecting immigrant communities in Seattle: an end to money transfers from Washington state to Somalia; and ongoing reports of misconduct at the Northwest Detention Center. Right now, there are more stories out there than we can cover, and more people who want to write than we have time to edit.

All of this is why, with support from the INNovation Fund, we are launching a new series of workshops that will help develop journalism skills in our community. The trainings will help take some of the load of one-on-one mentoring off of our editors, and welcome new potential writers on board. We’ll charge a fee for the workshops, to help cover our costs, but we’ll also refund that fee as a bonus for anyone who goes on to successfully publish a story with us.

We want Seattle to be known for its media: media with a powerful, authentic voice representing our incredibly diverse city. We think these workshops and our model are getting us closer.

Last week, Jama Abdirahman, who has gone on to become a Globalist youth apprentice reporter, gave us some news that we think is pretty good for our field: he’s ditching the engineering idea to become a photojournalist. With our apologies to his mother, we couldn’t be prouder.

Jessica Partnow (@partnowjess) is executive director and a co-founder of The Seattle Globalist, a non-profit news organization dedicated to elevating diverse voices through media. She is an international radio journalist whose work has been broadcast by dozens of public radio stations, networks and programs. She has received two Edward R. Murrow Awards, regionally for her radio series Life on the Duwamish and nationally for Generation Putin, an hour-long public radio special on young people and political change in the former Soviet Union, as well as a Gracie Award for her reporting on humanitarian drug trafficking. Jessica is also an Artist-in-Residence at the University of Washington, where she teaches journalism.