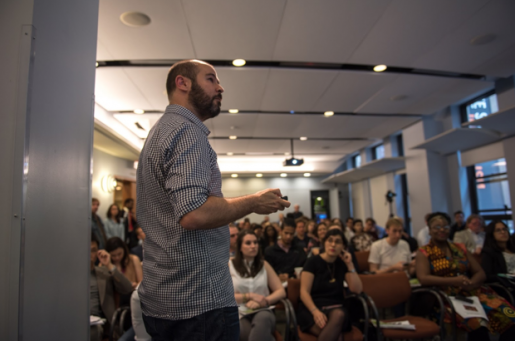 Here’s a sampling of their summaries:

"So what’s next for the startups? Many are already at work on the next phase of product development, building out their content and services."

When you watch the 20 fellows’ four-minute presentations from that night and read their elevator pitches, it’s evident that most aim to solve nagging, niche problems with solutions driven by a combination of original journalism and community input. Most are experimenting with multiple revenue streams—ads alone, particularly for small-scale projects, generally won’t suffice.

So who are these fellows? They’re high-potential, mid-career media professionals — as well as top recent grad-school graduates — selected from a pool of more than 100 global applicants for an intensive four months of training in entrepreneurial journalism.

Over 15 weeks between January and May, the fellows progressed from user interviews and paper sketches to prototypes, landing pages, and business models. Some had living projects-in-progress and worked on strengthening their products, expanding their audiences, and growing new revenue streams.

While developing their startups over the spring semester, the fellows spent more than 200 classroom hours sharpening their business and entrepreneurial skills and their understanding of the broader context for media innovation. They took classes in new revenue models for news and in business fundamentals—covering subjects like strategy, marketing, and finance, as well as “soft” biz skills like negotiation, leadership, and public speaking. Every Friday we visited innovation hotspots, including Twitter, Facebook, Google, IDEO, NYTimes, WSJ, Mashable, Kickstarter and Vice. For a behind-the-scenes sense of the semester-long journey they took, listen to these short podcast episodes produced over the past few months by fellow Kristen Clark.

To help in ramping up their startups, the fellows participated in expert-led skill workshops covering topics like social media marketing, crowdfunding, and project management. One fellow capitalized on a mid-term crowdfunding campaign to raise more than $26,000 for his project. Others earned grants during the term, including a $10,000 award from the Foreign Press Association and travel funding from the International Women’s Media Foundation.

The fellows learned a lot from each other about global media innovation—half of the group was international, representing eight countries: Belgium, Brazil, Colombia, Malaysia, New Zealand, Spain, the UK, and Zimbabwe. They were born in several different decades and had vastly varied backgrounds; one had studied electrical engineering at Yale, another had worked on Obama’s election campaign. A couple had worked mostly with print, others came from digital backgrounds; some had focused on audio, others on video. By the end of the program, the group bonded with the help of a communication cocktail consisting of intense doses of Slack, Whatsapp, and late-night working sessions in the CUNY J-School newsroom.

The fellows presented three times during Demo Week (see photos). First they pitched to a panel of experts, including startup founders, investors, and veteran journalists. Then they met one-on-one with invited students, entrepreneurs, journalists, and members of our Entrepreneurial Media Meetup group. Finally they presented to a standing-room only public crowd at the CUNY Graduate School of Journalism. By the time they wrapped up their final presentations, it was as if they’d been colleagues for years.

So what’s next for the startups? Many are already at work on the next phase of product development, building out their content and services. Others are taking stock of the feedback they received and making adjustments. If past groups are any predictor, at least a few of the startups will flourish, as have Narrative.ly, Skillcrush, Mandara Online, Clear Health Costs, Informerly, and other Tow-Knight alums. Some fellows will opt instead for newsroom positions, carrying with them a spirit of entrepreneurship. And as these fellows move on, I’ll be looking out for the next batch of fellows, for the term that begins in January of 2016. Got a startup idea? Let us know.

Jeremy Caplan (@jeremycaplan) is Director of Education for the Tow-Knight Center for Entrepreneurial Journalism and a former Time Magazine reporter.