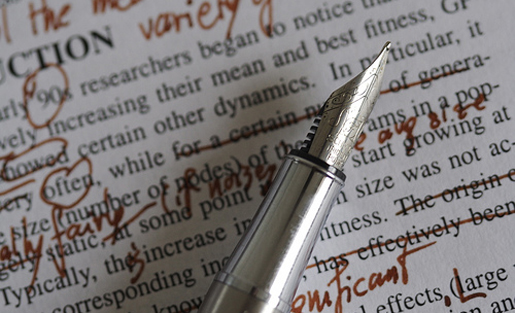 For awhile it probably seemed to some friends and family that Rebecca Faith Heyman had pursued an expensive degree at NYU without any intention of actually using it. She did her undergraduate and graduate degrees there, both in English, and while many of her classmates secured internships at the big publishers and magazines, Heyman spent her summers working service jobs in hotels and restaurants. “When I got out of school I wasn’t really sure what to do,” she told me recently. “I had started teaching yoga, which is not, as you can imagine, terribly lucrative.”

But despite forgoing the traditional publishing route, Heyman had always held an interest in book editing, and what with her advanced degrees in English she thought she could give it a try. So in 2007, right around the time of the Amazon Kindle’s debut, she signed up for a couple online freelance marketplaces, the kind where potential clients post jobs on which freelance editors bid. At first, many of the jobs she took on were for simple proofreading, but when she began offering tentative feedback on the editorial structure of a manuscript she was surprised to find a receptive audience.

"The importance of editing has really sunk in for every serious author, but they’re not really ready to put in the necessary money in to hire a new editor." -Ricardo Fayet

“I would say things like, ‘Hey, I noticed there’s this big continuity error, and you might want to go back and fix it,’” Heyman said. “I wasn’t really being paid to do that, I would just let them know.”

In the early days of Kindle self-publishing, many of the books were of the business variety — the how-to e-books that bloggers and consultants had already been offering as PDFs on their websites. Eventually, however, genre fiction writers began to wade into the fray, and these authors, many of whom had given up in frustration on penetrating the New York publishing scene, suddenly found themselves with fervent — and lucrative — readerships. And with this sudden demand came a rising need for the kind of editors who offered the feedback that could be found at traditional publishing houses — something for which Heyman discovered she had a talent.

“People really responded to the feedback and asked for more,” she said. “And I said, ‘Well gee, I guess my literary taste has value.’”

Over the next few years, from about 2007 to 2009, Heyman put herself through a crash course in freelancing — she learned how to be client-facing, price her services, and use her education and literature background to provide editorial suggestions.

This commitment to building out her freelancing career paid off as self-publishing swiftly crossed over into the mainstream. A recent analysis by Bowker of ISBNs, the identification numbers assigned to most books, found that the “ISBNs associated with self-published books climbed 437% between 2008 and 2013.” According to the Author Earnings Report, an analysis of the 120,000 bestselling e-books on Amazon that’s released quarterly by bestselling author Hugh Howey, “in mid-year 2014, indie-published authors as a cohort began taking home the lion’s share (40%) of all e-book author earnings generated on Amazon.com while authors published by all of the Big Five publishers combined slipped into second place at 35%.”

These days, Heyman has more client inquiries than she has time to take on, and during any given month she’s juggling between seven and 10 manuscripts. She’s not alone. While much has been written about the rise of self-publishing and the launch of overnight bestselling authors like E.L. James and Amanda Hocking, we’ve heard little about the growing cottage industry of freelance editors and designers that’s emerged to service these writers.

As the self-publishing scene has matured, many authors who previously handled all stages of publishing — from layout to cover design to editing — are now seeking out others to handle production so they can focus solely on writing. The publishing industry, essentially, is experiencing an unbundling, with some editors and designers even decamping from the “Big Five” New York publishers to pursue freelance careers.

How big is this growing market? Exact data is hard to come by, but a recent paper published in Learned Publishing found that up to 59 percent of self-published authors have at some point used an editor.

“There is evidence to suggest a growing awareness among self-publishing authors that professional editing is an essential component for increasing the chance that their work will sell,” the authors wrote.

According to Ricardo Fayet, the market for these freelancers has grown large enough that it’s attracted a surge of amateurs, many of whom began flooding online marketplaces and offering cheap, low quality services to unsuspecting authors. That’s why Fayet, along with three other co-founders, launched Reedsy, an online marketplace that vets freelance editors and designers prior to allowing them to advertise their services on the platform.

“We received over 3,000 applications — people who filled out profiles on Reedsy,” he told me. “And a lot of the worst ones, they sent us emails after their submissions saying, ‘Am I accepted on Reedsy, when can I find authors on Reedsy?’ Out of 3,000 applications, we’ve only selected 238.”

For several years there had been a gold rush of self-published authors who, spurred by newspaper articles on Kindle millionaires, flooded the market with low-quality, poorly-written books in the hope of overnight success. But recently that gold rush has calmed down, evidenced by the slowing rate of newly-registered ISBNs. For those authors who remain, said Fayet, there’s a growing recognition that in order to cut through the noise there needs to be more emphasis on producing a professional product, both in design and editorial standards.

He argued that this has led aspiring authors to slowly begin opening up their wallets to take their manuscripts to the next level. Mark Coker, founder of Smashwords, one of the largest distribution channels for e-books, wrote recently that “if you’re preparing a book launch and you have a couple thousand dollars burning a hole in your pocket that you want to spend on marketing, spend that money on professional editing instead.”

How much does it cost to have someone edit and design your book? According to Fayet, a “full developmental edit,” which covers everything from structural editing to copyediting and proofreading, costs between $2,000 and $4,000. A freelance designer will charge anywhere from $500 to $2,000 to design a cover. It pays well enough that “a lot of in-house designers are currently sorting out their NDAs with publishing companies to join Reedsy as freelance. The way they do business is they try to get as much traditional publishing jobs as possible because they pay more, and then do side jobs with self-publishing.”

From a publishing house to freelancing

In some cases, editors are leaving positions at New York publishers to dive into freelancing full-time (in fact, the Learned Publishing paper estimates that 67 percent of freelance editors began their careers in traditional publishing). That was the case for Kiele Raymond, who left her job at a Simon and Schuster imprint a little over a year ago. Through a family connection, Raymond had secured an internship in Simon and Schuster’s marketing department and, after abandoning her initial plan of pursuing a PhD, reached out to her boss there who offered a position in the editorial department. From there, she followed the traditional publishing track, working as an apprentice with two senior editors at an imprint called Touchstone Books before getting a promotion to another imprint, Gallery Books, where she managed her own list of authors.

To anyone aspiring to a career in publishing, Raymond’s trajectory would have been enviable.

“I’d been living in the city for three years and was kind of at the point where I could have kept going in the traditional track,” she told me. “But then I stepped back and looked at my personal priorities and what I wanted as a lifestyle and decided I wanted to leave New York City.”

She and her boyfriend, who also worked at Simon and Schuster, moved up to coastal New Hampshire.

Luckily for Raymond, she connected early on with New York Book Editors, a firm founded in early 2013 that acts as a sort of middleman, attracting clients in need of manuscript editing and assigning them out to small group of freelancers like Raymond.

“They come from the New York traditional publishing world, and they’re bringing the in-house experience to both first-time authors who have a final draft and want to go find a literary agent and authors who are looking to go self-publish.”

In fact, most of the freelancers to whom I spoke often work on manuscripts destined not for self-publication, but for traditional queries to literary agents.

“I would say about 85 percent of my clients want to traditionally query,” Heyman said. “They’re not closed to independent publishing; it’s a great option for some people. But what most people don’t realize is that the effort it takes to promote your book when it is independently published is commensurate with — if not more intense than — the effort you’ll put into querying agents for one year.”

For Raymond’s client roster, the ratio of self-published authors to those pursuing the traditional publishing route is about fifty-fifty. I asked her how the editor marketplace has changed, both during her tenure at Simon and Schuster and later as she transitioned into freelancing. The biggest shift she’s noticed is how the marketplace has become more formalized, transforming from a rag-tag group of freelancers to the establishment of companies that help connect editors to authors more efficiently.

“Before these editing firms started to grow, you’d go on the internet and you’d have this book and you wanted to know how to get it published, and basically the only advice out there was to send your manuscript off to a million agents and see what happens.”

Without firms like New York Book Editors and companies like Reedsy, “I would have been a little bit more hesitant having to build and find clients on my own and navigating that world.”

So what services are these editors actually providing for authors? “What I found myself doing was basically providing a personalized MFA program for my clients,” Heyman said. “I’m looking at their work as a thesis, saying, ‘OK, we have to give you a crash course in style and voice and sentence structure.” She only works with “manuscripts I actually believe in,” so before even agreeing to take on a client, Heyman requests a five-page sample of their work. Assuming she thinks the author possesses real talent, she then takes between four to six weeks to produce a 10-page editorial letter that addresses all the structural changes and rewrite suggestions she feels is necessary for the book to be considered of professional quality. Often, she and the author review the letter over a Skype call.

Of course many writers, especially among the least experienced, have rather large egos that make them less receptive to the notion that their manuscripts are anything less than brilliant. And with every freelancer I spoke to for this article complaining about the number of inexperienced editors flooding the market, it seems clear that even authors who seek out professional feedback might not always find it. But with the near-daily profiles of self-published authors who hit it big as well as a growing trend of traditionally-published writers abandoning their New York publishers, the demand for freelance editing is set to rise. As self-published authors seek to supplant the Big Five publishers, they’ll first need to recreate the very production services that have allowed these stalwarts to dominate for so long.