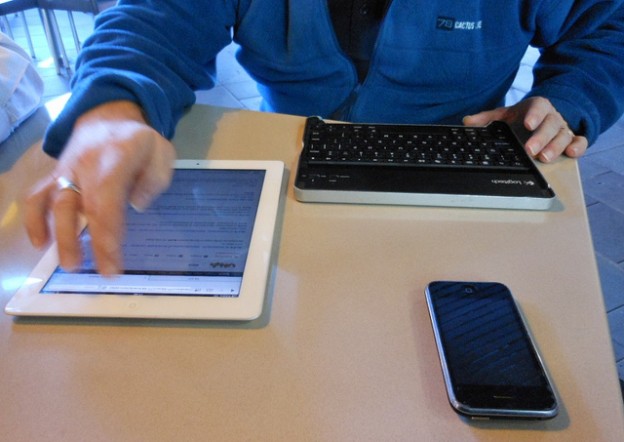 The 2015 Pew State of the News Media report, released on April 29, verifies what many media analysts have been saying for some time: mobile, if not the present, is the future of news.

But, at the same time, just because the mobile platform has emerged as the frontrunner in the race to capture audience engagement doesn’t mean legacy platforms are to be discounted.

"As a new one [platform] emerges, it's not replacing the older ones. The older ones are still important to maintain." - Amy Mitchell

“As the digital space grows and grows and expands and multiplies, these old legacy platforms are still around,” Amy Mitchell, director of journalism research at the Pew Research Center, told PBS MediaShift. “As a new one [platform] emerges, it’s not replacing the older ones. The older ones are still important to maintain.”

Based on an analysis of data from comScore, the latest State of the Media report found that 39 of the top 50 news websites get more traffic to their sites and associated applications from mobile devices than desktop computers. However, the report also found that for half of these sites, desktop visitors tend to spend more time per visit than mobile users. These news sites included legacy news outlets, digital-only organizations and international news brands.

When looking at the figures for NBC Digital, for example, which currently ranks as the third most visited digital news site after Yahoo-ABC News Network and the CNN Network, the average visit per desktop visit was 5.1 minutes — whereas an average mobile visit lasted 2.6 minutes.

“Certainly, those mobile numbers are pretty striking,” Mitchell said when discussing the momentum around the platform. “The challenge on there too is the time side.”

Yet the growth of mobile, despite telling figures, also reveals some nuances into where its presence is most felt. The report noted that among the top 50 digital native news sites, nine of them actually received more desktop traffic than mobile traffic. This is a greater proportion of sites gaining more desktop traffic when compared with the top 50 news sites overall. In other words, as the latest Mediatwits podcast pointed out, “being digitally native doesn’t necessarily translate to more mobile traffic.”

Like the surge in mobile consumption, the report’s findings on television news engagement reveals subtleties. Prime time viewership for the three major cable news channels — Fox News Channel, CNN and MSNBC — decreased by eight percent in 2014, and revenue growth for these news channels largely remains at a standstill.

Local news and network news, on the other hand, fared better. Local television had small gains in both audience and revenue growth compared to last year. Network news — which refers to the three major broadcast television networks that feature both morning and evening programming, ABC, CBS and NBC — also saw audience growth for the second straight year. The online presence of these network channels also remain top news sites.

Meanwhile, newspaper circulation fell by about three percent from 2013 to 2014. Pew’s report also pointed out, “Despite widespread talk of a shift to digital, most newspaper readership continues to be in print.”

If there is one definitive positive growth in media this year, it just might be in the realm of podcasting. The success of Serial, of course, has burgeoned podcasting’s reputation, but Pew’s data shows the media has been growing consistently over the past two years. And when comparing the percentage of Americans who listened to podcasts in 2008 versus January 2015, that figure nearly doubled, from nine percent to 17 percent.

“Advances in technology — in particular, the rapid growth in use of smartphones and mobile devices in addition to the increased ease of in-car listening — have contributed to the uptick of interest in podcasts,” the report explained.

The influence of social media, although not directly analyzed in this report, also harbored in the background of its findings. Pew previously found that about half of American adults who use the Internet report getting news about politics and the government solely from Facebook — which, given that news feeds are influenced by algorithms and the views of Facebook friends, might translate into polarized media consumption.

As for the overall reaction to the 2015 State of the Media findings? “I think if i were gong to sum up the sentiment, it’s really about the challenge, the extraordinary challenge that face news providers today,” Mitchell, the director of journalism research at the Pew Research Center, told PBS MediaShift.

The full report is available online.

For a discussion of the State of the News Media report, check out a recent Mediatwits podcast discussion: