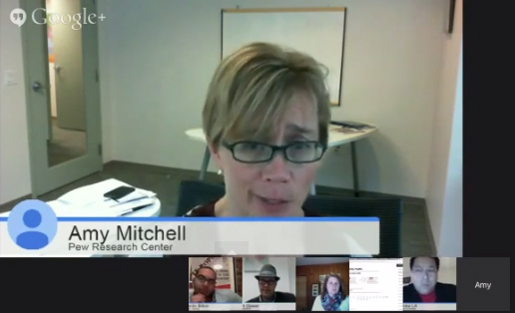 Amy Mitchell, director of journalism research at Pew, explains what the findings of their 2015 State of the News Media report.

Our news consumption is becoming increasingly mobile according to Pew’s annual State of The News Media report. Americans are now turning to their phones and tablets to catch up on the news. More people are visiting news sites like the New York Times on mobile than on their desktops. More than 75 percent of the Top 50 news sites in the U.S. received higher traffic from mobile devices than from desktops. As you might expect, the trend is the same for news organizations born on the web. But Pew found that being digitally native doesn’t necessarily translate to more mobile traffic. Meanwhile, advertising on the mobile web jumped 78 percent from the previous year while digital advertising grew as a whole. That’s good news for Facebook which owns the single largest share of both mobile and digital ad revenues. Mobile technology also helped podcasts achieve “a milestone moment” in 2014 with the success of “Serial.” Mobile devices account for nearly two-thirds of podcast downloads. The number of Americans that listen to podcasts has doubled since 2008, the study shows. And a third of all Americans listen to at least one podcast. We’ll take apart these findings with Amy Mitchell, director of journalism research at Pew Research Center; Ricardo Bilton, Digiday staff writer; Kerri Hoffman, PRX chief operations officer; and regular Andrew Lih, at American University. PBS MediaShift’s Mark Glaser will host and Jefferson Yen will be producing.

"There's no sense that news is figuring out how to get more of the pie." -Amy Mitchell on the prospect of publishers getting more ad dollars

Amy Mitchell is director of journalism research for the Pew Research Center. She is responsible for the center’s research related to news and information, including the annual State of the News Media report. Prior to joining Pew Research Center, Mitchell was a congressional research associate at the American Enterprise Institute, where she researched public policy and the relationship of the press, the public, and government. Follow her @asmitch

Kerri Hoffman is Chief Operating Officer of PRX, the award-winning public media company whose mission is to harness technology to bring significant stories to millions of people. She tweets @kerriprx

While mobile technology is ascendant that’s not to say other platforms are dead. For all the focus on digital, 56% of newspaper readers only read them in print. But that’s a dwindling population, and worse, newspaper publishers have been seeing their share of advertising revenue decline in addition to a fall in subscriptions. In 2005, newspapers made $47 billion in revenue from print ads. Last year, they made $16 billion. Advertisers are now sending that money to Internet giants. Facebook, Google, AOL, and Twitter own just more than 50 percent of the revenue from display ads.

Radio, it seems, is starting to undergo the digital revolution that print papers went through. More than half of all Americans have listened to online radio in the past month with 73 percent listening via smartphone. The survey also revealed more people are listening to online radio in their cars. Reflecting this change, digital ad revenue for radio increased 9 percent from the last year.

Is the move toward mobile going to continue or ever slow down? What does this mean for legacy and digital-native publishers? And will the rise in podcasting mean sustained business models for all the new shows and networks?