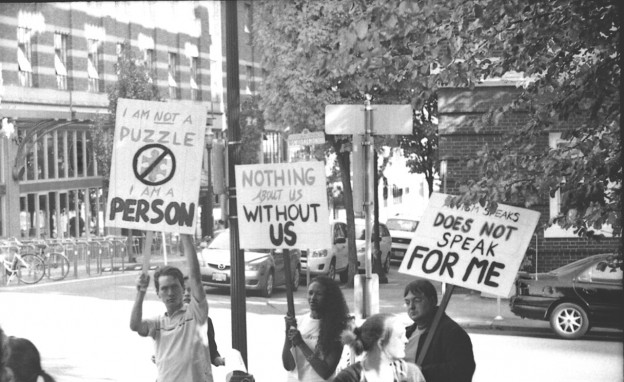 Photo by Philosophographlux on Flickr and used here with Creative Commons License.

The MDA Telethon announced its end on May 1. The Labor Day event, hosted annually by comedian Jerry Lewis from 1966 to 2011, was reviled by many disability rights activists and many people with disabilities and their allies. The earliest complaints about the telethon came in 1981 from a NY Times op-ed written by Evan J. Kemp Jr., who would become Chairman of the EEOC in 1990. He argued that the Telethon fostered prejudice against people with disabilities, and that “these prejudices create stereotypes that offend our self-respect, harm our efforts to live independent lives and segregate us from the mainstream of society.” When Kemp wrote this, he had been living with neuromuscular disease for 34 years.

In the early 1990s, protests against the telethon became vigorous. They were held in various cities at TV stations that aired local versions of the telethon and at the national telethon’s location in Las Vegas. A group called Jerry’s Orphans (a play on Jerry’s Kids), founded in 1991 by former poster child Mike Ervin, would protest at the local broadcasts of the telethon in Chicago. The group shot a short documentary, “The Kids Are All Right,” about their protests, and it is a wonderful educational tool to teach students about the problems with telethon fundraising techniques.

The Telethon fosters prejudice against people with disabilities; "these prejudices create stereotypes that offend our self-respect, harm our efforts to live independent lives and segregate us from the mainstream of society.” - Evan Kemp, Jr., former chairman of the EEOC

More recently, bloggers like Medicaid reform activist and writer Nick Dupree debunked the MDA telethon’s claims in 2009. As an outdated era of disability charity begging ends, journalism educators should remind students about the correct way to cover the disability community in America that is 56 million strong.

One reason disability activists despised the telethon was how it presented children and adults with disabilities as both objects of pity and inspiration at the same time. Attorney and anti-telethon activist Harriett McBryde Johnson said, “The telethon feeds out-dated stereotypes about people with muscle diseases and other disabilities. For 21 hours, on 200 stations, it makes people think that we are doomed to sad and tragic lives unless they find a cure.”

When writing about people with disabilities, journalists need to be careful not to fall into traps of presenting disabled people as superhumans or as tragic figures. The National Center on Disability and Journalism (NCDJ) at Arizona State University has many excellent resources to guide journalists in reporting on disability issues.

“Nothing about us without us”

A current similar clash is between the autistic rights movement and Autism Speaks, which has no autistic people on its board or in its management, according to the Autistic Self Advocacy Network (ASAN) in DC. ASAN, in contrast, is run completely by autistic adults and provides a voice for autistic people, instead of parents and caregivers. ASAN regularly questions the activities of Autism Speaks and has had protests of its activities.

Jerry Lewis repeatedly said demeaning things about people with disabilities. He called a disabled person “half a person” and said wheelchairs were “steel imprisonments.” And when disability activists criticized Lewis for his pity mongering, he said in 2001: “Pity? You don’t want to be pitied because you’re a cripple in a wheelchair? Stay in your house!” Obviously, these words angered the disability community.

But journalists use incorrect (and inaccurate) words about disability every day that upset disabled people, terms like “wheelchair bound,” “confined to a wheelchair” and “suffers from.” Since the 1980s, The Associated Press Stylebook has told journalists not to use these terms, yet they persist. The National Center for Disability and Journalism (NCDJ) also has a style guide that explains clearly what terms not to use.

The National Center for Disability and Journalism was founded in 1998. It has been housed at Arizona State University since 2008.

Disability stories are on every news beat

New elementary school being built in your town? A journalist covering education should ask about how the new building and programs will accommodate children with a variety of disabilities.

In covering sports, elite disabled athletes who are training for the Paralympics may be in your city. And the International Paralympic Committee releases news almost daily. For example, in early 2015 sailing was dropped from the Paralympics, and there is an international effort to get it reinstated.

The disability rights community is all over social media. Groups like ADAPT and ASAN are activist groups run by people with disabilities, and they and their members have active Twitter feeds and Facebook pages. Ari Ne’eman, the co-founder of ASAN, is the first autistic person to serve on the National Council on Disability, whose Council members are all disabled people, appointed by the President or Congress. Many local and national disability organizations are excellent, but journalists should not assume they speak for disabled people, especially if they don’t have people with disabilities in leadership positions.

Only recently has the news media been reporting about people whose disabilities aren’t apparent. The Invisible Disabilities Association has been educating others about the topic, and NPR aired a story on the specific discrimination they face: “It is hard to pinpoint the number of Americans with an invisible disability, but it’s estimated there are millions. Their conditions may range from lupus to bipolar disorder or diabetes. The severity of each person’s condition varies, and the fear of stigma means that people often prefer not to talk about their illnesses.” In fact, in recent employment discrimination cases centering on disability, the most commonly cited conditions were invisible ones, according to Cornell University’s Employment and Disability Institute.

Learn about the 1990 Americans with Disabilities Act

One reason protests against the MDA Telethon began in the early 1990s was because the ADA had just been passed, and citizens with disabilities expected discrimination and prejudice against them to recede. The ADA provides broad civil rights to the disability community and mechanisms to fight discrimination against disabled people. The U.S. Department of Justice, which enforces parts of the ADA, summarizes the law this way: “The ADA prohibits discrimination and ensures equal opportunity for persons with disabilities in employment, state and local government services, public accommodations, commercial facilities, and transportation. It also mandates the establishment of Telecommunications Devices for the Deaf (TDD)/telephone relay services.” In 2008, the ADA Amendments Act was passed, and after President Obama was elected, he revised and strengthened ADA regulations in 2010. In the past five years, the ADA is finally being vigorously enforced and this means many good stories for journalists to pursue.

Too often the disability community is presented in the news media as white people or only as people who use verbal speech to communicate. A wonderful source about the black disabled community is California’s Leroy Moore, creator of the Krip-Hop Nation, a collective of disabled hip hop artists. He works as an activist to try to stop police violence against people with disabilities and people of color and is working on a documentary on the topic. Here’s an interview with him in 2012 from Disability Right Now.

Do stories of substance

Public Source, a news site covering Pennsylvania, has done several in-depth news stories on disability issues that rarely get covered. In November 2014, one story discussed the potential loss of communication devices that people with communication disabilities rely on due to expected major changes in Medicare/Medicaid.

In March 2015, it investigated nursing homes that were trying to deny residents webcams that were used to stay in contact with family and friends, as well as ways to document potential abuse at the facilities.

Be careful about photos

Most photojournalists assume they know how to portray people of all backgrounds; however, in the case of people who have a visible disability, it is better to ask them about angles for shots and whether disability technology or equipment (power wheelchairs, hearing aids, white canes, etc.) should be in the shot prominently or should be de-emphasized.

When attorney and disability rights activist Harriet McBryde Johnson wrote a 2003 essay for The NY Times Magazine about why disabled babies should be allowed to live, she negotiated with The Times so that she would have the final say on what photos of her they used.

The late Harriet McBryde Johnson in The New York Times picture she approved.

Because the disability community has been neglected by news media, fresh story ideas abound. You can invite local disability activists or staff from an independent living center to speak to your class, and you will be giving your journalism students long-term sources and many story ideas for their future reporting.

Beth Haller, Ph.D., a former print journalist, is Professor of Journalism/New Media at Towson University in Maryland. She is the author of the book, Representing Disability in an Ableist World: Essays on Mass Media (Advocado Press, 2010) and co-editor of the forthcoming Routledge Companion on Disability and Media. Haller is on the board of the National Center for Disability and Journalism. She currently maintains a blog on disability issues in the news, Media dis&dat, as well as a website on media and disability research.