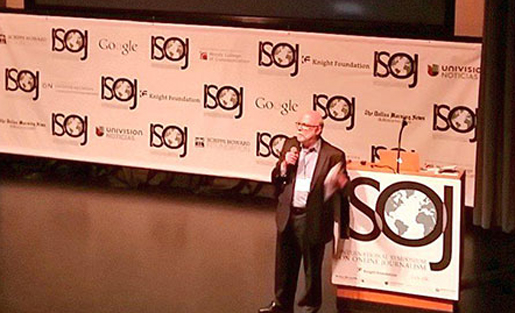 Rosental Alves opens ISOJ 2015 at the Blanton Museum of Art on The University of Texas campus. Photo by: Aisling Niestroy.

Innovation took the stage at the 16th annual International Symposium on Online Journalism (ISOJ) April 17-18 in Austin, Texas. ISOJ has a long-standing reputation for bringing together the best and brightest of digital media professionals and scholars. Led by the force of nature that is Rosental Alves, this conference has become known for high-quality networking and insight on the future of journalism.

"ISOJ has been progressive with the types of digital media research it has accepted over the years, and now that research will be much more widely available."

Representing “big technology” was opening keynote speaker Bonita Stewart of Google, who discussed consumer online behavior. “We no longer go online, we live online,” Stewart said. She shared that while 90 percent of what we do online involves apps, for news readers, 72 percent of them use the mobile Web for their news. This highlights the need for websites optimized for mobile devices. She said that users look at their phones an average of 150 times per day.

Stewart’s talk provided an introduction to discussions that perpetuated throughout the weekend. On online advertising, she said millennials prefer relevant ads and are willing to engage with brands. She encouraged people to use Google Trends to spot an emerging trend or “moment,” and this related to later talks about social media as a function that must be anchored in the effective use of analytics.

But, it was Stewart’s focus on “pitching” Google products during her talk that some participants found off-putting.

@Rosental In my opinion, it was a mistake for Google to send a sales person with pitch to represent it at #ISOJ.

While the Texas Tribune hasn’t included native advertising yet in their business model, publisher and chief operating officer Tim Griggs discussed the relevance of events to their revenue mix. Events are also something that the Dallas Morning News has produced. Publisher and chief executive Jim Moroney indicated that developing a unit to acquire businesses that grow revenue would be required to sustain a news organization.

Media economist Robert Picard of the Reuters Institute at the University of Oxford provided context to many of the solutions being discussed at ISOJ. However, his points about the prevalence of screens as the primary method of communication and the pervasiveness of mobile and social media were not news to the ISOJ crowd. His key insights were that media needed to think differently about business and revenue models, the integration of interpersonal and mass media and the highly competitive nature of the modern media environment.

For journalism educators and schools, he encouraged a similar innovation focus. “You cannot prepare people for the future by hiring journalists with 30 to 40 years experience – I don’t care how many Pulitzers they have – and bring them in to teach young people how to solve the problems of the future.”

A panel, led by Robert Hernandez of the University of Southern California, dealt with virtual reality storytelling projects. There was an exhibit area that featured projects by Emblematic Group and Gannett Digital that allowed attendees to experience virtual reality first hand. And attendees could take home Google Cardboard, a low-cost virtual reality product that can be used with a smartphone.

Robert Hernandez of USC kicks off the panel on virtual reality. Photo by: Jordon Brown.

ISOJ has become known for the diversity of attendees and speakers. Keynote speaker Isaac Lee, president of news and digital for Univision Communications Inc. and CEO of Fusion, discussed diversity in America and the role it plays in media strategy. He talked about the declining importance of the website when so many users interact on platforms like Facebook or SnapChat. He also highlighted the importance of context and used John Oliver’s Last Week Tonight as an example of a good use of long-form explainers that combine information and humor. Lee encouraged the audience to be bold and challenge orthodoxy. “If you think that a group of white dudes can produce diverse content, you’re lost,” Lee said.

Isaac Lee of Univision Communications Inc. and Fusion is interviewed by Jay Rosen of NYU.

During the Q&A session, Lee was interviewed by New York University’s Jay Rosen, who asked him what questions he felt media scholars might consider. “We all want to know what makes shareable content, spreadable media,” Lee said. He added that a better understanding of the role of personalization in media would be necessary.

This year’s program had panelists from across the globe with 35 countries represented, including Russia, Pakistan, Nepal, Venezuela, Brazil and more. The panel “How Journalists are Using the Internet in their Struggle for Democracy, Human Rights and Press Freedom around the World” featured nine international journalists. It offered a reminder that while all news organizations struggle with identifying sustainable revenue models, there are other challenges in places where the simple act of practicing journalism is dangerous and often deadly. Jahanzaib Haque, editor of the Pakistani site Dawn.com sarcastically asked, “Isn’t journalism so much more fun in our countries?” He continued, “When my guys say to me ‘oh, we’re so sick of dealing with the terrorist attacks every Friday after prayers.’ And I say ‘Guys, think about it, you’re not reporting on traffic accidents.’ So I keep them happy that way.” At least he has a sense of humor about it.

A New Model for Research

Alves is expertly assisted on the research segment of the conference by Amy Schmitz Weiss, an associate professor at San Diego State University. ISOJ is unique in that it is one of the few conferences that integrates scholars and professionals, thus encouraging productive interaction and discourse. Schmitz Weiss introduced the new online version of the #ISOJ Journal that offers multimedia and interactivity features and is now openly available on the Web. ISOJ has been progressive with the types of digital media research it has accepted over the years, and now that research will be much more widely available and provide researchers with many new formats to tell the stories of their work. Topics in the journal include research on Twitter, commenting, campaign coverage and defining data journalism.

With a pre-conference workshop held by PBS MediaShift on metrics and analytics and the post-conference Iberian-American Colloquium, much ground was covered over four days. More than 15,000 tweets chronicled the event with the #isoj hashtag, and videos of the conference will soon be available at online.journalism.utexas.edu.

I was encouraged to see several hands go up in the audience when asked how many students were in attendance, including a contingent of more than 20 from my program at Texas State University. ISOJ is a wonderful way for students to learn about current issues and technologies and to network with some of the most progressive professionals in the field. Many thanks to Rosental, Amy and the UT team for their efforts in bringing this invaluable event together every year.