How Social Media ‘Decided, Dominated and Directed’ the Nigerian Elections 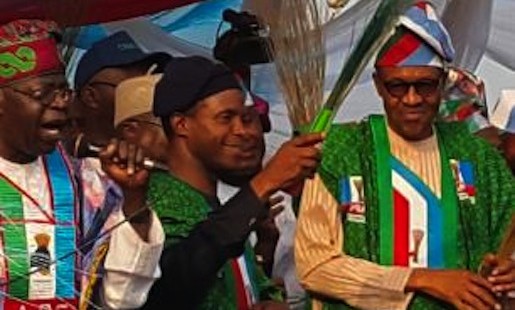 The recent election of Muhammadu Buhari as president of Nigeria has been hailed internationally as a historic transfer of power for Africa’s most populous nation. Photo by Sunday Dare.

The recent election of Muhammadu Buhari as president of Nigeria has been hailed internationally as a historic transfer of power for Africa’s most populous nation. It was the first in which a sitting president was defeated at the ballot box.

Sunday Dare, an ICFJ Knight Fellow who worked in Nigeria in 2011 and 2012, is currently chief of staff and media adviser to the head of Buhari’s political party, former Governor Bola Tinubu.

"Social media are able to set an agenda just as the legacy media always did. Through Twitter and other platforms, they kept on the issues. Increasingly, I see governors, even the presidency, paying attention to the social media." - Sunday Dare

Dare chats with ICFJ’s Jerri Eddings about the media’s role in the election and the power of social media in ensuring transparency.

Jerri Eddings: How did the media perform during the election?

Sunday Dare: There was little scrutiny of political advertising in newspapers and on television. The content was reckless, inaccurate and irresponsible. In terms of the advertising, it was easy to know which side the media were on, whether for the ruling party or the opposition. Ordinarily that should not be the case. They should be objective. In that regard, the media came short of performing professionally.

In terms of comprehensive coverage, I think the media did well. They covered the campaigns, the issues, the personalities. They did a good job.

But I think this election was decided, dominated and directed by social media. The power of social media came out for this country. Social media played a central role as a watchdog in keeping the integrity of the process. Within minutes of votes being counted at a polling unit, the results were all over social media. Ordinary people with Excel sheets were doing tallies. At the end of the day when it was announced officially, the results matched. So social media were central because of the immediacy, because it was in the hands of so many citizens who were involved, who were interested. In a way, social media seized the day from the legacy media. You had almost everyone depending on social media for the breaking news. Social media came alive for us this time.

JE: Was social media more important than traditional media in this election?

SD: Absolutely. Social media with all their flaws had the power of immediacy. They’re also very participatory. In an election where you have citizens who are participating, they were also providing the news and information surrounding the elections. It was an empowerment of people through their votes, and also through their ability to disseminate information. That is not to say the legacy media didn’t play a role. But the social media role was central.

Legacy media played its traditional role, in terms of analysis and punditry. Also they had to keep alive the social media bloggings on their websites. People wanted to make comments, write their views, post pictures. So you had a convergence. But social media were media in the hands of the electorate.

JE: What does it mean going forward?

SD: It’s going to be difficult for any government right now to ignore social media. Social media are able to set an agenda just as the legacy media always did. Through Twitter and other platforms, they kept on the issues. Increasingly, I see governors, even the presidency, paying attention to the social media.

JE: Given President-elect Buhari’s reputation for limiting rights the last time he led Nigeria, what are his policies regarding media?

SD: What has come out clearly so far, the president has said that just as he respects the freedoms and rights of Nigerians, the media will be allowed to play its role under the constitution. I think that was very significant considering when he was president in the past, the media came under a bit of a hammer.

JE: What has the transition from journalist to political operative meant for your personally?

SD: It’s like when you’re watching from the sideline, you’re at the ringside, you see the kicks, and you think that’s all of it. Then you get an opportunity to step into the ring, and you feel it. That’s the transition. After years of speaking truth to power, writing about what’s happening, you get an opportunity to be with the players, be part of the process. Transition is from the theoretical platform to the practical platform. The experience you had on the outside becomes really important in understanding what happens on the inside… For me it’s been really exciting; it’s also been a steep learning curve.

JE: Are journalists skills useful in your new role?

SD: Yes. Any politician or leader that lacks writing and communication skills will be in big trouble. Because you will not be able to communicate effectively with your constituency. A well-written speech can turn things around, can bring hope.

JE: What do you ultimately hope to see from this process?

SD: Nigerians have come to a place where this country has the choice to run a government that’s transparent, responsible and can bring about the things that are desired. We have an opposition that rode to power on the mantra of change. Nigerians believed in this philosophy and have given their support to this government. Now this government must keep faith. The challenge of yesterday remains the challenge of today. The problems are there. There are no shortcuts. This government must step forward and confront the problems. If ultimately they fail, the power of the voters, of the people, should reject leaders that fail. That power can be used against them.

In 2011 and 2012, Sunday Dare worked as an ICFJ Knight Fellow in northern Nigeria where he trained and mentored journalists at the Daily Trust newspaper and Freedom Radio. Prior to the fellowship, he spent more than two decades working as a journalist in Nigeria and the United States, including an eight-year stint as chief of VOA’s Hausa Service. His book, “We Are All Journalists Now – Africa in the Age of Social Media,” was published by Oxford University Press.

Jerri Eddings (@JerriEddings) is the Senior Program Director, Knight International Journalism Fellowships at the International Center for Journalists. Eddings supervises and implements global programs, including health and development fellowships in Africa. She has extensive experience in the United States and Africa as a reporter, editor, television producer and director of media capacity building programs. Previously, she worked as a foreign correspondent for the Baltimore Sun in Southern Africa (1990-94), as Atlanta bureau chief and then chief congressional correspondent for U.S. News & World Report (1994-97) and as director of the Freedom Forum’s Africa media center in Johannesburg, South Africa (1997-2002). She also served as managing editor of Africa programming for Howard University Television (WHUT), a PBS station in Washington (2002-04), and as managing editor of Editors’ World, a Los Angeles-based news organization that focused on improved coverage of global issues (2005-07). Eddings holds a B.A. in journalism from the University of South Carolina and is a former Nieman Fellow at Harvard University.

This post originally appeared on ICFJ.org and is published here with permission. The International Center for Journalists (ICFJ) is at the forefront of the news revolution. Our programs empower journalists and engage citizens with new technologies and best practices. ICFJ’s networks of reporters and media entrepreneurs are transforming the field. We believe that better journalism leads to better lives. For more information, go to www.icfj.org.