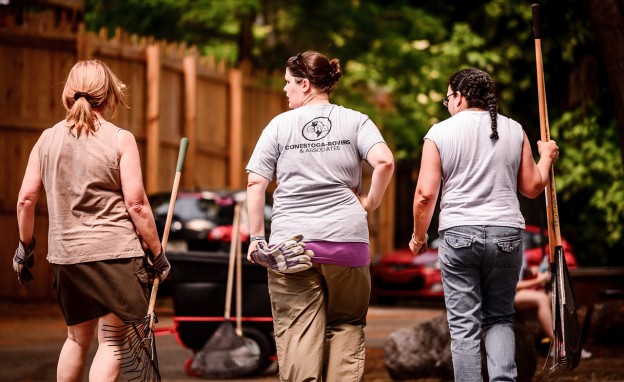 Photo by Steve Janosik on Flickr and used here with Creative Commons license.

Since 2010, I’ve been teaching a graduate class in Indiana University’s Journalism program, requiring that students complete 20 hours of service work in the community as part of their final grade. The reaction from students has been powerful. One student noted that the experience “made me examine my privilege in a way that was really uncomfortable for me.” Responses like this lead me to believe that service-learning should play a role in all journalism education programs.

Service-learning in institutions of higher education is not new. Although Tulane University garnered national headlines when it implemented a community engagement requirement for all its students following Hurricane Katrina, that institution is not alone in encouraging student engagement in the community. Campus Compact, a national organization that tracks service-learning in tertiary institutions nationwide, reported almost $10 billion in service provided to communities by students from more than 500 U.S. institutions during the 2011-2012 academic year alone.

"Is it possible that service-learning experience will guide students to think differently about covering social issues when engaged in the practice of journalism? I certainly hope so."

For my class, titled Media & Society, students choose to work at one of several local non-profits focused on addressing social issues in the community – including domestic violence, food scarcity, mentoring for at-risk young women, interacting with prisoners, caring for the elderly, and serving families in financial crisis. To tie this experience to the rest of the course, students conduct research into media coverage of these issues across media outlets, comparing the messages contained in the coverage with their personal experiences derived from working with those issues up close. In the resulting content analyses, students often find the media coverage to be formulaic, superficial, and devoid of input from anyone other than the usual suspects.

Photo by US Army Africa on Flickr and used here with Creative Commons license.

Living in Louisiana at the time of Hurricane Katrina, I participated in a study of how non-profit organizations played a role in post-hurricane recovery. Being close to those events and observing individuals’ and communities’ responses unquestionably influenced my views about the importance of service. My philosophy is that those with the opportunity to study and teach at institutions of higher education have an obligation to the communities in which we find ourselves. Why shouldn’t those same obligations extend to journalists?

I’m not a lone voice in the wilderness. I was interested to see a report last year covering the City University of New York’s development of a new MA program in social journalism. The effort, as described by program coordinator Jeff Jarvis in his post, is motivated by a shift “from seeing [journalism] primarily as a producer of content for masses to become more explicitly a service to individuals and communities.”

Journalism as a service to individuals and communities? Amen! But it may not be an easy sell to all journalism educators, students, or future employers. So, here’s some help with the justifications:

First comes the requisite “democracy needs journalism” talking point. Current discussion about journalism and its place in American society regularly considers how news, information, and democratic debate figure into local communities. For contemporary journalism education programs, the difficulty lies in ensuring that students acquire necessary professional skills and an appreciation for the democratic norms long associated with the practice of journalism in the United States. It is often said that “information is the currency of democracy.” Surely there’s a place for journalism education in helping to ensure the continued circulation of that currency. Service-learning is one way to combine all these threads.

Second is the matter of framing, a ubiquitous term employed to describe the lens through which media stories are told. Framing assigns blame for problems, thus signaling whose responsibility it is to address them. Politics may be the “art of the possible,” but media framing delimits the range of public policy possibilities that are even open for political debate. For journalism students, service-learning can promote awareness of key social issues and give students a chance to judge for themselves how these issues are covered in the media. The hope, of course, is that time spent with service-learning as a journalism student may result in more discerning reporting produced in the future as a working professional.

Third is the issue of practical experience. Service-learning provides students with tangible insights into how the media function in American society, particularly when it comes to difficult social issues. Service-learning is often students’ first unmediated exposure to issues such as homelessness, incarceration, domestic abuse, and food scarcity. Ideally, after exposure to these issues and to people who live with them every day, students will develop a more compassionate attitude toward covering vulnerable populations. This exposure has the potential to compel students to become more involved in their communities beyond the time when it is required for course credit. And that is a public good no matter how one frames it.

Naturally this may raise questions about whether requiring journalism students to volunteer in non-profit organizations crosses the imaginary line of objectivity long at the center of American journalistic practice. Will students – future journalists — think differently about social issues after learning about them first-hand? I certainly hope so.

Bill Kovach and Tom Rosenstiel, two respected journalism scholars, write frequently about journalism’s place in society. They suggest that journalists are responsible for serving as investigators, witnesses, role models, empowerers, and facilitators of public debate. The new appreciation for others’ perspectives born of service-learning offers insights that journalists need to have, particularly in today’s environment where the public holds the media in such low esteem.

The latest American Journalist survey, conducted by my colleagues at Indiana University, finds almost 70 percent of respondents saying that “analyzing complex problems” in society is an extremely important journalistic task. Armed with service-learning experience, tomorrow’s journalists can be one step ahead in meeting this important challenge.

Dr. Emily T. Metzgar is an associate professor in the Media School at Indiana University. She is co-editor of a forthcoming volume titled, The Course Reflection Project: Faculty Reflections on Teaching Service-Learning. This commentary is adapted from her chapter in that book titled “Media & Society: A Service-Learning Class.”