Discovering the Core of My Immersive Storytelling Startup 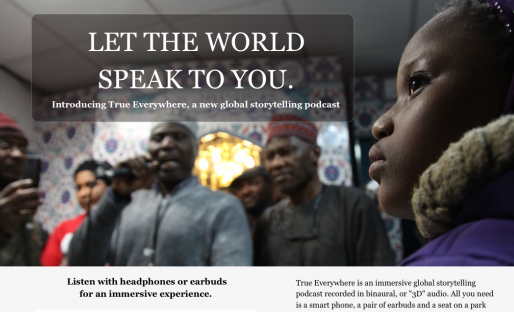 The beauty and torture of living in a city like New York, and doing a program like Tow-Knight, is the truly outrageous number of opportunities that present themselves to you over the course of a week. That kind of territory is fertile ground for a budding startup. But it also means being pulled in a hundred different directions all at once, all before you’ve really even had time to define what your business is actually about. At every decision point this semester, I’ve had to repeat one question to myself: where is my core?

“Neato” technology, or a new kind of story?

The questions started early in the semester, when Jeff Jarvis asked me if I’d finally given up on marketing my project as a “3D audio podcast.” Yes, I told him, proudly. My project was really about “immersive storytelling”; the fancy binaural audio was simply one way of helping people get deeper into a story. He gave me a congratulatory fist bump.

"At every decision point this semester, I’ve had to repeat one question to myself: where is my core?"

But his mood changed when I began to tell him about all of the other elements I wanted to add to the project: a user-generated component, possibly, and an interactive platform where people could share each other’s work. As I picked up steam, I mentioned a news organization that might be interested in partnering if I were able to incorporate a few of those elements. Whoa, he said. You can do immersive audio, or you can do user generated content. Those are two very different projects, and if you try to do both, you’ll end up doing neither. He was right. After that conversation, I felt more centered on what I really want to do — professionally produced, fully-reported pieces.

But later that week, as I was describing my idea to a freelancer who was interested in producing for me, I still found myself struggling to articulate exactly what I was looking for. Sure, it’s recorded in pristine stereo. Sure, it “takes you inside of a story.” But what story? This answer is clear inside my own head–there’s a list in my notebook of 20 stories I think are perfect for my show. The work will be putting into words what they all have in common and then actually producing stories that demonstrate that in the clearest way possible. And, until I can do that, it may be too early to start inviting new people into the production process.

Lately I’ve had the opportunity to get into a few great conversations with potential partners who seem to share many of my same goals. I’ve found that, especially when money is involved, it’s incredibly easy to want to jump on their bandwagon. My mentor Sophie Halliot gave me a really great list of questions to ask myself whenever I’m thinking of getting involved with another organization:

The second, about achieving the “full extent of my vision,” is really salient these days, particularly as I start applying for grants and tackle topics like sponsorship and native advertising. Even when you share similar ideals with an organization, they may have a different vision of how you fit into those ideals. I didn’t found a startup to fulfill someone else’s vision.