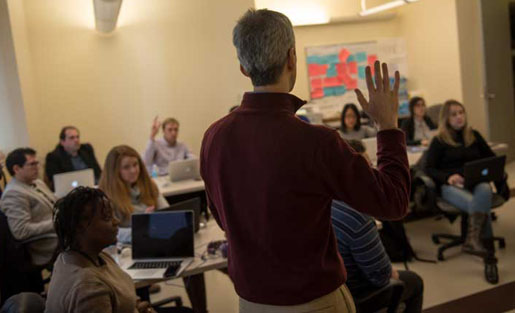 We recently welcomed our fifth cohort, our biggest ever, with 21 fellows from eight countries. In addition to developing their own startup projects and taking entrepreneurial journalism classes, our fellows will participate in weekly workshops, hear from more than 30 guest speakers and visit Twitter, Google, Mashable, Quartz, Kickstarter and other cool places.

This new class of fellows will join the ranks of entrepreneurs who have launched projects like Narrative.ly, Skillcrush, Informerly, and The Broad Experience in our four-month entrepreneurial journalism program.

"This new class of fellows will join the ranks of entrepreneurs who have launched projects like Narrative.ly, Skillcrush, Informerly, and The Broad Experience in our four-month entrepreneurial journalism program."

Meet some of our Fellows

Ilan Greenberg is the founder of Coda Story, a single-issue web platform that reports on one crisis at a time and stays with it, providing unique depth, continuity and understanding.

Rebecca Harris is the founder of Purple Politics, a news website for college students that explains the news in a way that’s clear, engaging and unbiased.

Rebecca has worked for political campaigns, the United States Senate and for new media startups like NowThis News and GoKicker.

Philip Rosenstein is the founder of White House Press Briefings, a comprehensive information source for quick and accurate reporting on the White House.

Philip worked as a writer and was director of content marketing for the financial news startup FinancialBuzz.com, writing primarily on global and national politics.

Tinashe Mushakavanhu is the founder of The Mobile News Agency, an optimized news service for mobile phone users in Zimbabwe.

Tinashe has worked as an editor, columnist, PR and social media strategist, and publisher. He co-founded one of the first co-working spaces in downtown Harare with two friends.

Chad has a strong background in communication, design and content, having worked with senior government, media and tech providers.

Nuria Saldanha is the founder of Voz, an online platform that promotes social and collaborative journalism focused on Brazil’s peripheries, which are called Favelas.

Núria has worked as reporter and anchor in Brazilian news company BandNews TV, where she conceived and hosted the BandNews Mercado show.

A version of this post first appeared in a Tow-Knight newsletter. You can read more about how to apply for the Tow-Knight Center Entrepreneurial Journalism’s annual fellowship program here.