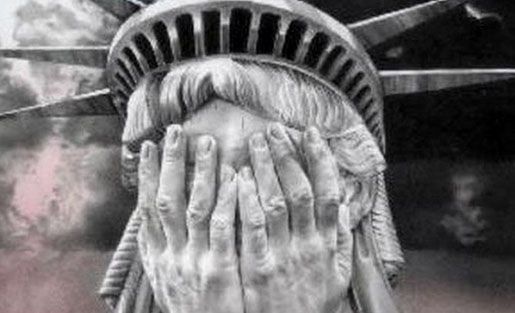 A crying Statue of Liberty appears on the home page of Russia Insider.

Russia Insider has a crying Statue of Liberty on its home page. She’s weeping into her palms as black clouds or smoke billow in the background. There’s also a poster of a Russian man dubbed “the hero of our time” for fighting alongside Ukrainian separatists.

Some of what you see or read on Russia Insider may appear to be propaganda, but it’s actually media criticism, says founder Charles Bausman.

“I think that you can interpret it as propaganda, or you can say, look, it reflects the opinion of a lot of articles on our site, which really argue that American foreign policy, in regards to Ukraine and Russia, is badly, badly mistaken.” -Charles Bausman

After about half a year in operation and amassing 15 million page views, the website has launched a Kickstarter campaign to raise $20,000. As of today, it is at about $23,000 with three weeks to go. More campaigns are being planned as the English language website looks to crowdfunding for a future.

Before raising any money on Kickstarter, Russia Insider started by banking tweets, Facebook shares and Tumblr posts. Using Thunderclap, posts and tweets were published simultaneously, giving their message reach to more than 115,000 in social media.

Speaking from Moscow, founder Charles Bausman said the Statue of Liberty photo is “suggesting that American foreign policy is mistaken in many ways.”

And because he isn’t well-known outside of Russia, the “Hero of our time” poster of Igor Strelkov is “trying to provide imagery that shows that’s there’s a lot going on in Russia that people in the West aren’t aware of.”

When asked how Bausman would respond to someone who says Russia Insider seems to be a Russian propaganda response to Western media bias, he said:

“I think that you can interpret it as propaganda, or you can say, look, it reflects the opinion of a lot of articles on our site, which really argue that American foreign policy, in regards to Ukraine and Russia, is badly, badly mistaken.”

The website’s aim isn’t propaganda but to point out where American and European media are wrong about Russia, Bausman said.

“Because they’re [western mainstream media] very critical of Russia and bias against Russia, we often times take the other side. So you could look at that and say ‘This seems to be like a pro-Russian site or something, a pro-Russian government site,’ but that’s not what we’re doing.”

“What we’re saying is it’s the information about Russia that is very biased and slanted, and we’re trying to point this out.”

The site that describes itself on Facebook as “a Western view of Russia, without the anti-Russian bias” has published little or no criticism of the Russian government, preliminary analysis by Through the Cracks found.

There is no criticism of Russian media either because “we’re not a Russian site,” Bausman said.

“We’re mostly Americans, also from Canada and the UK, and what we’re really talking about is our own media,” he said.

About half of the site’s readers are in the United States and Canada, Russia Insider said.

Bausman said he has noticed bias in western media for 20 years.

“The narrative in the western media became so far departed from reality in my opinion of what’s going on that I felt it was just like a civic responsibility,” Bausman told Russia Today (RT) after the site’s launch. “I mean somebody has to finally stand up sometime and say, OK, enough is enough. I’m not going to listen to this anymore.”

The crowdfunding campaign money will be used to hire a video producer and a full-time crowdfunding manager to run future campaigns. Bausman said he would never accept money from any government.

Crowdfunding, he said, is “an ideal solution.”

“I like that crowdfunding is very democratic and that if you do well by people who funded you it can be an ongoing thing,” he said.

Through The Cracks Editor Khari Johnson contributed to this story.