How Wearable Devices Fare Among Students 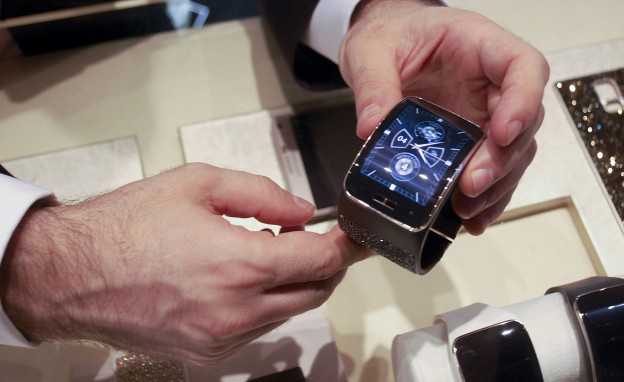 Photo by j-No on Flickr and used here with Creative Commons license.

Wearable technology is becoming a common topic in daily news coverage — from discussion on the latest physical fitness trackers to buy and the hype around the Apple smartwatch that will launch this year. Wearable technologies, devices that can track and hold data about individuals and the environment around them, are gaining traction in the market.

The market research firm SSI states wearable technologies will become popular in the mainstream market within the next two to three years. In fact, a recent survey conducted by Harris Interactive of 2,577 U.S. adults, about 46 percent said they would be interested in owning a wearable technology device. Another study found that those who own the device said it enhanced their life. Specifically, respondents stated they felt more informed, it helped with their personal efficiency, they felt more intelligent, and it helped with their career development.

A majority of the young adults surveyed (59.6%) said they would be interested to use a wearable technology device in their classes in comparison to 40.4% who said they wouldn’t.

Photo by Lubomir Panak on Flickr and used here with Creative Commons license.

These statistics show that wearable technology devices are being adopted in the private and corporate sector. The education sector is not far behind. The 2014 Horizon Report found that wearable technology will become one of the next big technologies to be adopted in higher education within the next three to five years. Universities around the world have started to experiment with the use of wearable devices for classroom instruction. Some U.S. journalism programs and faculty now have Google Glass and are experimenting with its use in classes. In fact, Robert Hernandez, a journalism professor at the University of Southern California had a Google Glass class last fall with an aim to create glass-centric software for journalists. Despite Google’s recent announcement changing its approach to the product, educators are still exploring its use in the classroom.

As journalism programs begin experimenting with wearable devices, some preliminary questions about this innovation must be explored before its expansion.

In general, how is the device perceived and adopted by the greater population of young adults? How do young adults perceive its general use in higher education? These answers can help educators gain insight into the wearable technology trend.

This article highlights some of the findings from a survey that I conducted in 2014 about young adults’ perceptions and adoption of wearable technologies. (To view the full paper, you can go here to download it). Before I jump into the findings, it’s important to discuss the concept of technology adoption.

Rogers and Diffusion of Innovations

Scholar Everett Rogers developed a theory of how we adopt a new innovation or technology based on the user and the innovation’s attributes, called the Diffusion of Innovations. According to Rogers, innovations will go through an adoption curve in the market that consists of innovators at 2.5%, then the early adopters at 13.5%, the early majority that will then represent another 34% over time, the late majority at 34%, and laggards representing the end of the adoption curve at 16%. Based on current market trends, wearable technology can be considered to be at the early stage of Rogers’ adoption curve based on the number of people who are currently adopting it.

My study explored how young adults perceive and adopt wearable technology through the lens of Rogers’ innovation adoption framework.

Based on the 454 young adults who responded to the survey, more than 80 percent of respondents were aware of wearable technology devices. However, only 16 percent owned a wearable device. Of those who owned a wearable, the majority stated they owned a health or fitness monitor over other types of devices.

Of the respondents who adopted a wearable device, all of Rogers’ innovation attributes (i.e. relative advantage, compatibility, complexity/ease of use, trialability and observability) aided in their adoption of the technology.

For non-adopters, the lack of necessity, lack of knowledge of the device, and cost were the main reasons for not owning one. However, not all respondents were against future adoption of such device since almost 30 percent were going to buy one in the future and another 46 percent were uncertain.

Wearable Technology Possibilities in the Classroom

As for its use in education, young adults were categorized into two groups as interested or non-interested. Of the respondents who were interested, relative advantage, compatibility, complexity/ease of use, trialability and observability did play a role in their potential use and adoption of such device for educational purposes in comparison to non-interested students.

As for specific classroom use, the majority of respondents identified the multimedia capabilities (e.g. video or photo) as well as information gathering and storage features as possible aids in engaging with class materials. A majority of the respondents (59.6 percent) said they would be interested in using a wearable technology in classes in comparison to 40.4 percent who said they wouldn’t.

So what do all these findings show? Wearable technologies among young adults remains in a very early stage. Considering Rogers’ adoption curve, we are still in the innovator to early adopter stage.

There is a greater awareness of wearable technology devices, but fewer people who actually own one. Both of these findings reflect a larger trend nationally and globally of this kind of device and its adoption in the marketplace. Yet young adults who didn’t own one were not against the idea and a substantial percentage would consider adopting wearable technology in the future.

Also, those who stated they own a wearable are using them for information gathering and utility purposes — albeit for physical fitness tracking. However, these purposes can be extended into the classroom setting as students see the value of technology in their learning. Thus there is untapped potential for innovation in the classroom.

Numerous studies have shown that educators who adopt technology can have an impact on students’ adoption and can influence their students’ behaviors and perceptions of technology by how they present and use them in the classroom.

Through new ways of exploration and experimentation with such innovations, journalism and mass communication programs can keep pace with the market, remain sustainable for the future, and help in the creation of a new market of professionals who have the latest skills and techniques to do their job. The time is ripe for exploration and innovation in education and wearable technology can be one pathway in this direction.

If you would like to see more of the findings from this study, you can download the full paper here: http://www.slideshare.net/digitalamysw/wearable-techineducationschmitzweiss

Amy Schmitz Weiss is an associate professor in the School of Journalism and Media Studies at San Diego State University. Schmitz Weiss is a 2011 Dart Academic Fellow and has a Ph.D. in journalism from the University of Texas at Austin. She teaches journalism courses in writing and editing, multimedia, web design, data journalism and mobile journalism. She is also the 2011-2012 Recipient of the AEJMC Bridge Grant with funding from the John S. and James L. Knight Foundation that led to the creation of a mobile news app, AzteCast, for the San Diego State University campus in spring 2012. Schmitz Weiss is a former journalist who has been involved in new media for more than a decade. She has worked in business development, marketing analysis and account management for several Chicago Internet media firms. Her research interests include online journalism, media sociology, news production, multimedia journalism and international communication. Contact her at [email protected] | @digitalamysw