Beyond Self-Regulation: Creating a National Coalition on Ethics 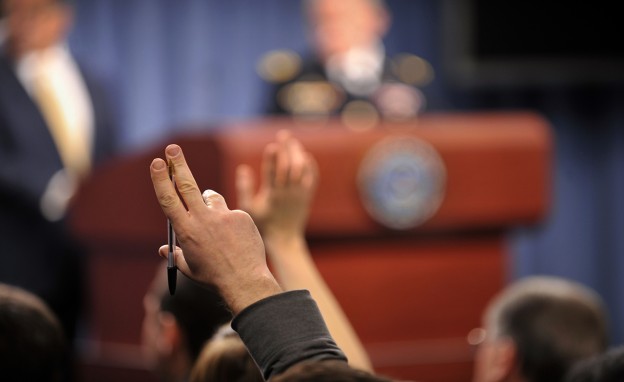 Photo by Ash Carter on Flickr and used here with Creative Commons license.

How does a society deal with what it considers to be unethical use of the freedom to publish?

Dictators imprison journalists. Democracies use a mix of legal and non-legal mechanisms, from libel laws to press councils.

"We need a society-wide notion of media responsibility. Moreover, we need new public structures that allow society as a whole to discuss, monitor and criticize the ethics of journalism practice."

In the United States, journalists have long countered calls for greater legal regulation by appealing to an ethical ideal — the “self-regulation” of the press.

The idea, on the face of it, is simple. Like other professions, journalists would follow and enforce their own norms of conduct, rather than place it in the hands of government agencies.

For those who hope that self-regulation is still a valid idea, I have bad news from the expanding frontiers of today’s digital journalism.

Self-regulation is no longer a clear and coherent ethical ideal. The problem is not the old objection that self-regulation struggles in practice. Yes, too many news outlets ignore ethical standards with little consequence.

Photo by Nick Olejniczak on Flickr and used here with Creative Commons license.

As a free press supporter, I worry about this decline in the ideal.

It leaves room for demagogues to argue that, if self-regulation is a myth, the only alternative is greater legal and social regulation of the news media.

Therefore, I propose that we get to work to construct a new idea for supporting standards. We need a society-wide notion of media responsibility. Moreover, we need new public structures that allow society as a whole to discuss, monitor and criticize the ethics of journalism practice.

I call for the creation of what I call the National Coalition for Media Standards.

The coalition would be a new way of “doing” journalism ethics in the public sphere, adjusted to new media. It would include the public as an important part of the ethics process.

Let me explain, starting with why self-regulation is an idea collapsing from within.

Journalism self-regulation and ethics were born together, as ethical twins, in the early 1900s, as journalists created professional associations with codes of ethics. For the first time, journalists espoused a collective responsibility for the practice and sought common standards.

Journalists made a group commitment to serve the public good. They articulated that responsibility in terms of the now familiar principles of truth-telling, objectivity, separation of news and opinion, and editorial independence.

They also talked about their professionalism and their codes of ethics as sufficient to regulate their conduct. Who watches the watchdog? The watchdog itself.

It is no accident that professional ethics and self-regulation were linked so closely.

Both developments were a response to a rising public worry about the power of the new mass commercial press. Like today, the public accused journalists of being sensational, inaccurate and biased, and advancing their own interests first.

This public decline in confidence, combined with wartime calls for censorship, prompted governments of the era to threaten legal restrictions on professional media practitioners, including film producers and advertisers.

Self-regulation was journalism’s rhetorical response to threats against its freedom and lagging public support. In practice, the idea proved to be imperfect. Many news outlets ignored codes of ethics or rejected group mechanisms such as press councils. Public confidence declined as media scandals mounted and the influence of power and business on media grew.

The idea of self-regulation entails the following three conditions: (1) an ability to clearly recognize who is a journalist, i.e., who is a member of the profession; (2) a willingness among group members to self-regulate; (3) and substantial agreement on principles for critiquing conduct.

By the turn of this century, the technology-driven media revolution, with its democratization of media, began to undermine all three conditions.

Second, presume that we can find a way to define “journalist” to include most professional and nonprofessional practitioners. Would sufficient numbers of this amorphous group be willing to come together to practice self-regulation? Is the idea of “collective responsibility” viable in today’s chaotic media universe?

Third, we lack widespread agreement on the norms that would guide self-regulation across multiple media platforms. What code should be adopted? Almost every principle of professional self-regulation, from objectivity to impartiality, is in question.

Photo by Ernst Moeksis on Flickr and used here with Creative Commons license.

I suggest we start by formulating a new idea to replace self-regulation.

First, we eliminate the term “regulation.” The term is misleading because it suggests that we have legal mechanisms in mind. Second, we eliminate the “self” in “self-regulation” which refers to professional journalists and replace it with a process that includes citizens.

Self-regulation in journalism has been a closed, inward-looking approach to ethics. It presumes that ethics belongs to journalists. They create the codes; they enforce them.

But the responsibility for good journalism is a collective responsibility of all of society. Citizens, social groups and citizen journalists should be an intrinsic part of the nationwide process for supporting media standards.

Journalism ethics starts with asking what sorts of media our democracy needs. When it comes to this question, we all have a deep interest.

So the question becomes: How do we create an open process? What public institutions might realize this ideal?

I propose that movers and shakers in the media world form a National Coalition for Media Standards. The coalition would unite journalists and non-journalists in analyzing and supporting standards across all forms of journalism.

I see the coalition as the hub of a wheel where the spokes link to media agencies, societies and individuals that care about democratic media. It would not replace existing agencies. It would be a “meta” organization that coordinates activity and partners with groups.

The coalition would have an office at a center for ethics, say at a university. It would be funded by major foundations, partners, journalism associations and philanthropic individuals.

What would be the main activities of the coalition?

First, study the health of the media system at large and trends in media ethics, culminating in annual high-profile reports on the state of media ethics.

Third, assist in reconstructing ethics for digital news media. Among the first projects would be addressing the questions raised above – who is a journalist and what common standards might unite journalists across platforms?

Fourth, take on a public education mission. Convene workshops and conferences, publish guidelines and teaching modules, and engage the public in addressing issues.

All of us can think of obstacles to the creation of this coalition, or a similar agency. I am acutely aware of these lurking complexities. Yet we have to start fundamental reform of journalism ethics from somewhere.

What is important is that people who care about responsible journalism imagine – and then create – a new way to deal with the difficult and new ethical issues of communication in a media-lined world.

Self-regulation within a profession is dead. Long live society-wide engagement.