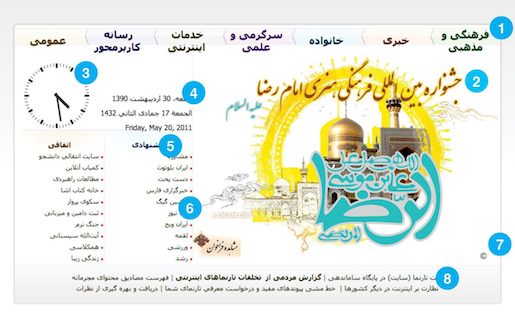 Iran's peyvandha.ir — a place where Iranian Internet users are given a pre-selected set of options for sites to visit -- has gone through several iterations. This is how it looked in 2011 during its fourth iteration. Image courtesy of Global Voices.

“The Internet environment is like a raging river full of water, and the water keeps on brimming and roaring. If we devise a plan for this river, and can direct it as we wish to a dam, we can create opportunities out of it. But if we leave it, and do not devise plans for it, then it will become a threat.” (Iran’s Ayatollah Ali Khamenei in Fars News, 2012)

Imagine you are in Iran and trying to access www.bbc.co.uk, a website blocked by Iranian authorities. You open up your browser and then search for the URL. But instead of being taken to the BBC’s website, you arrive at a screen that looks something like this:

"The changes in the page demonstrate the evolution of how Iranian state has represented its censorship policies. This page serves as one reflection of state policies regarding online expression in the age of President Hassan Rouhani."

This page, known as “M5-8,” informs the user that “access to the requested website is not possible. For complaints click here.” M5-8, which is hosted on the country’s national network and is thus inaccessible outside Iran, offers a list of links to categories listed under “culture and religion,” “society,” “Internet services,” “science and education,” “news and media” and “electronic government.”

After about 30 seconds, the website redirects to www.peyvandha.ir, a government-administered website full of alternative links for browsing the net, as well as literature related to Iran’s Internet policy (“peyvandha” means “links” in Persian).

Peyvandha.ir harkens back to the era of the web directory. The directory was a popular tool in the early ’90s, used by Yahoo and the Open Directory Project, before the rise of search engines led to a reliance on algorithmic page ranking for websites.

Asserting Control Through the Web Directory

In the Islamic Republic of Iran, the directory still exists in the form of peyvandha.ir — a place where Iranian Internet users are given a pre-selected set of options for sites to visit. But despite the technical limitations it represents, peyvandha.ir can be a useful tool for researchers — it provides a window into the thinking behind state information control and the broader political goals that this seeks to accomplish.

After the contested 2009 presidential elections and subsequent social unrest, Internet controls were heightened inside Iran. Iran’s Cyber Crime Law was developed and implemented, giving rise to the CCDOC, the centralized censorship body affiliated with the Ministry of Justice. Peyvandha.ir came into existence the following year.

Peyvandha.ir has undergone six major updates since it was first created. These updates are not merely technical — they reflect the evolution of web design from the Iranian state, illustrating how Iran represents itself through online interfaces. They can also help us better understand censorship within Iran on the whole. Using screen captures from the Internet Archive’s Wayback Machine, we were able to trace and reflect on the evolution of peyvandha.ir over time.

The Evolving Narrative of the Internet

Each version of peyvandha.ir has included literature related to Iran’s Cyber Laws — these have evolved as norms on what constitutes filtered content have become more entrenched within Iran.

The first version of  peyvandha.ir redirected users to a new page and then told them, “In the Name of God, according to the Computer Crimes Act, access to this website requested is not possible.”

While earlier versions of the page prominently featured nationalistic and religious elements, more recent designs are sleek and more subtle about the censorship they represent.

In the second version, users were simply told that the links they were viewing were “some of the registered links.” Within version 2 we also saw the peyvandha.ir website creating pages related to Internet policy, now located at the bottom of the page (in element 4 below):

Version 3 continued with the theme of religious references, with a poem featured that states, “If you listen to the words of the poet Saadi, he says he consents to require the consent of Him” (element 2). Immediately to the right of this, users see the text “in the name of God the merciful” (element 1), as if to imply that these pages are being censored at the will of God.

These religious references continued in version 4, whereby the main feature of the page was a changing image that made reference to national holidays and events, maintaining the theme of allusions to Shia Islam and National Imams. The first image (seen below) depicts a mosque, marking the festival of Imam Reza, asking users to click on a link to submit ideas for the festival. Instead of the categories and the subcategories that are featured in previous versions, there are links featured as “suggestions” and “accidental” links.

Version 5 brought attention to the “Islamic nature” of censorship and the theological regime behind it. The links featured on this page are much more in keeping with state propaganda than other versions. The page features many links to websites about the martyred soldiers of the Iran-Iraq war, as well as websites that feature reviews of American video games, entitled “Reviews of Satan’s Games.”

While version 4 did not display any links, all previous versions of peyvandha.ir featured the popular Persian language blogging platform Blogfa. But version 5 omits the platform altogether. Sources responsible for the design of this page tell us this is because founder Alireza Shirazi asked for the website to be removed from the list. The six links related to Internet policy and contact information for site administrators are still located at the bottom.

The last two iterations of the website in version 6 and 7 are very similar in design. According to an anonymous source involved in the site’s development, the sudden change was intended “to make filtering more pleasant,” or rather, to appear as a subtle part of the Iranian Internet experience — instead of one presented with indoctrinating aspects of the government.

The significant change that comes in version 7 is the prominent feature of the Internet policy links in element 2:

The following is a video narration of how peyvandha.ir has morphed throughout the years.

The changes in the page demonstrate the evolution of how Iranian state has represented its censorship policies. This page serves as one reflection of state policies regarding online expression in the age of President Hassan Rouhani. Rhetoric, words and the actions of Iran’s leaders now often seem liberal — Rouhani’s support of a free Internet, and the active presence of his cabinet on the blocked platforms of Facebook and Twitter — but bloggers still face arrest, and platforms continue to be blocked.

Written by Mahsa Alimardani and Auke Rick Akkerman for the Masters in New Media and Digital Culture at the University of Amsterdam’s Digital Method Initiative.

This piece originally appeared on Global Voices Advocacy and is republished here under Creative Commons license.

6 responses to “The Story Behind Iran’s Censorship Redirect Page”