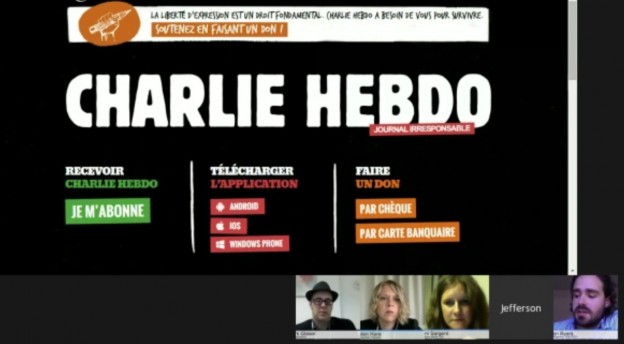 The Mediatwits discuss the future of Charlie Hebdo after the Paris attacks.

Following the violent attack on Charlie Hebdo, a satirical French weekly that published cartoons of the Prophet Mohammed, media organizations had to decide whether or not to publish sensitive materials related to the attack — especially when the new issue of the magazine came out with yet another cartoon on the cover. The AP, CNN, ABC and NY Times are among some of the media outlets that wouldn’t run the cartoons. But that wasn’t the only ethics debate concerning Charlie Hebdo. After the attacks in Paris, amateur video showing the murder of a police officer appeared online. The video quickly went viral. But in an interview with the AP, the man who shot the video, Jordi Mir, said he regretted uploading it to Facebook. Should organizations think twice about publishing cartoons of the Prophet Mohammad? We’ll try to untangle these issues with Kristen Hare at the Poynter Institute; Jenni Sargent, director of Eyewitness Media Hub; and Dylan Byers, media reporter at Politico. PBS MediaShift’s Mark Glaser will host and Jefferson Yen will be producing.

"I don't think news organizations have an obligation to show the [recent Charlie Hebdo cover], but I think they should admit they are making an exception here." -Dylan Byers

Kristen Hare is a media reporter for the Poynter Institute in St. Petersburg, Florida, and she writes Poynter’s morning media newsletter. She previously worked as a reporter at the St. Louis Beacon, covering immigration, race and the census, and the St. Joseph News-Press, where she was an enterprise features reporter. Kristen also spent two years in Guyana, South America, with the Peace Corps.  You can find her on Twitter @KristenHare

Dylan Byers is a media reporter at POLITICO and the author of the On Media blog. He was previously a media and tech reporter at Adweek, and has served as a research assistant to Philip Gourevitch, George Packer, and Jane Kramer. He graduated from Bard College in 2008. Follow him @DylanByers

Jenni Sargent is a director of Eyewitness Media Hub. She specialises in creating bespoke online training for media organisations and NGOs and is working to develop a library of free digital resources to address the logistical, ethical and legal issues surrounding eyewitness media. Find her @JenniSarge

The decision by some media organizations to censor depictions of the Prophet has not sat well with some. Actress Mia Farrow slammed TV stations for not showing images of the new Charlie Hebdo cover. But Stephen Pollard, the editor of the UK’s Jewish Chronicle, defended his position in a tweet: “Every principle I hold tells me to print them. But what right do I have to risk the lives of my staff to make a point?” Not everyone agreed with this line of thinking.  Viewpoints editor Mike Drago at the Dallas Morning News explained that their decision to run the covers was a small gesture “…compared with the courage of those who died…” There was a third approach, commentators like Jordan Weissmann at Slate, and Maria Bustillos at Gawker condemned the attack and characterized the cartoons as racist or xenophobic but were ultimately in favor of free speech.

The attack on Charlie Hebdo and the following discussion on freedom of expression is the most recent example of tensions over the depictions of the Prophet Mohammed. In 2005, Danish newspaper Jyllands-Posten outraged many when it published a series of illustrations depicting Mohammed. In 2007, Swedish artist Lars Vilks was the center of another controversy after his depiction of Mohammed as a dog was published in the Nerikes Allehanda newspaper. In 2011, Charlie Hebdo was firebombed after the publication named the Prophet the “editor-in-chief” of an issue which depicted two men kissing on the cover.

In what contexts is posting the cartoons acceptable online and in print and broadcast? How should journalists approach the publication of sensitive materials? Where is the balance for free speech and offensive or hate speech?