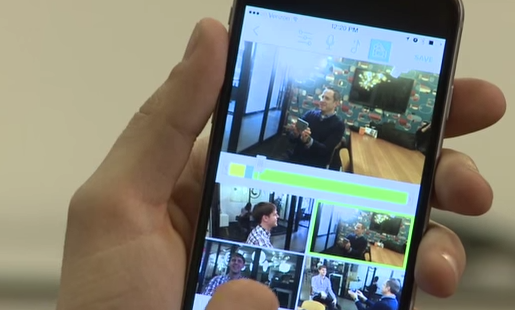 Fly Labs helps you edit multi-angle videos by sending them to a single device and synchronizing them using a timestamp. Then you can direct how to cut and edit the video like a TV producer with the sound of your voice. Screenshot courtesy of RJI.

This week we look at a pair of mobile video apps with a streamlined interface and a micropayment system for news content that is already up and running in the Netherlands.

"There is no other company like Blendle, but our biggest competitor is when a newspaper puts stuff for free online, without a paywall." -- Thomas Smolders, international strategist, Blendle

While most mobile video editing tools mimic desktop editing software, a startup called Fly Labs recently released two video apps — Fly and Clips — whose interfaces are more like a typical iPhone app. Their goal is to make creating video with a smartphone easy enough for anyone. We visit with founder and Chief Executive Officer Tim Novikoff and get a look at the apps in action.
Reporting by Reuben Stern and Rachel Wise.
[To skip directly to this segment in YouTube, click here.]

In this clip, Fly Labs CEO Tim Novikoff introduces his staff and gives a tour of the startup’s office in downtown Manhattan. To make this video, Novikoff first recorded his stand-up narration using the app. He then recorded b-roll while his stand-up footage played in a small window onscreen, using the pause button to stop the recording as he reframed each shot. The app then enabled him to select how to cut between the two pieces of footage. The whole thing was produced in about five minutes. This functionality of the app is mostly suited to situations where the activity is ongoing and can be captured in video after the reporter has already described it.

This clip shows a portion of our interview with Fly Labs CEO Tim Novikoff captured through Fly’s multiple-angle video feature. This set-up included four iPhones with the app installed on each. Once all the phones were synched up via the app, one user controlled the start/stop of the simultaneous recording. When the recording was finished, all the footage was automatically synched up and could be accessed and edited from any of the four phones.

For a tip sheet of other useful mobile video tools, check out RJI’s “7 most useful apps for mobile journalism.”

A platform called Blendle allows readers in the Netherlands to pick and choose which articles they’ll pay to read — and to skip articles they aren’t interested in — from a wide range of the country’s major newspapers and magazines. We find out how the team made it all work.
Reporting by Katy Mersmann.
[To skip directly to this segment in YouTube, click here.]

The Economist reports that the idea for Blendle came from a co-founder’s experience at a grocery store checkout line, where he was enticed by an article in a women’s fashion magazine but found it it “too embarrassing” to buy a copy of the publication. The article goes on to explain that the Netherlands provides an optimum laboratory for this kind of technology.

Blendle plans to expand into other countries thanks to a $3.8 million investment from The New York Times and Axel Springer.