6 Tips About Students for Professionals Entering a Classroom 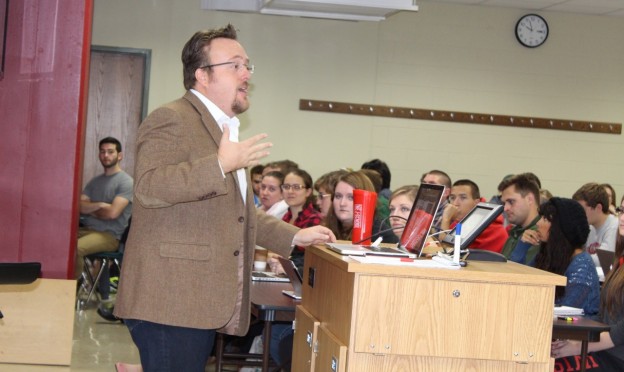 My colleague Mike Wagner is particularly adept at understanding and guiding his students, known in his classes as "young scholars." (Photo courtesy of Mallory Perryman)

When I was hired at the University of Wisconsin-Madison to develop an intense (or perhaps insane) six-credit multimedia bootcamp course, I asked my husband to proof my syllabus before I had it copied. It laid out a semester’s worth of breakneck pace, challenging assignments and high expectations.

"I'm a big believer in taking risks and experimenting, so I was thoroughly unprepared for students who were crazy cautious because they didn't want to risk getting anything less than an A."

Knowing me well from my days as his girlfriend when we were undergrads, he concluded his copy edit with one sage insight for me. “You know,” he said, waving the syllabus slowly at me. “You would have dropped a course like this.”

Thus began my run as a “do as I say, not as I did” college professor.

For the last week, EducationShift has been sharing insights from people who have made the jump from newsroom to classroom. Some of you are teaching for the first time. Some are mentoring other novice educators. And I suspect some are students, wanting to check out whether we really care. In my decade-and-a-half of teaching, I’ve learned some important things about students that you might not suspect when you first step into the front of that lecture hall or lab.

1. They don’t listen, but that doesn’t mean they don’t care.
You can say it in a lecture, put it on a schedule and remind about it in an email. But some subset of your class will miss it. Part of this is the age. As the mother of teenagers, I’m acutely aware of youth-related deafness. But I’m coming to believe an even larger part is distraction. My messages to students arrive against great competition. Smartphones, Facebook, other classes, internships and dating all wrestling their time away from our work together.

I’ve long been a believer that I shouldn’t shut down technology in the classroom. They have to learn to manage these device distractions, we can use them for some assignments, and, my favorite yarn, if they’re on Facebook rather than listening, it’s their own money they’re wasting and ignorance they’re ensuring. (One of my colleagues says college students are “the only consumer group in history that actively tries to get less than it paid for.”)

But my mind is changing. This brilliant argument by Clay Shirky sums up some of the reasons. I now see myself as more of a guide for my students. We employ technology selectively when it’s productive. And I remember that I need to help my messages sink in while teaching them that the working world will be a whole lot harder on them when they don’t pay attention.

2. Forget the “digital natives” moniker. These students don’t know much about using the tools in front of them.
Just because you grew up on Facebook doesn’t mean you know how to use Facebook to find sources, search for information or engage with audiences. These are all insights and skills students can and should gain in J-School classes. I also find students need help organizing their digital lives. I once had a student stop in to troubleshoot a project, and we began looking for her files. I saw that the desktop on her laptop was completely covered in file icons. Not one pixel of desktop was visible, and she had never created a single folder. Think about starting the semester teaching them how to get organized and offering a pro tip on productivity at the start of each class.
3. Kids today are under far more pressure than I ever was when I rode my dinosaur to J-School.
This doesn’t apply to every student, certainly, but far more than I would have imagined. For some in our classrooms, failure simply is not an option. I lay some blame at the feet of the hyper-competitive race to get into good colleges and some at our collective emphasis on over-credentialing. It’s not enough for some kids to be a starting soccer forward. That have to also be in National Honor Society and final in forensics. All this while winning a volunteerism award. This puts enormous pressure on the narrow shoulders of young adults.

Anyone walking into a college classroom today has a duty to recognize the impact of stress and develop an eye for students in crisis. Find university resources before you need them, so you’re prepared when problems arise. My university has developed important efforts, and you can find similar programs on your campus. Stress, anxiety and depression are real issues before you. Be ready for them.
4. Smart is great, but it’s the hard workers who soar.
It takes mere moments to separate the book smart from the street smart in your classes. Both have a place. But students who have long been rewarded for good grades often need help recognizing that it’s time for sweat and savvy in addition to smarts.

I’m a big believer in taking risks and experimenting, so I was thoroughly unprepared for students who were crazy cautious because they didn’t want to risk getting anything less than an A. You have to make your classroom a safe place to try and fail. And you have to constantly emphasize the rewards of hard work over the benefits of natural gifts. Think I’m nuts? Check out this summary of three decades of research backing the idea that a mindset focused on effective processes and efforts is more powerful than one focused on innate intelligence.

5. They need a civics sherpa.
I don’t like it when I hang out with other educators and they carp about how little their students know about how city or state government works. I was the exact same way. In fact, I remember being 23, taking my first job as a crime reporter and having an assistant district attorney slam the Illinois Criminal Code on the desk when I asked how a grand jury worked.

We’ve all been 20. And when we were, we didn’t know jack about bond issues, policing strategy or the electoral college. I suspect this is because we weren’t paying taxes then.

So don’t assume that your students understand the world around them and refer to items 1 and 3 to understand why they might not ask when they don’t. It’s a lot we’re teaching them — writing, editing and producing alongside effects, professionalism and ethics. But we’re also helping them develop as citizens — to learn the difference between a misdemeanor and a felony and think about the social impact of imprisoning people. It’s a hefty thing we ask of teachers.

6. Lose the Moses Complex.
That brings me to my most important point. We do ask a lot of teachers. And to me, it’s too big a burden to bear alone. I encourage all new teachers to forget the idea that you’re the expert and they’re the novices. You’re not Moses descending the mountain with the commandments of journalism etched on a tablet.

You’ll be more successful — as will your students — if you see teaching as a collaboration. Admit when you don’t know the answer and seek it together. Teach them to look for answers before asking you. Make it a partnership. This will make you more confident and well-rounded. And it will instill in them the habits they’ll need when they leave you.

Good luck as you take on the best job I’ve ever had.