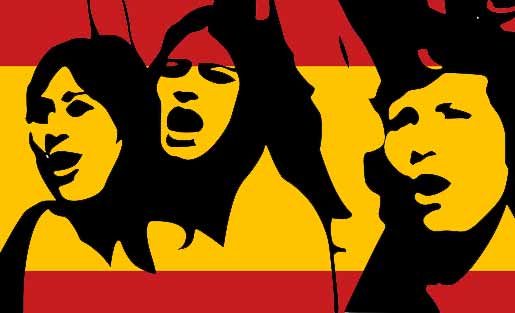 Spain’s proposed new public security law, Ley De Seguridad Ciudadana, also known as the Ley Mordaza (Gag Law), has many journalists, human rights defenders, and citizens deeply concerned about what the future of freedom of expression and human rights will look like in the Iberian country. The bill passed the lower house of the Spanish parliament this past Thursday, and is set to be approved by the Senate in February 2015.

Many describe the law as an attempt to stomp out social movements and their coverage. Concerned parties also report that it will give overwhelming power to law enforcement. In addition, according to Amnesty International spokesperson Maria Serrano, the law deprives migrants of the right to asylum and their guarantee to a right to counsel and effective remedy.

"Many describe the law as an attempt to stomp out social movements and their coverage."

El Pais reports that 82% of citizens wanted to change or kill the bill.

limiting the right to protest and more

Under the new law, the following actions will be heavily fined up to 30,000 Euros. If citizens want to appeal the fines, they will have to pay judicial costs.

power to the authorities

In addition, and most troubling for many, the following power has been given to law authorities:

A recent amendment to the bill would also make it legal for Spanish authorities to immediately deport immigrants, without giving them opportunity for asylum.

The bill comes at the heel of a restrictive copyright law, which comes in effect in January, and among other things, has led to a Google News shutdown in Spain.

In March of 2014, Spanish police attacked and injured seven journalists who were attempting to cover a violent arrest during a demonstration in Madrid. Throughout the year, other journalists have reported being prevented by law enforcement from taking photographs and gathering information during protests, and experiencing verbal and physical abuse.

Earlier this month, journalists at Spain’s state broadcaster RTVE started a sit-in to protest the arrival of the new heads of news, Jose Antonio Alvarez Gudin, who was previously at the right-wing daily newspaper La Razon. The journalists believe that Prime Minister Mariano Rajoy’s government is trying to tighten its control of the network ahead of 2015 legislative and local elections. Two of the country’s biggest unions, Commissioners Obrerars and the General Workers Union, have publicly stated that they feared the government was trying exercise greater control in an attempt to manipulate the news.

The decline of press freedom in Spain has been attributed to the European economic crisis which has led to measures that critics claim are aimed at making the media docile and servile.  The 2013 Freedom House report noted increased self-censoring in the Spanish journalism world and a drop in quality reporting. The same report cites a 2013 survey of 1,700 Spanish journalists where 80% of respondents said they had been pressured into changing or removing content.

Attacks of press are troubling in Spain, which traditionally has been seen as an example of success for having come out of the Franco dictatorship to join the group of West European democracies.  The upcoming 2015 general elections may further test the social climate, and the role of the press in Spain.

Sandra Ordonez is Outreach Manager for the Open Technology Institute. She provides organizations with collaborative management, digital strategy and community management services. She has conducted over 400 expert interviews on the future of journalism.