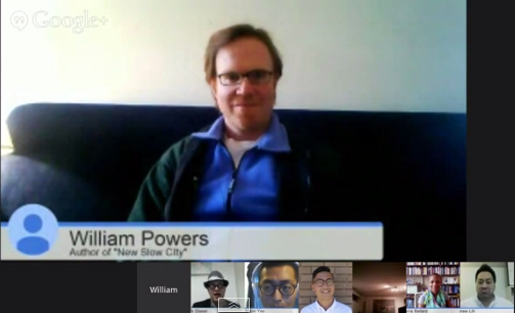 The holidays are upon us and you’ve probably done your fair share of running around. But can you truly get away from the office? Laptops, tablets and cellphones have made working on-the-go that much easier. Sometimes bringing all of your devices with you can feel like a necessity even after you clock out. According to a Gallup poll, workers who say they check their emails frequently report they spend roughly 10 hours a week working remotely. You’re not the only one who’s felt like technology has helped work encroach on personal time. The non-profit Reboot Network has been promoting a National Day of Unplugging for five years now. In his latest book, “New Slow City,” William Powers describes what happens when you reject that mindset and decide to live slowly. On this week’s show we’ll be speaking with Powers about his new book; Dawna Ballard, an associate professor at University of Texas at Austin; Geir Berthelsen, founder of The World Institute of Slowness; along with regular guest Andrew Lih from American University. PBS MediaShift’s Mark Glaser will be hosting and Jefferson Yen will be producing.

Dawna Ballard (Ph.D., University of California at Santa Barbara, 2002) is an expert in chronemics–the study of time as it is bound to human communication.  She researches what drives our pace of life and its impact on the communication practices of organizations, communities, and individuals.  This includes studies on attention management, multitasking, communication overload, social media use, sustainable career practices, mobile communication technologies (including mobile wallet use), and trade-offs between convenience and security.

Geir Berthelsen founded The World Institute of Slowness, a Think Tank in 1999. He has experience of change management and problem solving, for small and large corporations across the globe, for over 20 years. Geir has a background as a physicist and an M.A in industrial organisational psychology. His favorite challenges are around tackling today’s ”fire fighting culture”and corporate mindsets that are ”long on quantity and short on quality”. Geir takes pleasure in demonstrating that the best thinking often comes from a walk in the “slow lane”.

Born and raised on Long Island, William Powers has worked for over a decade in development aid and conservation in Latin America, Africa, Native North America, and Washington, DC. He is a senior fellow at the World Policy Institute and is on the adjunct faculty of New York University. A third generation New Yorker, Powers has also spent two decades exploring the American culture-of-speed and its alternatives in some fifty countries around the world. He has covered the subject in his four books and written about it in the Washington Post and the Atlantic. An expert on sustainable development, he is a freelance writer and speaker. More information on his work can be found here.

The “slow movement” advocates, as you might have guessed, slowing down. Its proponents argue that we should try to do things better instead of trying to do things faster. Most people are familiar with the term “slow food,” which was started in 1986 and promotes preserving local culture in the face of globalization. “Slow food” was created when Italian journalist Carlo Petrini organized a rally to protest the opening of a McDonald’s franchise next to the Spanish Steps in Rome. There are now 150,000 members across 150 countries. The slow movement has grown from its initial focus on food to include other areas of life such as: art, design, city planning, and yes, even technology. Geir Berthelsen started The World Institute of Slowness in 1999.  The think tank wants to bring the message of slowing down to all aspects of your life. They even have a brand with products like SlowCoffee.

As a whole, Americans are working less than they were 50 years ago. It’s only when you look at those with higher education, that you find people have less leisure time. You can get a sense of how these ideas are resonating by taking a look at the National Day of Unplugging, which is in its fifth year now. For 24 hours, participants refrain from using technology. Not everyone is enamored of this idea. But for Dawna Ballard at the University of Texas, the reason why we find ourselves in this situation is because our culture values speed and connectivity. Our behaviors drive the technology — not the other way around.

In the New Yorker, Casey N. Cep writes, “Few who unplug really want to surrender their citizenship in the land of technology; they simply want to travel outside it on temporary visas.”  Do you participate in any of the “slow” movements? How have they impacted your life? Would you unplug from your mobile devices for a day? How do you feel about your work-life balance? Do you think this is a feasible solution for your?

One response to “Mediatwits #139: Finding Work-Life Balance with Technology in the ‘New Slow City’”