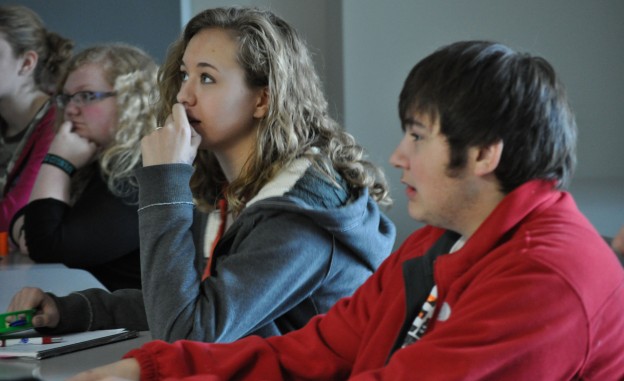 Journalism teachers are finding what they teach their students in the classroom or while working on student media aligns well with Common Core State Standards. Photo courtesy of Ohio Scholastic Media Association.

When Common Core State Standards appeared in 2010, after more than two years of development, high school journalism teachers weren’t sure what to think.
"From an emphasis on non-fiction to a need for research and synthesis of multiple sources to support for critical thinking and collaboration, journalism students can benefit from this current educational trend."

On one hand, those CCSS English Language Arts college- and career-readiness standards sounded a lot like what they were doing already. For instance, Grades 6-12 — Text types & purposes includes the statement that students should “write informative/explanatory texts to examine and convey complex ideas and information clearly and accurately through the effective selection, organization, and analysis of content.” That sounds just like in-depth news or feature writing.

THAT’S WHAT WE DO IN JOURNALISM

Other standards describe perfectly what goes on in a journalism classroom or on student media. When it comes to production and distribution of writing, journalism seems much better suited to coping with different audiences and purposes (CCSS.ELA-Literacy.CCRA.W.4). Isn’t the audience for most English-class writing pretty much the teacher — and the purpose is to impress her and get an A?

Such similarities are apparent through standards about using technology, gathering multiple credible sources, revising and editing. It all sounds perfect. Even David Coleman, one of the authors of the Common Core State Standards, is often quoted as saying a student must “read like a detective and write like an investigative reporter.”

But not every administrator sees journalism as the new English, so once the standards were in place in many states, journalism educators had to start building their case. Some districts began insisting all English and language arts curriculum must align with CCSS, so the race was on. Could journalism educators quickly and effectively show the natural connection to their discipline?

A group of Michigan advisers, some of them officers in Michigan Interscholastic Press Association (MIPA), began the work in 2011 when they first heard from members that “administrators were talking about dropping journalism courses because they didn’t meet Common Core. We knew that some programs would need this alignment to save their courses and possibly get publications courses to count as English credit,” Julia Satterthwaite, a journalism teacher in Rochester Hills, Mich., said in an email.

Rod started the process by creating a wiki so they could collaborate, though they were able to get together a few times, once for a six-hour marathon.

“The people who were on this curriculum committee were extremely busy — balancing teaching and advising publications, or beating cancer, or wedding planning or having two babies 14 months apart — getting everyone together to work on this was difficult,” Satterthwaite said.

She describes realigning curriculum as “an arduous process,” made more difficult by the strange and difficult phrasing of the standards. The wiki they compiled isn’t easy to navigate, she admits, but her group received input from 15 to 20 teachers and added almost 120 documents. Some were using the wiki to show their administrators how “journalism courses meet the standards more closely than even English courses,” she said.

Meanwhile, at the national level, the Journalism Education Association, the largest organization in the country for secondary school journalism teachers and student media advisers, also saw course alignment as the way to demonstrate the natural connection between journalism and CCSS.

In May 2013, 14 members of the organization, each chosen for an area of expertise, began developing a comprehensive curriculum initiative that includes lesson plans, activities, slideshows, rubrics and assessments in separate media-related content areas. This was rolled out in April 2014, though it is accessible only to JEA members behind a password-protected wall.

Because showing the alignment throughout the curriculum may help journalism programs stay afloat, tying their work to the standard was a “no brainer,” Nichols said.

“Veteran teachers know how the content naturally aligns (with CCSS), but they don’t have time to demonstrate that alignment,” she said. “New teachers are just overwhelmed by everything they have to do, so this will help keep them in the classroom.”

For instance, in the curriculum a news writing lesson covers basic 5W’s and H summary leads and aligns with five different CCSS standards, including one about gathering “relevant information from multiple authoritative print and digital sources. . .”

Journalism also fits well with the Partnership for 21st Century Skills, a coalition of business, education and government leaders who want to ensure readiness for all students entering the real world, not simply preparing them to take tests. P-21 emphasizes the 4C’s, which include critical thinking and problem solving; communication; collaboration; and creativity and innovation. These alignments, too, are included in JEA’s curriculum.

Students who take ownership of their newspaper or broadcast outlet are solving problems daily, real-world ones they won’t find on tests about interviewing difficult sources and raising money to buy better equipment. They communicate with each other and with their various audiences, collaborate to produce writing, video, art and photos that show their creativity.

Journalism teachers may have been concerned when CCSS first appeared that this would be one more way to cut back on “frills” like journalism. But logic told them this doesn’t have to happen, and the hard work of some educators has led to lessons that support their belief.

From an emphasis on non-fiction to a need for research and synthesis of multiple sources to support for critical thinking and collaboration, journalism students can benefit from this current educational trend.

“A great journalism kid is the poster child for the success of the Common Core State Standards,” Julia Satterthwaite said, as she and others work to show how that is true.

The video above was a collaboration between students and advisers from Journalism Education Association schools across the country. The goal was to capture students’ thoughts and ideas from varied journalism backgrounds and experiences. An idea of JEA President Mark Newton, it was designed to share with others why journalism is perfectly aligned with the 4C’s, which is embedded within the common core standards: critical thinking, communication, collaboration, and creativity. Advisers Aaron Manfull, Michael Hernandez, Matt Rasgorshek and Don Goble put the video together.

Candace Perkins Bowen (@candacepb) is an associate professor in the School of Journalism and Mass Communication at Kent State University and director of the Center for Scholastic Journalism. Her research interests include student free speech rights and pedagogy that supports high school media teachers.

One response to “Journalism May Be Common Core’s New English”