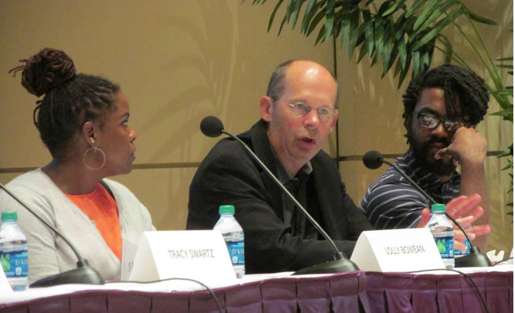 Last week, PBS MediaShift and the Poynter Institute produced a great symposium, “Truth & Trust in the 21st Century: Journalism’s Role in Telling the Story of Violence in Chicago.” The event was sponsored by Northwestern University’s Medill School of Journalism, the Robert R. McCormick Foundation, the Gannett Foundation and PR Newswire. It featured a conversation about how journalists can best cover violence in a way that empowers and informs communities.

"It's [a journalist's] job to get people to listen to stories that are sometimes difficult." -Alex Kotlowitz

We’ve rounded up a great collection of photos, coverage and a Storify from the Truth & Trust symposium. Did we miss anything? Please add it in the comments, and we’ll update the post. We also expect to have video from the event soon.

Colleen Connolly shot some great photos of the reception and the symposium.

Map for Navigating Society Should be More than Good Story, by Barbara Iverson, Chicago Talks

Truth and Trust: not as easy as it sounds, by Kari Lydersen, Social Justice News Nexus

Crime coverage in Chicago may be too good, by Kari Lydersen, Poynter

See below for our own curated collection from Truth & Trust.

Angela Washeck is a freelance writer and editor based in Dallas. She is a proud graduate of Texas A&M University, where she earned a Bachelor of Arts in Communication with a journalism minor. Angela also writes for MediaBistro’s 10,000 Words blog and TexasMonthly.com, and she once interned with the TV news magazine “Dan Rather Reports.” Her work has been republished on Editor & Publisher, the American Press Institute and more. When Angela is not busy with PBS MediaShift work, you can find her watching “How I Met Your Mother” reruns, watching Aggie football and attending indie/folk concerts in Dallas. Follow her @angelawasheck.