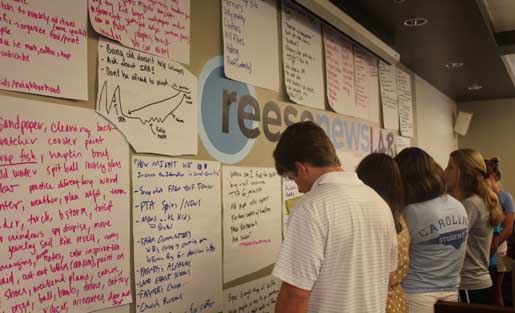 Uncertainty. Some people thrive on it while others others run from it. Our goal in the first two weeks of the Reese News Lab program is to get students to accept it.

"How do we prepare students to face uncertainty? We start by giving them lots of structure."

Associate Director Sara Peach and I spend most of our pre-semester planning time setting up the first week to help students face uncertainty. It’s not about risk and it’s not telling students “It’s OK to fail.” (It’s not OK to fail, but that’s a subject for later.) Students in the Lab will only succeed if they learn to solve their own problems. From the beginning, we are clear that we do not have the answers. It’s up to them.

As documented and explained during orientation, students must be prepared to:

So how do we prepare students to face uncertainty? We start by giving them lots of structure.

First days in the Lab

The first visual representation of uncertainty are bare walls. The Lab is clean, almost sterile, and I don’t like it. But it catches many students by surprise because it’s likely the first time they see the Lab in that state. The bare walls are unexpected and jarring.

According to the students, the first several days in the Lab are unnerving. Most are uncertain about what to do next or how they will come up with an idea for a media product. Interestingly enough, some describe it as a free-for-all with very little, if any, structure. Veteran students voluntarily explain to others that being here previously doesn’t provide any advantage.

We don’t present our preconceived ideas or assumptions, and we don’t allow student to, either. We give students specific problems (we call them challenges) in the form of a simple question. For example, one of our current challenges, “How might we meet the information needs of communities?” is based off the FCC’s 2011 report, “Information Needs of Communities.”

We conduct structured brainstorm in groups and require students attendance at least two of the four sessions throughout the week. Many students choose to participate in more than two. The group setting with Sara or me leading provides just the right amount of structure to keep things moving.

Uncertainty climbs even as we plaster bare walls with ideas. Forming teams around the best ideas is the trickiest part during the first week. The students know a poorly-matched team will result in a terrible experience for them and a horrible experiment for the lab. Many students shun group work in school because of past experiences.

The way we create (hopefully) well-functioning teams is that Sara and I assign students to specific groups. Students give us their class schedules, and we put together teams based on their availability, skills and idea preferences.

In the Lab, our experience has shown that groups are effective ONLY if they physically work with one another.

With the announcement of teams, uncertainty appears to subside. Teams work out their schedules to be in the lab together (a requirement), and they begin the long process of creating a desirable, feasible and viable media product.

Having a team rallied around a single idea is their first bit of proof that uncertainty is manageable, and now they control the process.