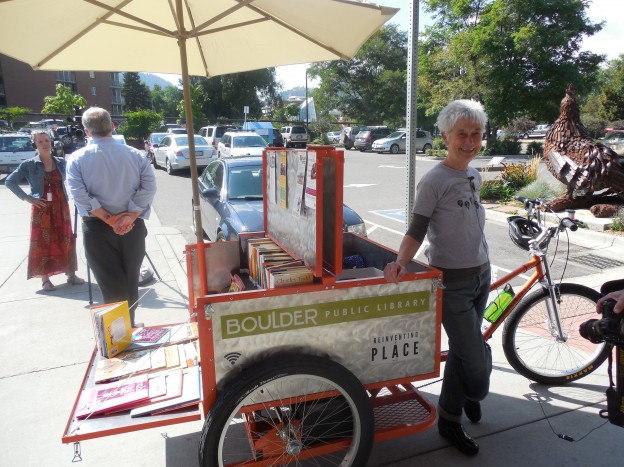 On a sunny September day in Boulder, Colo., a group of librarians from the Boulder Public Library parked a bright orange, book-filled tricycle in front of Alfalfa’s Market and lofted a sturdy sun umbrella over it to shade the curious who approached to investigate. They offered free books and temporary tattoos (“I ♥ the Boulder Public Library”) and showed off a device that streams soap bubbles whenever a new patron signs up for a library card, a transaction they can complete from an iPad right on the book bike.

What’s a book bike? It’s a concept that has caught on in a big way in Colorado, with the Denver Public Library beginning to pedal its own blue, two-wheeled mobile Wi-Fi hotspot and lending library last year and the Longmont Public Library unveiling its screaming yellow version in May. Similar book bikes can be found in Seattle, Cleveland, and Pima County, Ariz. Whatever color the bikes happen to be, the libraries see them as a way to attract new patrons and let everyone know about the many innovative resources and activities they can expect to find at libraries today, such as free streaming movies and music and online access to digital magazine collections that patrons once had to visit a branch for, sometimes only to find the crucial page torn out.

"The 21st century library is helping to be that 'third place' where people of all ages can learn essential skills necessary in our world today -- communication, collaboration, critical thinking, and creativity." -Stacie Ledden

The bike launch was a part of Outside the Lines, a week-long promotion September 14-20 during which 174 libraries (and counting) across the country, from Alaska to Florida and everywhere in between, made special presentations and staged public outreach events designed to educate people about the many ways libraries have evolved in recent years.

Aimee Schumm, one of the librarians answering questions at the Boulder book bike, holds a job title that’s becoming more common at many libraries these days: She’s the eServices manager for the Boulder Public Library.

Schumm described the many digital resources available to library cardholders, including streaming movies and music through a third-party vendor, Hoopla. Patrons download the app for their phone or computer, create an account, and then can stream any movie or song available on Hoopla. While many e-book publishers have fought to ensure libraries can only lend an e-book to one patron at a time, the same as with printed books, the copyright holders of materials on Hoopla have given the OK for multiple patrons to stream a song or movie at once.

The book bike includes an old-fashioned bulletin board with posted fliers about story times, arts events, citizenship classes, and business resource classes that the library offers and a very contemporary charging station with an array of different device connectors for passersby to juice up their phones and tablets.

“While they’re charging a device, they can talk to us about the library’s electronic resources,” Schumm said. “A lot of people aren’t aware of all the resources we have online, and we’re letting people know you don’t necessarily have to come to the library to use them.” Free access to back issues of Consumer Reports is one of the library’s most popular online features.

After launching the book bike during Outside the Lines week, Schumm said they will take it “out into the community — to rec centers, farmers’ markets, and to places that don’t have a library close by. Eventually, we might host story times and puppet shows at the book bike, and visit underserved areas.”

All these book bikes could help bring about a change in the classic image of librarians from bun-wearing shushers to fit literacy evangelists. You have to be in good shape just to pedal the heavy trike. “The bike is 250 to 300 pounds,” Schumm said, depending on how many books are loaded into it. “I was very arrogant before I first tried it, because I’m a bike rider, but it’s not easy. We ask that everyone on book bike duty be able to ride it for 30 minutes without hurting anybody or the bike. It has pedal assist — some juice to help us get up hills if we need it,” she added, but still, the librarians have been training their muscles, riding it around outside the library.

I asked Schumm what sort of outreach efforts the book bike is replacing.

“It’s not really replacing anything,” she said. “We haven’t done a huge amount of outreach before. Now we want to reintroduce people to the library and let them know this is not the library they had when they were kids.”

This seems like the part of the point of Outside the Lines week, demonstrating that libraries have converted from a destination you used to visit to places that just might visit you.

Not A Shushing Library

Stacie Ledden, one of the driving forces behind Outside the Lines, is the communications director for Anythink Libraries, the library system in Adams County, Colo., that underwent a 21st-century evolution a few years ago. “For over 50 years, it was the worst-funded library system in the state,” Ledden wrote me via email. In 2006, the citizens of Adams County passed a mill levy increase that tripled the library system’s budget from $4 million to $12 million. Pam Sandlian Smith, the Rangeview Library District director, led her staff in reconceiving the library’s mission and renaming it Anythink.

“Our board and administrative team developed what we call the ‘experience model,’ meaning that everything that we do is geared towards providing the best experience possible for our customers,” Ledden explained. “This influenced the way our spaces are designed (building around people instead of materials); our decision to go fine-free; switching from Dewey Decimal system to a bookstore-inspired, word-based system; our emphasis on hospitality; and our evolution to a participatory library, where our community members help to define their own library experience … We believe that the library is a place of ideas, imagination, discovery, exploration and creativity — the Anythink logo and brand represents that.”

Library use in the district began to increase after the changes, and for her forward-thinking efforts, Library Journal named Ledden one of its “Movers & Shakers 2013.”

“The 21st century library is helping to be that ‘third place’ where people of all ages can learn essential skills necessary in our world today — communication, collaboration, critical thinking, and creativity,” Ledden said. “These skills are not learned in a vacuum; they require all different types of interaction. So, we are no longer just that quiet space for research and study. We actually have staff T-shirts at Anythink that say “SHHH is a four-letter word” — we’re not a shushing library.”

Ledden echoed Schumm’s belief that it’s important to let people know how libraries have changed. “Ask many people if they think libraries are important and they’ll say yes, but we are still fighting against the misconception that people don’t need libraries because they have the Internet. There is still a perception out there among many people that the library is just a place you go for books. What we hope people will understand through Outside the Lines is that the library is no longer just a warehouse for books or a place to do research, but has evolved into a place of ideas, innovation, creativity and discovery.”

Innovations offered by libraries participating in Outside the Lines include access to technology such as GoPro cameras, 3D printers, Chromebooks, Oculus Rift, Google Glass, digital SLRs, iPads, sewing machines, recording studios, and even old-fashioned tools like saws and ladders. Library staff is trained to teach people how to use all these items.

At the Florence-Lauderdale Public Library in Alabama, patrons can check out guitars, Kindles, and American Girl Dolls. This week the University of Texas Libraries will be sharing tunes from their Historic Music Recordings Collection and introducing people to the new UT Poetry Center, designed to celebrate poetry and its performance. At Douglas County Libraries, south of Denver and in the heart of microbrewery country, patrons can pick up a beer tour passport, venture to the featured microbreweries to collect stamps and then return to the library to receive a commemorative pint glass. They’re running a library-themed homebrew contest for patrons too.

The Douglas County Libraries offer a beer tour to celebrate the many breweries in their area and showcase what the libraries have to offer.

ImagineIF Libraries in Flathead County, Mont. are inviting patrons to make their own 3D glasses, print an object with a 3D printer, and seek other 3D-printed objects around town.

“There’s a growing movement right now of libraries supporting entrepreneurship,” Ledden said. “We’re working to position libraries as the first stop for those starting a new biz. Libraries are the original co-working space, with beautiful, inexpensive meeting rooms. There is access to resources where you can check out your competition or get help filing patent forms. Entrepreneurs have access to personal research assistants (a.k.a. librarians) and, in some cases, could even use the library as a showroom for new products, like Google Glass.”

The Future of Libraries May Depend on All This Outreach

Ledden and others involved in Outside the Lines believe letting people know about the new happenings at libraries is crucial, because some people see libraries as dispensable in the Internet age. Ledden mentioned Tim Worstall’s recent Forbes op-ed titled “Close The Libraries and Buy Everyone an Amazon Kindle Unlimited Subscription.”

A recent Pew study found that a great majority of Americans think libraries are important — 90% of Americans think closing a pubic library would have an impact on their community and 81% of the respondents said that libraries provide resources they’d have a hard time finding elsewhere. But still, when push comes to shove on funding, Ledden thinks that libraries often get the shove. “People ‘love’ libraries,” she said, “but may not view them as an essential service and may not support them financially when there are budget shortfalls, especially when competing for funds with police and fire departments and schools.”

If libraries want to survive in this cash-strapped and digitized era, they might have to stop being quiet and pipe up about what they can offer people. “Libraries have evolved to the changing needs of our communities, but if no one knows about those changes, and that we’re here to help people be their best, then we’re doing our communities a disservice,” Ledden said. “If people in our communities don’t know that they can download e-books for free with their library card, or that we have fantastic early literacy resources, or that you can attend a cooking class on Thursday nights — that’s not their fault. We need to change how we tell our story.”

Across America, there’s an army of librarians pedaling book-loaded tricycles setting out to do just that.

Jenny Shank‘s novel, The Ringer, won the High Plains Book Award. Her stories, essays, satire and reviews have appeared in The Guardian, TheAtlantic.com, McSweeney’s, and the Dallas Morning News.